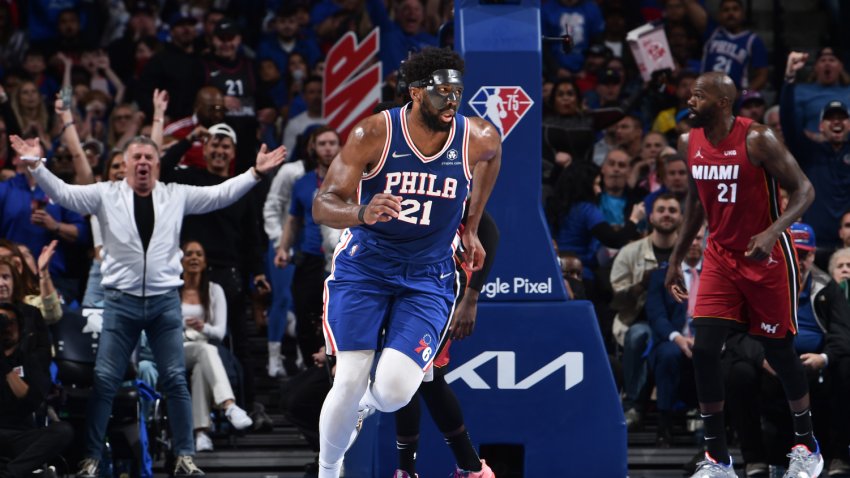 Joel Embiid didn’t save the day by himself, but his presence lifted the Sixers on Friday night and helped the team get a win it desperately required.

Wearing a black protective mask, Embiid played for the first time since suffering a concussion and right orbital fracture last Thursday. He posted 18 points and 11 rebounds as the Sixers trimmed their second-round series deficit to 2-1 with a 99-79 win over the Heat at Wells Fargo Center.

Danny Green made 7 of his 9 three-point attempts for 21 points. Tyrese Maxey also scored 21 and played a brilliant second half.

Game 4 will be Sunday night in Philadelphia. Here are observations on the Sixers’ Game 3 victory:

Embiid grits it out

Comfort was an obvious issue for Embiid. At the game’s first stoppage, he removed his mask and requested a towel from a ball person along the baseline to wipe his face and the mask. He continued that routine throughout the game. Still, Embiid’s mobility wasn’t compromised, and he didn’t seem to struggle much with jolting back into live action.

Embiid’s agility is many classes above DeAndre Jordan’s. On Tyler Herro’s first touch, Embiid hedged hard and bothered the Sixth Man of the Year, eventually forcing a shot-clock violation. The Sixers were not nearly as limited defensively, and it didn’t feel as if the team’s perimeter defense needed to be perfect.

Embiid missed two first-quarter jumpers, but his efforts to seal smaller defenders in the paint were productive and impressive. Any chance Embiid had to attack early in the shot clock appeared promising, especially against 7-footer Dewayne Dedmon. He scored four points late in the first by easily sliding past Dedmon, including a fast-break slam.

Sixers head coach Doc Rivers said pregame that Embiid’s on-court activities had been limited because of his concussion, but the 28-year-old still managed to play the game’s opening 10 minutes and 26 seconds. The Sixers held a 21-13 lead when he exited and clearly felt far better about their position in the series.

Embiid’s jumpers were wayward in his next stint, too. He air balled a second-quarter jumper and didn’t make one until 43 seconds into the third period.

Pushing to play through multiple major injuries says plenty about Embiid’s toughness, but it was also laudable that he initiated contact and threw himself right into the fire of an intense playoff game. He made an important and-one layup late in the third.

The bubbling animosity between the teams boiled over early in the fourth when Matisse Thybulle and P.J. Tucker were each assessed technical fouls. The officials reviewed the incident and didn’t consider Tucker’s off-ball shove of Thybulle’s back worthy of more than a technical.

Harden takes the first, Maxey’s got the second

James Harden drove with conviction in the first half, reaching the paint often in both transition and half-court offense.

Efficiency has been a core element of Harden’s game when he’s at his best. Over the first two quarters, he scored 15 points on six field-goal attempts.

Four turnovers were a blemish on Harden’s first half, and the final one contributed to the Sixers subbing him out early. Harden was stripped on a drive — he was sure the play should have been a foul — and then picked up his third personal on the ensuing Miami possession. He sat for the final 2:15 of the second quarter.

Meanwhile, Maxey scored no first-half points after pouring 34 in during Game 2. Maxey found Green for a corner three that put the Sixers up 26-17 on a nice drive and kick, but he was overall much less involved than the Sixers prefer. Like Maxey, Lowry was scoreless in the first half. He couldn’t manage any points in the second half either, going 0 for 4 from the floor in 25 minutes. Though some of Miami’s poor offensive start was simply open jumpers not falling, the Heat did not initially adjust well to Lowry (and Embiid’s) return.

Harden committed his fourth foul with 8:12 left in the third and Rivers took him out shortly after. The Sixers then played a terrible few minutes that included Green tossing the ball out of bounds on an after-timeout possession. The veteran wing also stepped out on a fast break and had a tough time on Butler defensively.

Green’s outside shooting temporarily got the Sixers back on track. The 34-year-old snapped an 11-0 Heat run with a three assisted by Embiid, and he canned another triple to build the Sixers’ lead to 57-51. Miami kept pressuring, though, tying the game at 57-all on two Dedmon free throws. The Sixers were fortunate that Maxey then flipped into star mode.

He went on a personal 5-0 run that included a top-of-the-key three and fast-break layup. The 21-year-old seized control of the game in the fourth quarter with a few more long-distance jumpers, an off-balance runner, and a defensive gem when he chased down a steal and then saved the ball by flipping it over his head.

Harden hasn’t contributed a lot in second halves this series, but no one cared about that Friday night.

Paul Reed was Embiid’s backup and Jordan stayed on the bench.

The Sixers still played 10 men, inserting Shake Milton following Harden’s third foul. Milton made a key three-pointer at a stage when the Sixers were floundering offensively. He earned himself a second-half stint and held up fine defensively. Milton’s odds of pulling that off are substantially higher than Furkan Korkmaz’s.

Matisse Thybulle seems to be trending slightly upwards on the confidence and rhythm fronts after being ineligible to play in Toronto last series because he’s not fully vaccinated. During the second quarter, he recorded a dunk, steal and block all in under a minute. He remained the main defender on Herro, who had 14 points on 5-for-15 shooting. The Sixers kept making mistakes that presented Herro with open looks, and he capitalized with two three-pointers late in the third.

After a 1-for-9 performance in Game 2, Green’s bounce-back shooting game was big. The Sixers also were a tad fortunate that Miami had a cold night (7 for 30 from three-point range), though the team’s collective defensive effort was strong.