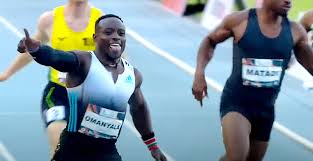 Olympic silver medalist Fred Kerley was beaten into second place by Kenyan home favorite Ferdinand Omanyala in the 100 meters at the Kip Keino Classic on Saturday.

Shelly-Ann Fraser-Pryce won the women’s 100 in a world-leading time of 10.67 seconds to underline the 35-year-old Jamaican is not done yet and a contender for yet another gold at the world championships in Eugene in July.

Fraser-Pryce won easily as Namibian teenager Christine Mboma, the Olympic 200 meters silver medalist, pulled up with injury around the 50-meter mark and then fell.

The United States’ Kerley was the clear favorite after Olympic champion Marcell Jacobs of Italy was a late withdrawal from the race because of illness.

Jacobs was expected to compete in his first 100 since his surprise run from unknown to Olympic champion at the Tokyo Games last year. But he was hospitalized in Kenya this week with suspected food poisoning, meet spokesman Elias Makori said. The Italian athletics federation said Jacobs was admitted to the hospital’s emergency room and remained there for “observation” with a gastrointestinal illness.

Without him, Omanyala’s strong start carried him home to win in 9.85 seconds and just ahead of Kerley in 9.92. Another American, Isiah Young, was third in 10.13. The race had to be restarted because of what officials said was a technical glitch that caused a false start first time round.

“The false start really affected us but I’m happy with my opening time for the season and I will build on it from here,” Kerley said.

Italy’s Filippo Tortu was seventh in 10.24 seconds. Tortu ran the anchor leg when Italy pulled off a second sprint stunner to win the 4×100 relay in Tokyo.

Omanyala’s victory saw Kenyan President Uhuru Kenyatta jump out of his seat to applaud at the Moi International Sports Centre. Kenyatta also summoned Fraser-Pryce to the VIP enclosure to congratulate her after a blisteringly fast run in her first 100 of the year. Egypt’s Bassant Hemida was second and the U.S.′ Shannon Ray third behind Fraser-Pryce.