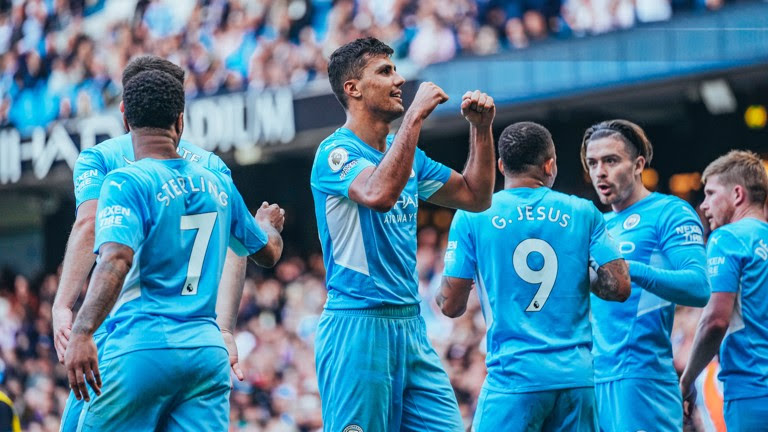 Manchester City bounced back from the midweek disappointment against Real Madrid to thrash Newcastle United 5-0 and move three points clear of Liverpool at the top of the Premier League.

Rodrigo bagged the third on the hour, before crucial late goals from Phil Foden and Sterling wrapped up a wonderful afternoon the defending champions who now move within seven points of the title.

City looked sharp from the off against Newcastle, looking to press high and force errors from the visitors.

Yet the first real opportunity came for Newcastle on 12 minutes when Allan Saint-Maximin’s cross into the middle found Chris Wood and Joelinton free at the far post but Wood’s tame header from five yards was easily saved by Ederson.

Shortly after, Kevin De Bruyne’s corner fell to Aymeric Laporte who blasted over from eight yards out with a clear shot on goal.

The breakthrough came on 19 minutes, when Ilkay Gundogan’s floated cross to the far post found Joao Cancelo who headed across the six-yard box for Raheem Sterling to nod past Martin Dubravka.

After the Magpies saw a goal ruled out for offside, Gundogan came close with a 25-yard drive that went just wide.

City continued to create chances and finally doubled the lead on 39 minutes.

De Bruyne’s deep corner found Gundogan on the edge of the box and his volley was spilled by Dubravka who kept out Ruben Dias’ close range prod but could do nothing about Laporte’s follow-up.

The Blues began the second-half with Fernandinho replacing Dias – hopefully the Portuguese was taken off as a precaution more than anything else.

The opening 15 minutes were all about control, with Newcastle chasing shadows as City knocked the ball around – until the third goal arrived and, inevitably, De Bruyne was involved again.

The Belgian whipped in a corner towards the near post and Rodrigo arrived on cue to head powerfully past Dubravka to make it 3-0.

That wasn’t the end of the end of the scoring, with the excellent Oleks Zinchenko laying on a fourth for Phil Foden to sweep home in the final minute to leave the Etihad jubilant.

And three minutes later, Sterling made it five after superb work by Foden and Jack Grealish, further boosting City’s goal difference in the process.

It was masterful stuff from the Blues and, as ever, De Bruyne in particular.

City’s goal difference is also four better than the Merseysiders after this win.

City travel down the M6 to face Wolverhampton Wanderers on Wednesday night.