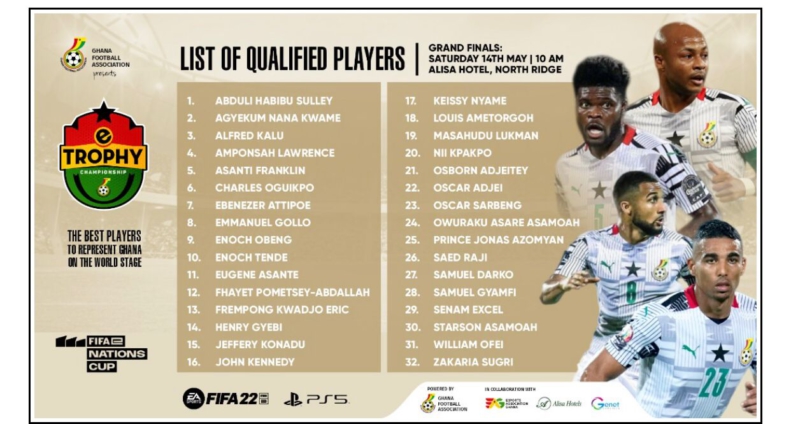 The Ghana Football Association (GFA) will host the GFA eTrophy Championship, the country’s penultimate national tournament to select top gamers to compete in the FIFAe Nations Cup, which will be held in Denmark this July.

The championship will be held on Saturday, May 14, 2022, at the Alisa Hotels in North Ridge, Accra.

Prequalifiers were held at 16 video gaming centres across the country in seven regions, with 95 players competing for 32 slots.

The pre-qualifiers had 128 players who signed up to compete for a spot in the championship.

To encourage top gamers to participate, the nine esports clubs in Ghana that have already been approved by FIFA to compete in the FIFAe Club Series were given automatic slots for one top player from each of their teams. The remaining 23 slots were fought over by the other players.

The players who have qualified to compete at Alisa Hotels this Saturday for a spot in the GFA’s FIFAe National Team are as follows:

Following the GFA eTrophy Championship, the top six winners will be selected to represent Ghana at the FIFAe Nations Cup.

They will go through a tough training program to prepare for the worldwide assignment.