Jimmy Butler the hero as Heat close out Sixers in Game 6, reminding them of what they lost 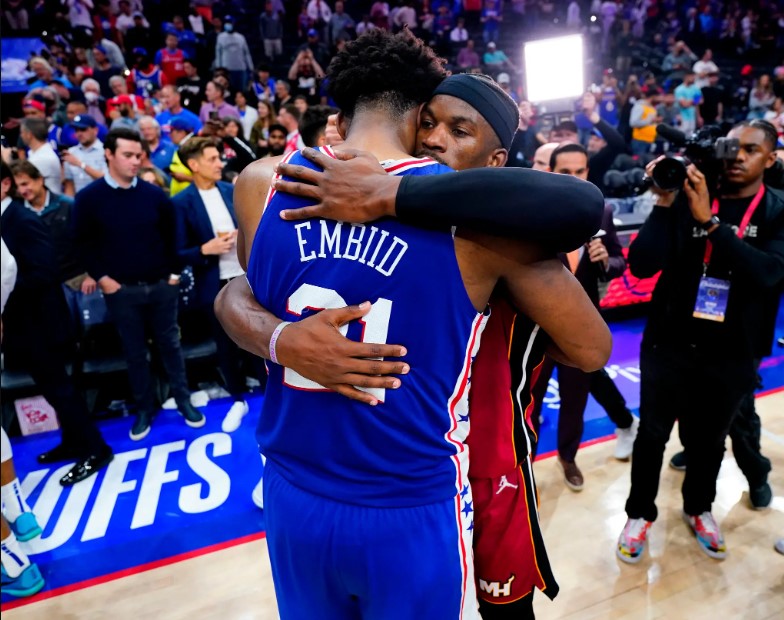 As soon as their playoff game ended Thursday night, Jimmy Butler of the Miami Heat found Joel Embiid of the Philadelphia 76ers to embrace him and say goodbye. The two stars were teammates in Philadelphia during the 2018-19 season, and there was a time when Butler thought he might remain in the city longer. The 76ers had other plans, though, and that slight has stayed with Butler.

Moments after he embraced Embiid, Butler was asked what he had said.

“That I love him; I’m proud of him,” Butler said in a television interview. “Yes, yes, yes, I still wish I was on this team. I definitely love the Miami Heat though, man. I’m glad that I’m here.”

The Miami Heat are glad, too.

In the three seasons since he moved south from Philadelphia, Butler has led the Heat to the Eastern Conference Finals twice. The 76ers, who were on the cusp of a conference finals berth with Butler and Embiid, are still trying to figure out how to get past the second round.

“He wasn’t going to let this go to seven,” Coach Erik Spoelstra said of Butler, who scored 32 points as the Heat eliminated the 76ers.

On Thursday, Butler scored 32 points to help his Heat eliminate the 76ers with a 99-90 victory in Game 6.

“He gets incredibly desperate in close games or when he sees the light at the end of the tunnel to close out a team,” Heat Coach Erik Spoelstra said. “He’s not going to leave it to chance. He saw the opportunity — ‘Hey we have an opportunity to end this tonight’ — and he wasn’t going to let this go to seven.”

“Jimmy’s always been this for us in the playoffs,” Spoelstra told reporters before the game as he was prodded about Butler’s role. “Whatever’s needed. And it might be different game to game.”

Butler is known for a lot of things, not all of them flattering. On his best days he provides stifling defense and potent offense, but he also has a reputation for irritating his teammates and coaches, and forcing his way out of teams. He can work himself to the point of exhaustion in the service of winning a game, or launch into a screaming fight in a sideline huddle.

That happened in March, when he and Spoelstra had to be separated by other players and coaches multiple times. Spoelstra laughed it off after that game, attributing the moment to tempers flaring during a loss.

In the playoffs, Butler has shown his best side.

“Jimmy is a great competitor,” Spoelstra said Thursday. “I think he’s one of the ultimate competitors in this profession. I think a lot of things get lost in translation.”

Game 6 took place on the third anniversary of a painful day in Philadelphia sports history. On May 12, 2019, the 76ers were tied with the Toronto Raptors in Game 7 of an Eastern Conference semifinal series when Kawhi Leonard, then with the Raptors, launched a final shot from in front of the Raptors bench as time expired. The ball hit the rim in three different places before finally falling through the net, ending the 76ers’ season.

Butler was on the court that day, watching helplessly from the lane as Leonard’s shot danced around the rim and then dropped, but he never got a chance to answer it the following season. The 76ers were not willing to commit to Butler over the long term, and he left that summer and joined the Heat in a sign-and-trade deal.

He carried Miami to the N.B.A. finals in the bubble in his first playoff run a year later, and now, after a first-round exit last year, he is headed back to the conference finals after helping the Heat post the best record in the Eastern Conference this season.

He’s also keeping score. After finishing off his old team, Butler was caught on the camera by a Miami television station exclaiming, “Tobias Harris over me?”

Like Butler, Harris, who still plays for the 76ers, was acquired by Philadelphia during the 2018-19 season. But the 76ers signed him to a five-year deal worth $180 million the same summer the team sent Butler to Miami.

“Now I’m where I belong,” he told reporters. “I guess, where I should have been a long time ago. A place where I’m welcome.”