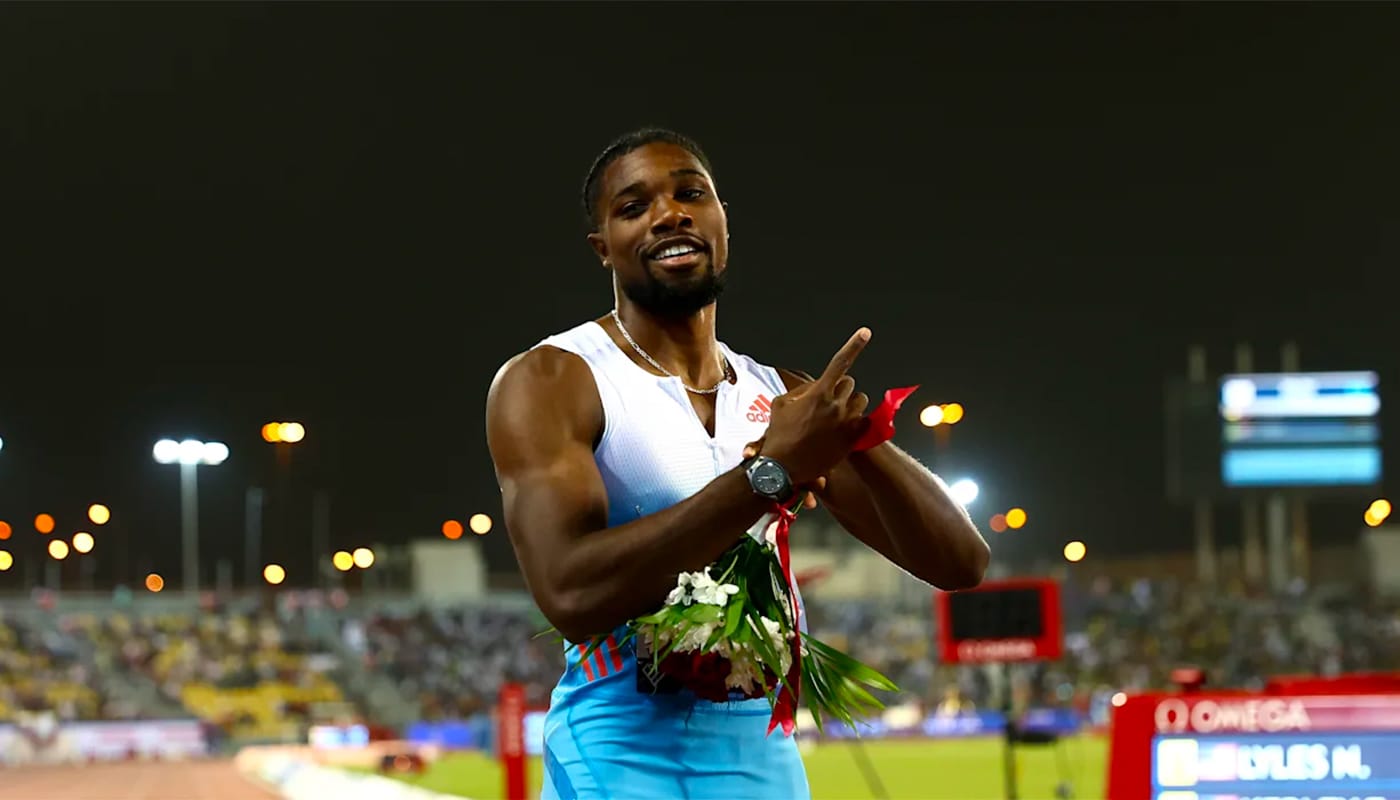 Olympic bronze medallists Noah Lyles and Gabrielle Thomas were the stars of the show at the season’s opening Diamond League athletics meet in Doha, Qatar, on Friday (13 May).

On a windy, blustery evening in the Qatari capital, which claimed the men’s pole vault as it was too dangerous to vault in the strong winds, Lyles and Thomas shone – with the latter equalling the meet record in her race after the wind died down below the legal limit.

There was also joy for Grenada’s Anderson Peters, who broke the 90-metre mark in men’s javelin for the first time and set a new Americas continental record with a throw of 93.07m, good for fifth on the all-time list.

You can re-live all the action from Doha in the Olympics.com live updates, below.

The final Diamond League race of the night is the men’s 3000m steeplechase.

This race starts off very tactical and it’s not until the last lap when Sofiane El Bakkali, the Olympic champion, and Ethiopia’s Lamecha Girma make a move.

The Moroccan and Girma are neck-and-neck all the way as El Bakkali out-sprints Girma to take it at the line in 8:09.66, one-hundredth of a second in front of the Ethiopian.

Olympic silver medallist Jakub Vadlejch of the Czech Republic also clears 90m, with a 90.88m effort a new personal best too for silver.

Tamberi was seventh, only clearing 2.20m.

British star Dina Asher-Smith, returning to the site of her 2019 world title in this distance, comes home third.

The winning time of 3:35.70 is more than four-and-a-half seconds down on his year’s best set last weekend at the Kip Keino Classic in Nairobi.

Timothy Cheruiyot does break his season’s best though in second with a 3:36.16; Ethiopia’s Teddese Lemi is third in 3:37.06.

In one of the most eagerly-anticipated races of the night, USA’s Noah Lyles has taken the win in the men’s 200m.

His 19.72 (just over the legal wind limit, with a +2.1m/s tailwind) was 0.03 quicker than teammate Fred Kerley; Olympic champion Andre de Grasse of Canada was edged out for third (20.15) by Trinidad and Tobago’s Jereem Richards in a photo-finish.

It was heavily wind-assisted though, with the gauge reading +3.8m/s.

Tobi Amusan of Nigeria and Britany Anderson of Jamaica dead-heated for second in 12.44.

Peter Bol of Australia and Marco Arop of Canada complete the top three.

Elsewhere, the men’s high jump featuring Messrs. Tamberi and Barshim, and the men’s javelin, are under way.

7:41pm – Dos Santos breaks meet record in hurdles
Wow, the track action is living up to its billing!

Benjamin himself crosses the line second in a season’s best 47.49.

Ireland’s Thomas Barr is third some way back in 49.67.

7:35pm – Ricketts wins heavily wind-affected triple jump
All over in the women’s triple jump, where Jamaica’s Shanieka Ricketts posted the best jump of 14.82 (+6.5m/s) on her third attempt.

The wind really messed with run-ups and the competition today, but that didn’t put the Jamaican off.

World indoor silver medallist Maryna Bekh-Romanchuk of Ukraine takes second with a 14.73; Dominica’s Thea Lafond gets third with a 14.46.

As for Patricia Mamona, she finished sixth.

Burundi’s Francine Niyonsaba, the Rio 2016 800m silver medallist who moved up to compete at 5000m (and won last year’s Diamond League crown at that distance), clocks a world lead 8:37.70 to win the race.

7:15pm – Chase Ealey leads USA 1-2-3 in shot put
The women’s shot put event is the first field event of the day to conclude, with American Chase Ealey topping the standings in a U.S. sweep of the top three spots.

Jessica Ramsey completed the top three with an 18.99m on her fourth attempt.

Bahamian star Shaunae Miller-Uibo was third in 51.84. That headwind really affected the athletes.

Rojas holds the meet record in Doha of 15.15m from last year, but all eyes will be on Mamona.

As a reminder, the ‘final three’ format – which previously saw the top three after five jumps progress to a single winner-take-all last jump – has been adjusted for this year.

The top three will still be the only ones in the final round, but their final-round result will no longer determine the winner, with all six rounds counting.

Some unfortunate news to start off with today. The men’s pole vault has been cancelled due to high winds in Doha.

Sadly, it’s not safe for the vaulters to compete.