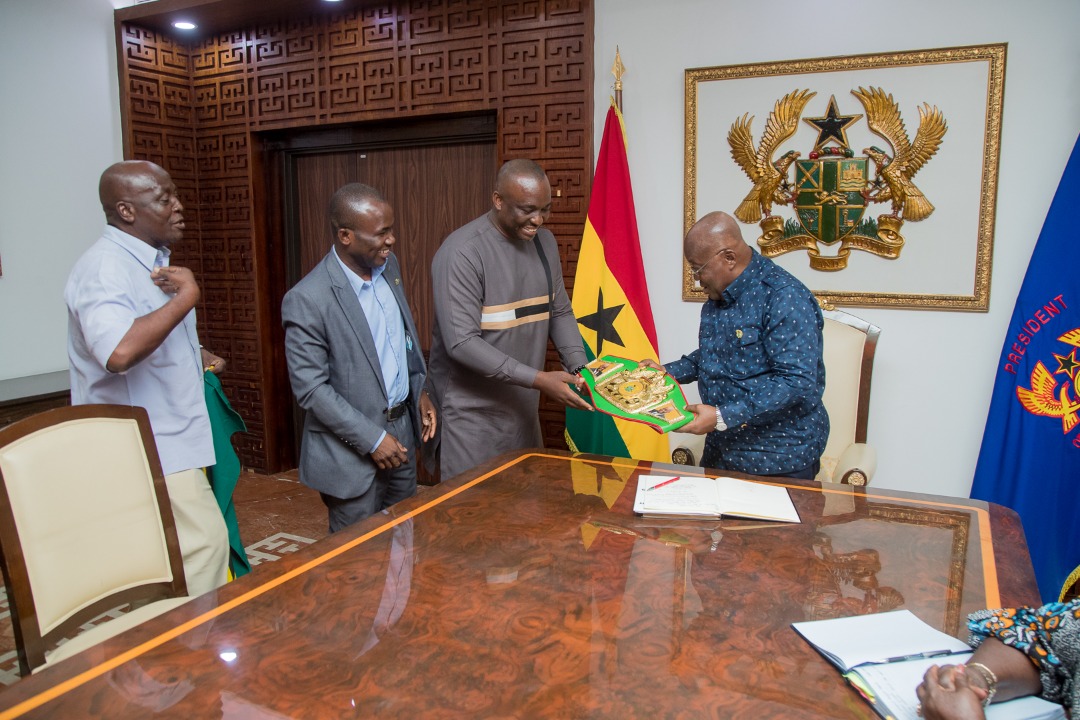 The President of Ghana Boxing Authority (GBA), Abraham Kotei Neequaye was this week officially introduced to the President of Ghana, Nana Addo Dankwa Akufo-Addo by the Deputy Minister of Youth and Sports, Hon. Evans Bobie Opoku at the Jubilee House in Accra.

The Deputy Minister of Youth and Sports introduced the GBA President, Abraham Kotei Neequaye who was elected nearly a year ago to the President and indicated that both the Ministry of Youth and Sports and NSA are very supportive to the current GBA administration and saw the need to be part of this meeting. He then asked the GBA President to introduce his executive board members and partners who accompanied him to the meeting.

The GBA President expressed his profound gratitude for the opportunity to visit President Akufo-Addo and have such an important meeting with a personality who was once a boxer and continue to be a key member of the boxing fraternity.

Fadi Fattal, Group Director of Imax Media Group took time to inform the President about their company’s solid partnership with the GBA in respect of the ongoing De-luxy Professional Boxing League, the sponsorship package of $1.7m (one million, seven hundred thousand US Dollars) for a 5-year period, the benefits and the main agenda of producing more world champions in no time.

Mr. Fattal enumerated on many aspects of their collaboration with the GBA to help revive the sport of boxing and produce more champions to solidify and consolidate the legacy of Ghana’s former world champions.

He made an official appeal to the President to help endorse the yet-to-be approved ‘President’s Title’ on the final fight night of the boxing League on 26 December this year.

The GBA President, Abraham Kotei Neequaye again expressed his joy and appreciation for the opportunity to interact with the President.

He began by eulogising the President as a former boxer and indicated that the boxing fraternity in Ghana is very happy the President is a key member and they will always be proud of him.

The GBA President indicated to President Akufo-Addo that his administration has brought back the boxing league after over 16 years’ break to help reshape the vision and career of Ghanaian boxers who have been penciled down as world beaters.

“Our main focus is to extend our league fight nights to across the regions but due to the lack of logistics and other needed facilities, the project has remained here in Accra, denying equally good boxers in other regions,” he said.

“I will therefore like to humbly request for a bus and probably two pick-ups to help facilitate our boxing programmes across the country,” the GBA President added.

Mr. Neequaye further responded to a query from President Akufo-Addo regarding how the GBA is dealing with the welfare of boxing trainers. He indicated to the President that his administration is working tirelessly to help reshape all boxing coaches by assisting them to better their lot for the benefit of the sport.

He further responded to another question from the President on how the current boxing league will be sustained and be a platform to transform young up and coming Ghanaian boxers. He explained that the support offered by the promoters of the boxing league, Imax Media Boxing Promotions and the sponsors has inspired and motivated over 120 boxers and 12 boxing gymnasiums in Accra to help churn out quality boxers from juvenile, amateur and professional levels.

The GBA President also informed the President that boxers participating in the league can now have regular bouts twice in a month and take home Gh¢1,000 every night, participating gyms also take home Gh¢1,000 every night whilst the best boxer for the night goes home with a 32′ television set, best coach gets a new mobile phone whilst the best amateur boxer also goes home with a standing fan. As well, a major prize of two brand new Renault Kwid cars are at stake for best boxer and best gym respectively at the end of the boxing league season.

The President, Nana Addo Dankwa Akufo-Addo was decorated with a special national title which has his picture engraved on it to symbolise his status as a former boxer and a member of the boxing fraternity. The GBA President was supported by Fadi Fattal, Prof. Twumasi and Hon. Bobie Opoku.

The President, Nana Addo Dankwa Akufo-Addo was very excited with the belt presented to him by the GBA, expressed his joy and thanked the GBA President and his executive board members for the recognition and honour.

The President urged his executive secretary, Nana Bediatuo Asante to take note of the request of logistics (bus and 2 pick-up trucks) made by the GBA President.

Mr. Akufo-Addo acknowledged the proposal for a ‘President’s Title’ scheduled for the night of Boxing Day, 26 December and urged the GBA and its partners to officially write to the presidency through the Ministry for Youth and Sports.

The President congratulated the current GBA administration for their foresight and uged them with their partners to keep doing the right things for the benefit of all in the boxing industry.

The Chief of Staff, Hon. Frema Opare and her deputy, Fawaz Aliu expressed their profound gratitude for what the current GBA President and his executive board members are doing and urged them to keep the momentum for the benefit of all.