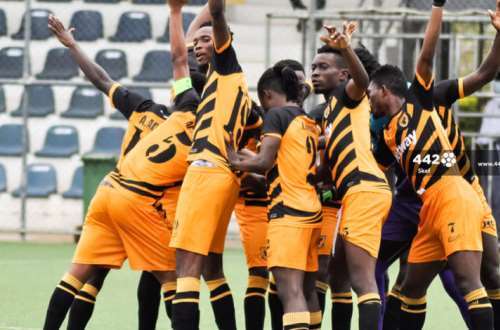 AshantiGold have appealed their relegation to the Division Two League after the Ghana Football Association Disciplinary Committee found them guilty of match-fixing.

The Miners will play in the third-tier league beginning next season, alongside Inter Allies, who were also demoted for the same offence.

Last season’s Ghana Premier League between the two sides was fixed, according to the Disciplinary Committee. Ashgold won the game 7-0, with an Inter Allies player scoring two own goals on purpose.

Ashgold have also been fined 100,000 Ghana cedis, while their President Dr Kwaku Frimpong, Chief Executive Officer Emmanuel Frimpong, coach Thomas Duah, and some of its players have all been banned.

But reacting to the verdict, the Miners said in a statement, “AshantigGold SC notes with shock and disappointment the decision of the GFA Disciplinary Committee dated 16th May 2022 (“the Decision”) in relation to the misconduct charges levelled against the club, its officials and players in respect of its 2020/2021 Ghana Premier League matchday 34 game against Inter Allies FC.”

“Ashantigold wish to state that the decision is against the weight of evidence and whatever transpired during the hearing.”

“Ashantigold has reviewed the Decision and being dissatisfied with it, has filed a Notice of Appeal against the Decision to the GFA Appeals Committee.”

“Ashantigold has also requested for the Record of Proceedings/Record of Appeal of the Disciplinary Committee hearing and will upon receipt of same, file additional grounds of appeal.”

“The club will exhaust all the legal avenues available to secure justice.”

“We ask the playing body, technical team, our cherished supporters, and other stakeholders of the club to remain calm and resolute during these times,” they added.

Ashgold were supposed to play Asante Kotoko on Thursday, but the game was postponed on Wednesday night.