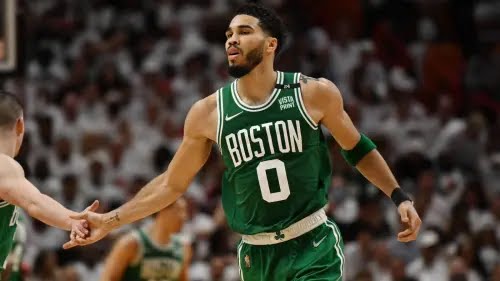 The Boston Celtics cruised to a dominant, 127-102 victory in Game 2 against the Miami Heat to even the Eastern Conference Finals at one game apiece.

Miami jumped out to an 18-8 lead early in the game, but Boston flipped the script with a 24-3 run in the first quarter. The Celtics continued to pour it on, leading by 25 at halftime and pushing the lead to as many as 34 in the fourth quarter.

The Celtics’ Jayson Tatum scored 27 points in the win and both Jaylen Brown and Marcus Smart added 24 points each. Smart, who had 12 assists and three steals, finished one rebound shy of a triple-double.

Miami stormed to victory in Game 1 after a staggering start to the third quarter where the Heat outscored Boston 22-2, going on to win 118-107.

But the Celtics hit back with a sizzling run of their own early in Game 2, outscoring the Heat 27-6 in the final seven minutes in the first quarter. Their points differential over that period was +21, even better than Miami’s +20 in their third-quarter run in the series opener.

Having been down by 10 points early, the Celtics hit back to finish the first quarter up 35-24. And they never looked back, with the half-time score 70-45 ensuring their biggest road lead in a post-season game in franchise history. The 25-point margin would remained unchanged at the end of the third quarter and the game.

Defensive Player of the Year Marcus Smart had missed game one due to a foot sprain suffered in the series-clinching win over the Milwaukee Bucks.

He said: “I felt bad that I couldn’t be out there with my teammates, to go into battle with them… it was tough not to be out there.”

His return changed not just the game, but the complexion of the entire series. Smart finished with 24 points, 9 rebounds, 12 assists and 3 steals, plus just one turnover in 40 minutes.

That saw him become the first Celtic with at least 20 points, 10 assists and three steals in a playoff game since 2012.

Smart – having shot just 1-of-10 in the first half – found his form from deep, adding five three-pointers from 12 attempts.

And he dug into his bag of tricks in the second half with a brilliant shot over the backboard, before sitting down Max Strus with some superb ball-handling.

But even more important than his offensive output was his defence, keeping Miami star Jimmy Butler quiet, after Butler ran riot with 41 points in Game 1. Butler also had 9 rebounds, 5 assists and 4 steals in an incredible performance in the series opener, in which Boston were also missing centre Al Horford (Covid protocols).

Butler was limited to 29 points, 6 rebounds and 3 assists in Game 2. But in a key difference, he was sent to the line just eight times compared to 18 in Game 1.

“It has to hurt. They tried to embarrass us, and they did embarrass us. We have to realise that,” Butler said.

He added he was ‘selfish’ at times. “I think I gotta do a better job of getting everyone else involved… I think I got a bit selfish on the offensive end.”

Besides Butler’s 29 points, the rest of the Heat starters added a combined 31 points.

Jayson Tatum led Boston in scoring with 27 points, 5 rebounds and 5 assists, while Jaylen Brown added had 24 points and 8 rebounds.

Horford returned from Covid-enforced absence and added 10 points on perfect 4-of-4 shooting, while Derrick White, who started Game 1 in place of Smart, missed the second game to be with his wife for the birth of their baby.

Smart credited his experienced combination with Horford as crucial to their success: “Just our poise, we were under control… we know what it takes.”

Celtics coach Ime Udoka said: “It was great to have them back, they’re a calming presence.

“I don’t think we played as poorly as the last game suggested. We won three quarters of that game but we saw a lot of positives and areas that we could attack.”

The Celtics went 9-of-11 from three-point range in the first period, an equal franchise record for most made threes in a quarter in the playoffs. It was especially remarkable given the Heat were the best team in the NBA at defending three-point shots this season, allowing opponents to score on just 33.9% of attempts.

Boston finished the first half having scored 12 of 19 attempted threes at the half, just under halfway towards the NBA playoff record for threes in a game (25). They would finish the game on 20 made threes from 40 attempts (50 per cent), draining twice as many as the Heat.