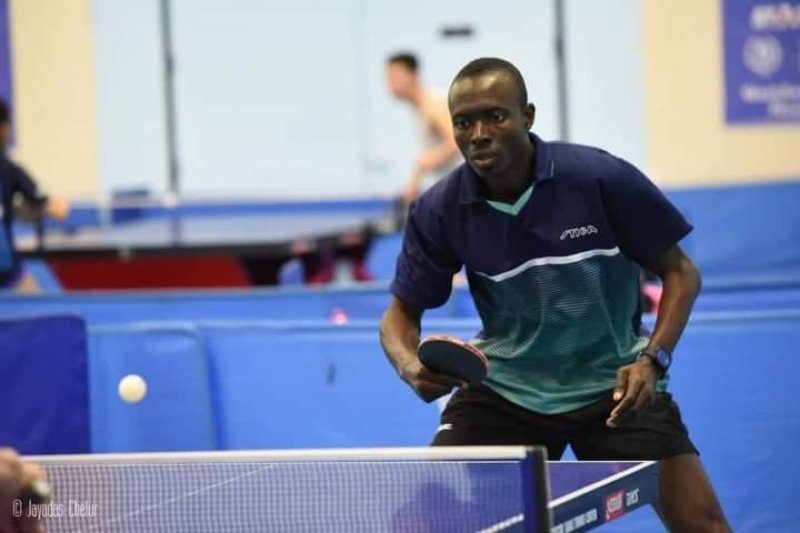 Six-time SWAG Awards winner, Derek Abrefa is in the news as he is displaying marvelous Table Tennis to fans in Nigeria at the qualifiers for the World Table Tennis Championship.

Abrefa defeated Nigerian naturalised Benin professional and top seed who is based in France 3-0 to be the only Ghanaian male table tennis player to qualify for the 2023 World Table Tennis Championship to be hosted in South Africa.

In the singles event qualifier, he defeated Jimo Alvaro 3-0 in his first singles event match. In his second match, he beat Bangoura Abdoulaye 3-0 to top his group to qualify to the main draw of round 16.

Abrefa who got injured during his fight for black Loopers in the team event overcame all odds to stamp his authority by defeating Nigerian naturalized Beninois, Olabiyi Monday 3-0 in a tough encounter in the last match in the round of 16 which lasted for over 30 minutes. Olabiyi is a pro based in France.

The whole hall was tensed during their match, and the Ghana top seed is very happy with the victory.

“I met Abrefa in the team event. I won 3-2 in a tough encounter. Despite it was 3-2, I had the confidence I will beat him to qualify for the world championship. Looking at my training in France preparing for this event,” Olabiyi said.

“Abrefa came with a different game formation and took me by surprise behind the table. He is indeed a great player who is able to turn all odds during a tough match and I congratulate him for his qualification to 2023 WTTC,” he added.

Derek Abrefa has advanced to the top 8 (quarter finals) and he is keen on getting to the medal zone of a tournament in which many foreign based players have come to fight for the 5 slots in African Zone 3.

All players that made it to the round of 8 have secured a slot for 2023 World Table Tennis Championship.

Abrefa is the only Ghanaian to make it into the top 8 to qualify Ghana to the World Table Tennis Championship.