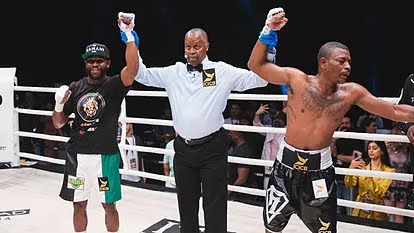 Moore, 45 years old, received free boxing lessons, although he was proud and showed great resistance, Mayweather Jr. took him to school and although it was an exhibition fight, Floyd showed the great boxing that took him to the highest in the history of boxing.

Moore, despite this being an exhibition bout, was given a torrid time by his opponent

From the first bellMayweather took control of the action, in the first two rounds we saw the “Money” we are used to: he walked backward, defended himself, and then counter-punched.

After the third round, Mayweather went on top of Moore, punished him with all kinds of punches, threw him up and down, put him in bad conditions, took him to the ropes, and there he threw all his arsenal.

Moore couldn’t get out of trouble, he showed desire, but he lacked weapons: at times he went forward, but Mayweather played with him, lowered his guard, showed his face, and danced inside the ring. A delight for his fans.

After eight rounds there was no winner

As it was an exhibition fight there was no winner or loser, although Mayweather Jr.dominated the entire fight, his hand was not raised as the winner. The referee raised the hands of both fighters.

Because it was an exhibition fight there was no winner, however, Silva showed his progress in boxing and it is very possible that in his next fight he will face Jake Paul.