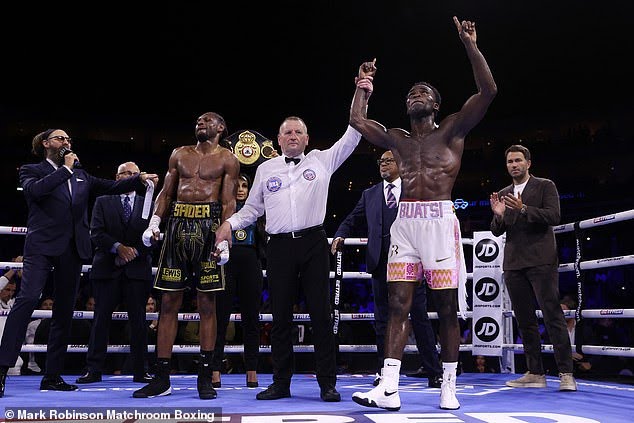 Joshua Buatsi moved closer to a light-heavyweight world-title shot by beating Craig Richards on points in an all-British classic in London.

Buatsi, a 2016 Olympic bronze medallist, has now won all 16 of his fights since turning professional in 2017.

The fight was an eliminator for Dmitry Bivol’s WBA title.

“We want the world title. We’ve made it very clear. We are ready,” Buatsi said post-fight.

Both Londoners felt they had done enough to win, with Buatsi – who was staggered in the eighth round – facing his toughest test to date.

“It couldn’t have been a great fight without Spider [Richards] so maximum respect to him,” he told BBC Radio 5 Live.

“It takes two to do it and he did it. He pushed me every round. I knew it was a close fight but I’d say I hurt Spider more. You could argue for both.”

Buatsi and Richards serve up classic

It was a close contest involving two British fighters operating at world level.

Buatsi, 29, started the fight stronger. The Croydon man unleashed left and right hooks in the closing seconds of round one. An overhand right stiffened his opponents’ legs at the start of the second, before Richards was able to pierce Buatsi’s guard with a strong uppercut in a close round.

Both men had their successes in the third. Buatsi landing ferocious punches to the body, the taller and rangier Richards able to counter with jabs and uppercuts. The fight had become a real tactical battle.

Another sustained Buatsi attack had Richards back-peddling in the fifth round, and again in the sixth, but he was weathering the storm, waiting for Buatsi to tire, before firing back.

The fight then exploded in a terrific eighth round as Buatsi suffered the biggest scare of his professional career. He was caught clean with an uppercut and clearly dazed. Richards went in for the finish, but a wobbly Buatsi was still letting his hands go; and even landing.

Fans at the O2 Arena were on their feet as both men staggered back to their corners.

Buatsi recovered in a quiet ninth and had Richards hurt in the 10th with a flurry of punches.

Not wanting to leave such a close fight in the hands of the judges, Richards and Buatsi both let their hands go in the championship rounds.

Richards was gracious in defeat, saying: “I finished strong but credit to Joshua. A hell of a fighter. I should say thank God for this occasion, thanks to Josh, a good dance partner.”

He added: “I think the fans are the winners today. We put on a hell of a show.”

What’s next for Buatsi?

Buatsi’s victory is arguably his greatest as a professional, against a top-level opponent who had already shown he can mix it at world level.

In May last year, Richards, 32, went the distance in a close points loss to WBA champion Bivol – a feat made all the more impressive earlier this month when the Russian conquered pound-for-pound king Saul ‘Canelo’ Alvarez.

Buatsi has all the tools to become a world champion, albeit in one of boxing’s most competitive weight divisions.

An Olympic bronze medallist, he has the amateur pedigree. He has the backing of promoter Eddie Hearn and Anthony Joshua’s 258 management team. And under the tutelage of Virgil Hunter, he boasts one of the most respected trainers in world boxing.

But Buatsi’s shot at a world title will depend on whether Bivol opts to rematch Mexican Alvarez next.

“There is nothing in the middle now between this and a world title,” promoter Eddie Hearn said.

“I think that is where he might go. I’d love to see a second fight between these two but I know where he wants to go.

Hearn added: “I think Dmitry Bivol, if he is available towards the end of the year, that is the fight.”

WBC and IBF champion Artur Beterbiev will face WBO champion Joe Smith Jr on 18 June in a unification clash, while there also some domestic light-heavyweight options out there for Buatsi if a world-title shot does not materialise next.

He has been linked with Anthony Yarde for a number of years, while Liverpool’s Callum Smith, a former super-middleweight world champion, now operates at light-heavyweight and a clash between him and Buatsi would be an intriguing match-up.