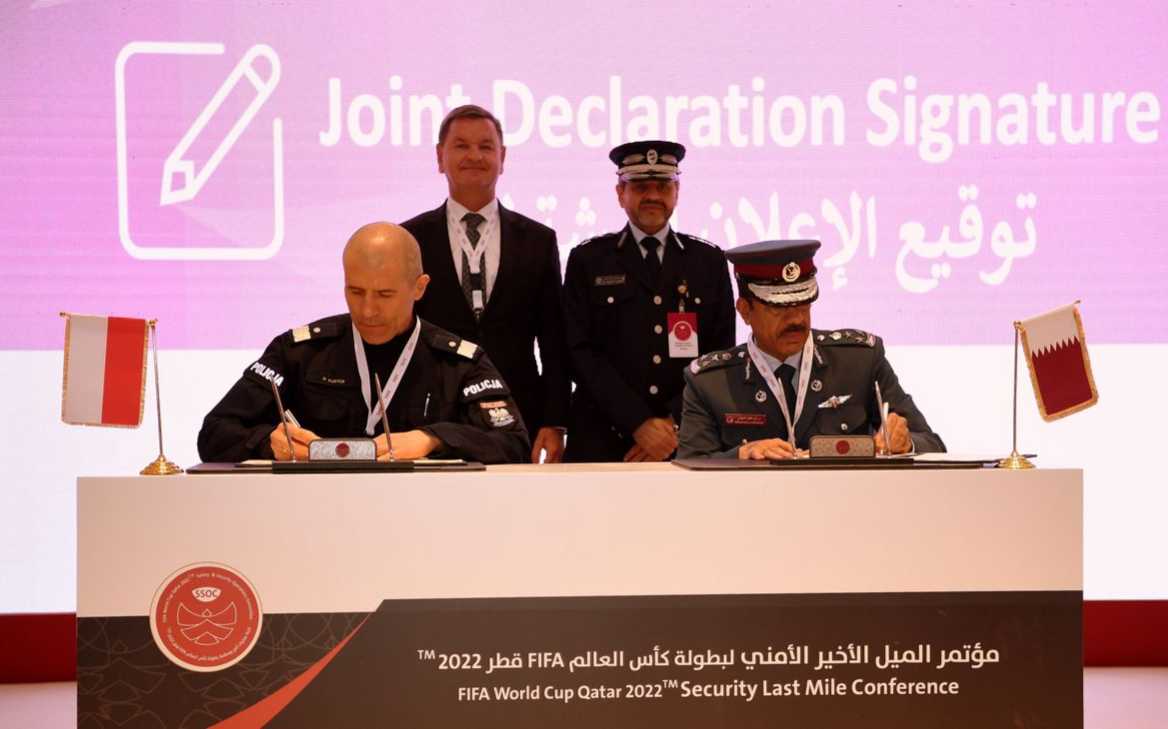 Less than six months to go for the FIFA World Cup Qatar 2022 kick off at Al Bayt Stadium, the Safety & Security Operations Committee (SSOC) of the Supreme Committee for Delivery & Legacy (SC) organised the Security Last-Mile Conference in Doha, Qatar on Sunday, May 22. The event, which has attracted international participation, aims to outline Qatar’s readiness to host a safe and secure tournament and promote greater cooperation between law enforcement bodies in Qatar and worldwide.

More than 40 delegations representing the qualified countries, as well as representatives from the United Nations, FIFA, the SC, Ministry of Defense, Ministry of Interior, Internal Security Force (Lekhwiya), the FIFA World Cup Qatar 2022 LLC, Interpol and Europol, as well as representatives from other relevant stakeholders, participated in the opening day of the conference on Sunday. The conference agenda includes a tournament overview, security risk assessment, security planning, security procedures at tournament facilities, cybersecurity requirements, and communication and cooperation with international partners.

During his opening remarks, Eng. Abdulaziz Al Ansari, SSOC Chairman, said the conference is the culmination of extensive coordination efforts between different parties that saw the exchange of resources and expertise between different countries and law enforcement bodies. He added that the conference provides participants with an opportunity to review security achievements and reaffirm the commitment made by tournament organisers to hold the most secure edition of the FIFA World Cup to date.

Eng. Al Ansari added: “The State of Qatar is ready to host the largest sporting event in the world. Our country enjoys the highest levels of security, bolstered by a world-class police service. Qatar ranks first in all global security indicators, including an exceptionally low crime rate. Our ability to host safe large-scale events was proven most recently during the COVID-19 pandemic, where we were able to successfully manage a number of health and security measures simultaneously.”

“Our security abilities were proven in exemplary fashion when Qatar hosted the FIFA Arab Cup in 2021. During the tournament, we proved our security, logistical and organisational readiness by testing our abilities to organise a safe and secure World Cup,” added Al Ansari.

Eng. Al Ansari also said this week’s conference constitutes a significant milestone as it represents the lead-up to the FIFA World Cup, which will be held from 21 November to 18 December. The importance of the event, according to Eng. Al Ansari was reinforced by the calibre of workshops and discussions – shedding light on preparations, including a thorough assessment of different scenarios and the best way to deal with them.

“With only months to go until the tournament, we felt it was necessary to organise a conference that brought together security experts from the sports industry alongside participating countries to discuss and agree on practical plans for the event,” Eng. Al Ansari added.

Eng. Al Ansari also said the conference will witness the signing of the Joint Declaration of the FIFA World Cup Qatar 2022 on exchanging information between Qatar, as the host country, both participating and non-participating countries, and relevant international organisations. It will also witness the activation of the International Police Cooperation Centre (IPCC), which coordinates procedures and the exchange of information between representatives of international police agencies of qualified countries, representatives of international organisations, and countries participating as observers to enhance safety and security during the tournament.

Qatar’s readiness to host the FIFA World Cup was also proven during the “Watan” simulation exercise which saw security, civil and military authorities from Qatar engage in a number of dummy exercises and training programmes in participation with regional and international countries, according to Eng. Al Ansari. He also renewed the State of Qatar’s welcome to everyone and its keenness to cooperate with all parties.

Also participating in the opening event was Helmut Spahn, FIFA’s Director of Security, who stressed that the level of integration and partnership that has been achieved with the FIFA Security and Safety Operations Committee for Qatar 2022 reassures that the tournament will be delivered to the highest safety standards. Spahn added that the State of Qatar has spared no effort in building comprehensive international cooperation, something that FIFA has been very supportive of from the start.

Spahn explained that the establishment of the IPCC is a major achievement and that data-sharing agreements have also been signed to prevent troublemakers and hooligans from entering the country. Additionally, training and capacity-building partnerships have been strengthened through a number of memoranda of understanding signed between Interpol, the European Union and a number of other parties.

He also pointed out that FIFA’s human rights requirements have been integrated within all SSOC work mechanisms as part of a comprehensive working relationship with the FIFA security team. Spahn also reiterated that the plans put in place by tournament organisers had been adopted by key partners.

When taking all the efforts made by Qatar into account, Spahn confirmed that FIFA is confident that the country will deliver a safe and secure tournament for all participants.

Since being established in 2012, the SSOC has been working closely with FIFA, said Spahn. He praised the teamwork and tireless efforts made by the State of Qatar. He also pointed out that none of the achievements would have been possible without the high level of preparedness from the authorities in Qatar, and without the collective work of international law enforcement bodies.

Spahn confirmed that participating in this conference less than 200 days before the start of the tournament confirms the importance of coordination and cooperation between international law enforcement bodies. He also pointed out that each host country faces its own set of security challenges as was seen in recent tournaments in Germany, South Africa, Brazil and Russia. In conclusion, Spahn expressed his gratitude to the SSOC for providing this opportunity to be under one roof with such a large number of representatives from governmental and international bodies.