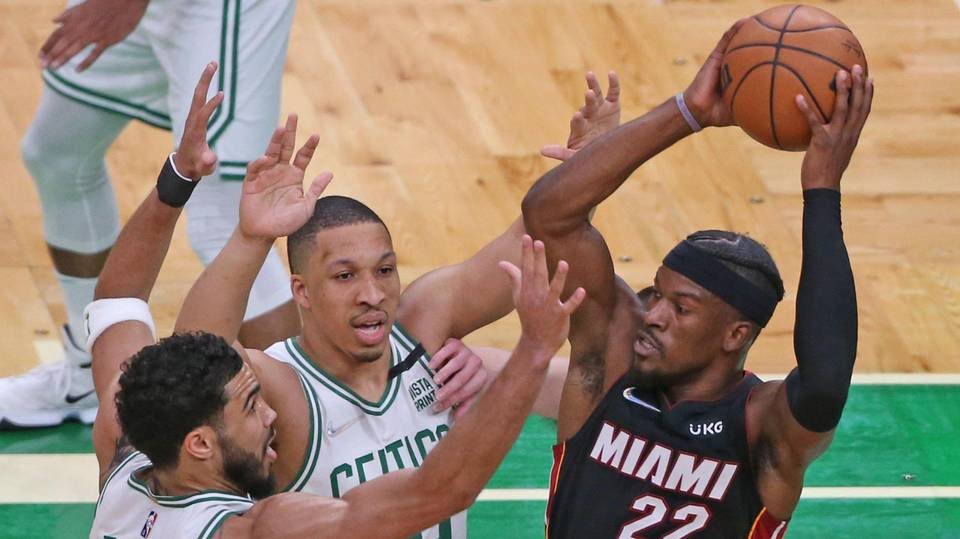 Even without Marcus Smart (ankle) in the mix, the Boston Celtics defense was on an entirely different level in Game 4 against the Miami Heat Monday evening.

Looking to tie the Eastern Conference Finals up at two with a home win, Boston yielded all of 11 points in he first quarter en route to taking an 18-point lead after 12 minutes.

How bad was it for Miami? The team had scored all of one point until Victor Oladipo hit a three-pointer with 3:22 remaining in the opening stanza. After posting 22 points in the second quarter, Miami scored all of 19 points in the 12 minutes coming out of halftime. It was a wrap from there.

Jayson Tatum scored 31 points on 8-of-16 shooting from the field. Robert Williams, Derrick White, Payton Pritchard and Jaylen Brown all added double digits in what was an absolutely stellar overall team effort.

Below, we look at four takeaways from the Boston Celtics 102-82 win over the Miami Heat to even the series up at two Monday evening.

Miami’s starters scored all of 12 points in the first half as the team fell down by the score of 57-33 after 24 minutes.

When all was said and done Miami’s staring lineup scored 18 points in the game. The numbers are just pathetic.

When Jimmy Butler isn’t going, the Heat legitimately have no one to step up behind him. With Tyler Herro out of action in Game 4, that was magnified even further.

Boston Celtics turnover issues a thing of the past

Boston turned the ball over a whopping 23 times in Game 3. It was an absolutely pathetic performance from the likes of Jayson Tatum and Co. In fact, Tatum himself had seven turnovers.

The expectation was that this would continue without Smart in the mix for Game 4. It’s something first-year head coach Ime Udoka touched on ahead of Monday’s outing.

Apparently, they did somethig right in preparation for Monday’s must-win game. With Derrick White manning the point, Boston turned the ball over all of nine times. White himself had three while Tatum had four fewer than Game 3.

This made a huge difference for a Celtics team that still struggled shooting the ball (40%). It will need to extend to Miami Wednesday evening if the Celtics are going to regain home-court advantage in the Eastern Conference Finals.

Kyle Lowry just doesn’t have it for the Miami Heat

It’s not that Gabe Vincent played well in Game 4. He shot 2-of-9 from the field in a reserve role after starting seven games in Lowry’s stead throughout the playoffs. Rather, it’s relatively clear that the 36-year-old Lowry just doesn’t have what it takes to be a major contributor at this point in his career.

Whether it’s he nagging hamstring injury or Father Time catching up to the six-time All-Star, he looks slow and over the hill. In all, Lowry shot 1-of-6 from the field with three points Monday evening. Miami finished minus-27 with him on the court. It might now be time for the Heat to insert Vincent or Victor Oladipo in the starting lineup full-time moving forward in the series.

Golden State Warriors have to be all smiles watching Miami Heat, Boston Celtics go at it

Regardless of how many games the Eastern Conference Finals lasts, the NBA Finals will start June 2. Up 3-0 in their series against the Dallas Mavericks, the Warriors can close out the Western Conference Finals on Tuesday. A win here would give Golden State eight days of rest. If this series goes seven, the winner would have just three days off.

This is no small thing given the fact that Golden State’s injuries are piling up. Andre Iguodala (neck), Gary Payton II (elbow) and Otto Porter Jr. (foot) are all currently sidelined to injury.

As for a potential NBA Finals matchup, the Warriors have just been on a whole different level in the playoffs. They boast an 11-3 record. In those 11 wins, Steve Kerr’s squad is outscoring its opponents by an average of 12.4 points per game.

Given how beat up some of the Miami Heat and Boston Celtics players are right now, this wouldn’t be an ideal matchup for either team. Continued shooting issues for both Eastern Conference finalists could also prove to be too much to overcome in a hypothetical NBA Finals matchup against Golden State.