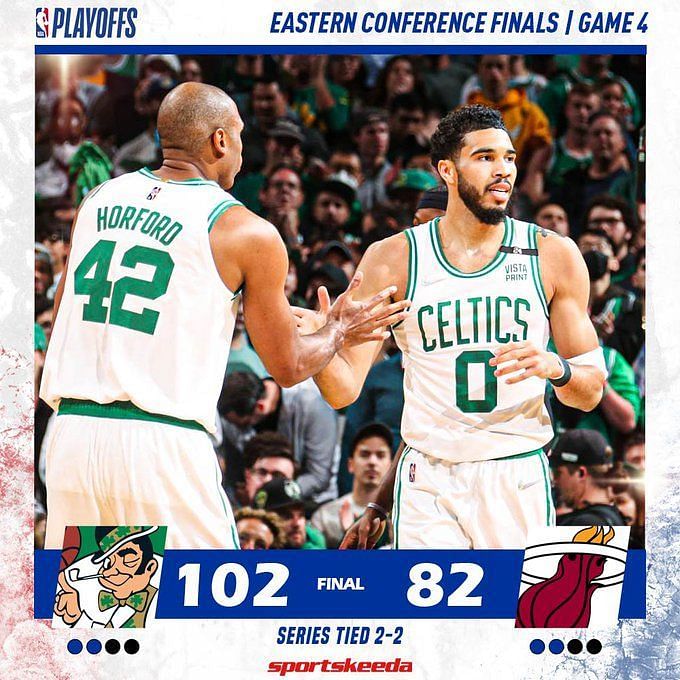 It was as if the ghost of Bill Russell or Robert Parish or Kevin McHale was holding an invisible lid over the basket, forcing every Heat shot to bounce off the rim for the game’s first eight minutes on Monday night.

There are bad starts to an NBA game.

But what the Heat offered at the outset of Game 4 of these Eastern Conference Finals wasn’t simply bad; it was unspeakably grotesque.

Miami missed its first 14 shots from the field, fell behind 26-4 and never recovered, losing 102-82 before a delighted crowd at Boston’s TD Garden.

The Heat didn’t hit a shot from the field until 3:22 remained in the first quarter. That’s the longest drought to start an NBA playoff game, for any team, in 25 years.

This was simply a night the Heat couldn’t shoot straight, and unlike much of this postseason, the Heat’s three-point shooting wasn’t the problem during the first half debacle.

In the first half, which ended with Boston ahead 57-33, Miami was 5 for 12 on threes but 6 for 27 on twos, with many of those misses coming on mid-range shots.

There was a huge disparity in free throw attempts – 38 for Boston and 14 for Miami, with the Celtics outscoring the Heat, 32 to 8, from the line.

“We’ve got to be more physical,” Jimmy Butler said. “When we shoot a lot of jump shots, it’s hard to get to the free throw line.”

There are several foul calls that can be questioned in any game, but this gap was at least somewhat a byproduct of the Heat’s lack of force and inability to consistently get to the rim, while the Celtics were the aggressor.

“We were just so poor to start that game,” Erik Spoelstra said. “A lot of it was our offensive execution, lack of doing it with force and purpose. We dug ourselves a hole and couldn’t get back and get a grip on this game. You have to credit Boston. They took control of it early. We did a lot of things poorly offensively.”

It didn’t help that Boston grabbed 25 of the game’s first 34 available rebounds and finished with a 60-39 rebounding edge.

It was so bad that Jayson Tatum outscored the entire Heat starting lineup 31 to 18, albeit with no Heat starter playing more than Bam Adebayo’s 28 minutes. The 18 points by Heat starters were the fewest by a starting group since the NBA began keeping track of this in 1970-71.

Adebayo, so impactful during a 31-point, 10-rebound Game 3, was mostly a non-factor in Game 4.

He played one of his most inconsequential first halves in memory, with three points (on one for two shooting), four rebounds (during a half when Boston out-boarded the Heat 33-20) and three turnovers.

And even when Adebayo tried to become more aggressive after halftime, he was met with resistance. Al Horford blocked his driving layup attempt in one sequence, leaving Adebayo on his backside.

He finished the night with 9 points, 6 rebounds and two assists, with only five shot attempts in 28 minutes.

Adebayo said the Celtics defended him differently than they did in Game 3 and he must now adjust.

Butler, back from missing the second half of Game 3 with knee inflammation, was off with his shot, closing 3 for 14 from the field (including 0 for 4 in the second half).

His final line – six points, seven rebounds and an assist – was uncharacteristic for a player who had played so brilliantly all postseason.

Asked if his knee bothered him, he said: “I’m straight. No excuse for how I played tonight.” Butler said the Heat “settled for way too many mid-range jump shots.”

Kyle Lowry, on a quiet 3-point night, shot 1 for 6 and had a low assist total (two, compared with two turnovers) largely because his teammates missed so many shots. He’s now shooting 16 for 54 in these playoffs.

Max Strus (scoreless on 0 for 7 shooting) and Gabe Vincent (2 for 10, six points) also couldn’t find their touch; both went 0 for 5 in the first half.

If not for 23 from Victor Oladipo, the Heat might have set first-half scoring futility records.

Oladipo had 18 of Miami’s 33 first half points, displaying an ability to hit threes (three of them) and continuing to show a knack for driving and drawing contact. He shot 5 for 7 in the first half, but 2 for 9 in the second half.

Robert Williams, back from a knee injury, was a defensive deterrent, closing with 12 points, 9 rebounds and two blocks.

It hardly mattered that Jaylen Brown shot 5 for 20. Boston had more than enough without his 12 points.

Each team was without a key piece – the Celtics were missing Defensive Player of the Year Marcus Smart due to an ankle injury, and Tyler Herro missed the game with a groin issue. Herro said he hopes to play Wednesday but admitted he feels discomfort when running.

If you predicted that Smart’s replacement, fill-in starter Derrick White, would score the first seven points of the game, give yourself a pat on the back.

By the time the Heat scored a basket from the field – an Oladipo three – the game was 8:38 old and the Celtics were leading 21-4.

“They came out and jumped us,” Spoelstra said. “Our offense really hurt us.”

Spoelstra again turned to Duncan Robinson, but he missed his only shot in seven first half minutes, but hit four three-pointers in the fourth quarter and scored 14.

The Heat has been the NBA’s best third quarter team in postseason. But Boston’s 24-point halftime lead briefly swelled to 32 in the third, before Miami rallied a bit to make it 76-52 after three.

And so this continues to be one of the more peculiar series in recent Eastern Conference Finals history, with wild swings of momentum, and each team capable of administering an annihilation – and making its opponent look like a junior varsity team – over sustained stretches.

But the Heat can take solace that if the series goes 7, two of the final three games will be in Miami.

“Whatever they’ve done to us, we can do to them,” Spoelstra said.