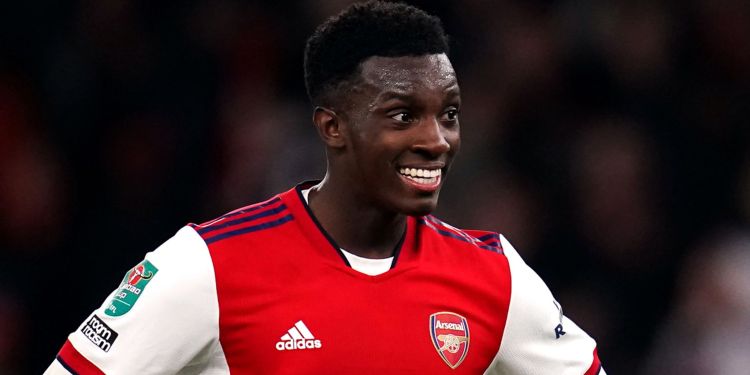 Freddy Twum, a UK-based Performance trainer Coach has revealed to Happy Sports that Eddie Nketiah will switch nationality and play for the Black Stars.

The Ghana Football Association is reported to be in the chase for Ghanaian players of foreign descent to change nationality and play for the Black Stars ahead of the 2022 World Cup.

Eddie Nketiah of Arsenal, Callum Hudson-Odoi of Chelsea, Tariq Lamptey of Brighton, and the Inaki brothers are among players, that the GFA are engaging in talks over a potential nationality switch.

According to Freddy Twum, who is the personal trainer of Eddie Nketiah stated the forward will join the Black Stars at a point in his career.

Responding to a question by host Joe Debrah on whether Ghanaians should be expecting Eddie Nketiah to play for the Black Stars, he said,

Freddy Twum has 15 players in the Premier League that he trains on a one-on-one basis with players such as Michel Antonio of West Ham.

He has over 100 players on his books.