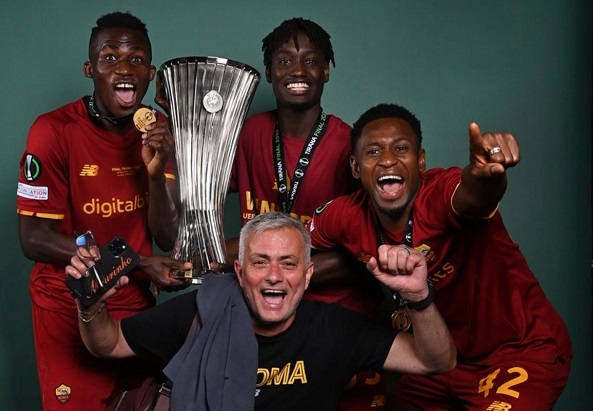 Even though the 19-year-old was an unused substitute, this will be his first trophy since joining the Italian side last season.

Roma won the trophy following a 1-0 victory over Dutch side Feyenoord at the Air Albania Stadium in Tirana, the capital of Albania.

It was also Jose Mourinho’s first season in charge of the Italians side and characteristically managed to grab a trophy for them.

Nicolo Zaniolo intercepted Gianluca Mancini’s lofted pass in the 32nd minute before beating goalkeeper Justin Bijlow with a clever flick to score the only goal of the game.

The win makes Mourinho the first manager in European history to have won all three European competitions, the Champions League, Europa League, and UEFA Cup having made five wins in five European finals.

Afana-Gyan has now joined the growing list of Ghanaian players who have won European titles including Abedi Pele, Samuel Osei Kuffour, Michael Essien, and Sulley Muntari among others.