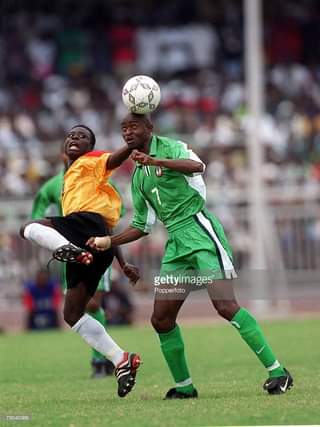 Charles Taylor was in explosive form at that time and he was selected alongside his Hearts of Oak teammates for the qualifier against the Super Eagles.

His trickery caught the attention of West, who was feared by most strikers because of his fierce looks and hard tackles.

“We [Hearts of Oak players] were surprised when they mentioned our names that we were the ones going to face Nigeria when Baffour Gyan was the only foreign-based player to join us,” he said in an interview with Dan Kweku Yeboah TV on YouTube as quoted by Ghanaweb.

“I was afraid when I saw Okocha, Nwankwo Kanu, and the likes because they were playing for a big team in Europe and I was watching them on TV and that’s the truth. And I remember discussing my fears with Ishmael Addo during the warm up.

“But I overcame that fear when after the first half when I realized that the Nigerians were afraid of me. I remember Taribo West walked to me and asked the team I play for in Europe but upon telling him that I play for Hearts of Oak, he threatened to break my leg if I keep dribbling them.”

The Super Eagles ended up qualifying for the Mundial ahead of the Black Stars.