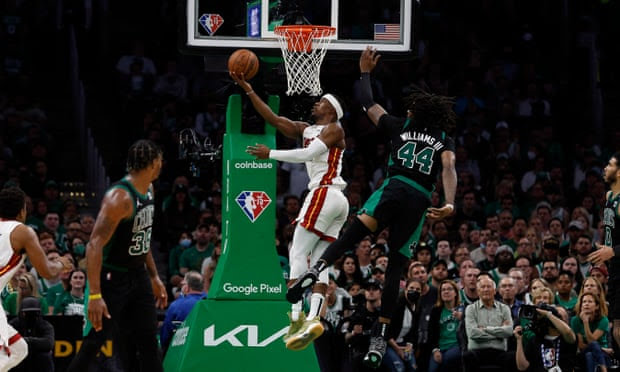 There will be a Game 7 in the Eastern Conference Finals.

With their backs against the wall, the Heat dug deep to earn a 111-103 win over the Celtics behind a spectacular performance from Jimmy Butler. Butler, who struggled in Games 4 and 5, set a new playoff career-high with 47 points (on 16-of-29 shooting) to go along with nine rebounds, eight assists and four steals.

For the Celtics, Jayson Tatum led the way with 30 points (on 9-of-12 shooting) while Derrick White scored 22 points off the bench and Jaylen Brown finished with 20 points, six rebounds, five assists and three steals.

The two teams will meet in Game 7 on Sunday, May 29 in Miami.

Jimmy Butler had 47 points, nine rebounds and eight assists and the Miami Heat forced the Eastern Conference finals to a decisive seventh game by beating the Boston Celtics 111-103 on Friday night.

Ten years after LeBron James scored 45 points in Boston to help the Heat avoid elimination in Game 6 of the conference finals en route to the first of their back-to-back NBA titles, Butler had 17 points in the fourth quarter to top James and send the series back to Miami.

With a victory at home on Sunday, the Heat would advance to the NBA finals for the second time in three years.

In the most back-and-forth game of the series, Boston took a 97-94 lead on Derrick White’s three-pointer with under five minutes to play – the first time all series the lead has changed hands in the fourth quarter. Kyle Lowry answered with a three and then added two free throws as Miami scored 11 of the next 13 points.

Jayson Tatum had 30 points and nine rebounds and Derrick White came off the bench to score 11 of his 22 points in the fourth quarter for Boston. The Celtics are trying to reach the finals for the first time since 2010.

Boston’s Jaylen Brown scored 20 points, missing a pair of free throws with the game tied at 99 after Lowry fouled out. Brown fouled out himself on a charge offensive that was assessed after a challenge on a missed dunk with 13 seconds left and the Celtics down by four.