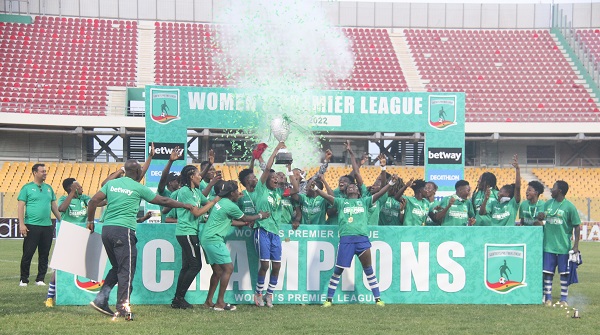 Champions, it is said, die hard and last Saturday it had to take 120 minutes of unrelenting onslaught and push back and penalty shoot outs for Techiman-based Ampem Darkoa Ladies to dethrone Hasaacas Ladies as the Women’s Premier League champions.

In their giant-killing feat, which won them their third WPL title, the newly crowned champions earned the right to represent Ghana at this year’s Confederation of African Football (CAF) Women’s Champions League.

Having overcome the pain of what seemed to be playing second fiddle to the Sekondi-based team, and earning the ticket to Africa, the outpour of emotions on the pitch which resonated among their fans in the stands and at their home, Techiman, was understandable.

The fans jubilated, the players and officials hugged and got into wild jubilation and at some time, shed tears of joy as they prepared for the medal presentation ceremony.

And no one could begrudge them. Last season when they were so hopeful of lifting their third title, they were humiliated by a 0-4 drubbing by the champions in a similar final, so Ampem Darkoa were determined not to travel that path again and they showed just how desperate they wanted to make up for that loss.

Right from the blast of the whistle for kick off, they pushed, attacked and covered every blade of the pitch but had to endure till the very end to achieve their aim.

Mavis Owusu, Ophelia Serwaa Ampem and Comfort Yeboah were the key players in attack and put the Hasaacas’ defence on tenterhooks, often saved by the woodwork or the bravery of goalkeeper Grace Banwa.

At the other end, Janet Egyir and Linda Eshun brought their experience to bear on their defence, Veronica Appiah, Doris Boaduwaa and Doreen Copson also pushing upfront as the action swung back and forth like a pendulum.

On the 14th minute, Ampem Darkoa missed the chance to take the lead but their goal was ruled offside.
And it was the four times champions who would draw first blood against the run of play, converting a spot kick after a foul in the penalty box. Success Ameyaa stepped up and converted.

Seven minutes later, Ampem Darkoa equalised also through a penalty converted by Comfort Yeboah to make it 1-1.
It was game on and the fight back on.

However, there was no change in the scoreline to end the first half.

When the second half resumed, the tempo picked up from where it ended in the first half: Ampem Darkoa pushing Hasaacas back to the wall most of the time, missing chances by a whisker.

The defending champions had their chances too, often counting on their experience but it was obvious Ampem Darkoa had mastered the art of keeping them at bay.

With the game pushed to extra time, the first time in the history of the Champions final, both sides remained resolute and thus the winners had to be decided on penalties, also the first in the competition.

With the players converting their first three kicks, it looked like the shoot outs was also going to be a marathon. Ampem Darkoa converted their fourth and fifth.

Hasaacas missed their fourth, signalling the end of an enthralling contest for the fans, a disappointing end for the former champions and no doubt a reward for keeping hope alive for the new champions.

“Yes, they are beatable. It was just a matter of time. We came determined not to lose again and our hard work and resolve paid off,” an elated Coach Nana Adarkwah screamed on top of his voice as he celebrated, his voice drowned in the shouts of joy from his players and officials.

For Hasaacas, it was a painful miss out on another chance to be West Africa Champions again and to be at Africa again to complete an unfinished business, having finished as runners up.

It was also a sober moment as they rued their second loss in the WPL final, incidentally to the same Ampem Darkoa side as they lost the 2016 final to the Nanamma.
The two clubs clash again in the final of the Women’s FA Cup on June 11 in Bantama, Kumasi.