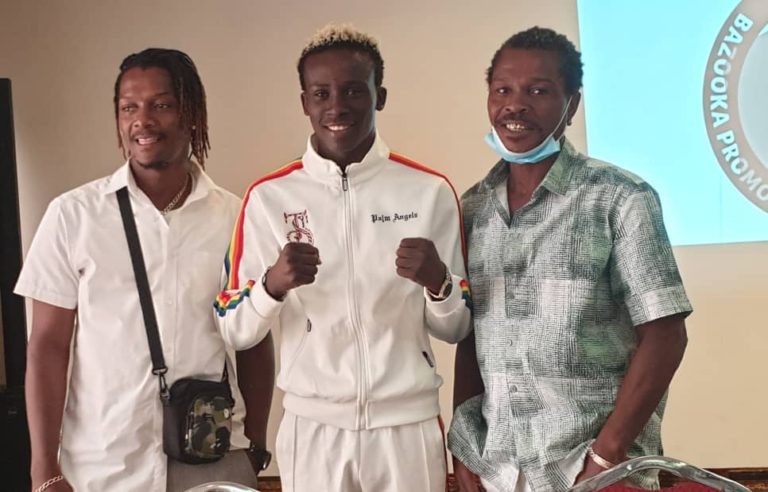 Mr. Ike Quartey brought his boxer (Samuel Takyi) to the GBA office at the Bukom Boxing Arena to request for an introductory letter to fight in South Africa. This should have been done in a written form.

The GBA has the mandate to verify the fight through the Promoter and Matchmaker in South Africa before any letter is issued for visa acquisition.

GBA recently issued out a communique to all stakeholders in professional boxing regarding the percent of purse that is due the GBA.

The GBA President seized the opportunity to engage Samuel Takyi and his manager, Ike Quartey on it and asked the boxer to sign an undertaking to assure GBA that he (boxer) will pay what is due the GBA after his international fight in South Africa from his purse.

Quartey indicated that he had similar problem with former GBA President, Moses Foh Amoaning on the same matter.

“The 2% captured by GBA will become a huge amount of money when the boxer gets to the top of his career,” said Ike Quartey.

Ike ‘Bazooka’ Quartey himself had similar case with the GBA back in the year 2000 when he fought Fernando Vargas and lost by a unanimous decision.

He actually refused to pay a percentage of from his fight purse.

As a result, he was ordered by the GBA under the leadership of Lawyer Foh Amoaning not to use the Ghana flag or national anthem.

Ike Quartey must calm down and apply effective communication and relationship with the GBA to help resolve the matter amicably.

GBA will very soon come out with the lists of renowned professional boxers who have signed the undertaking to help smoothen the forward march of professional boxing in Ghana.

The GBA President, Abraham Kotei Neequaye’s mission and purpose for Ghana Boxing is to reshape the sport to produce more champions and consolidate the legacy of our former world champions.