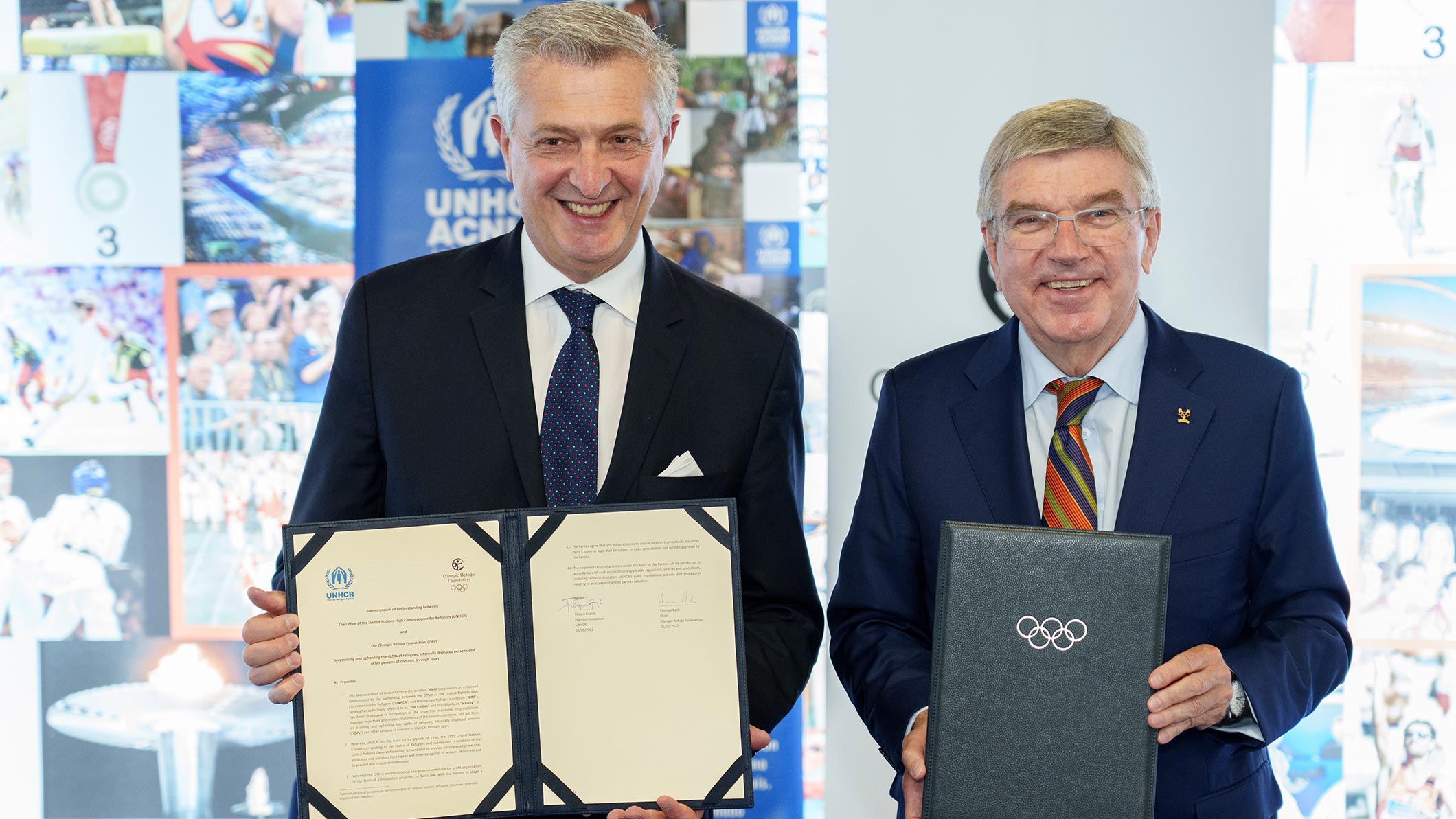 The Olympic Refuge Foundation  (ORF) has signed a new landmark Memorandum of Understanding (MoU) with the UN Refugee Agency (UNHCR), broadening their cooperation and reaffirming the commitment of the ORF and UNHCR to leverage sport to protect and support young people affected by displacement worldwide.

The MoU was signed during the meeting of the ORF Foundation Board on Wednesday in Madrid at the headquarters of the Spanish Olympic Committee. It came only a few days after it was announced that the ORF and the IOC Refugee Olympic Team had been honoured by the prestigious 2022 Princess of Asturias Award for Sport.

UNHCR has been working closely with the ORF since it was created in 2017, and with the IOC since 1994. The MoU builds on this partnership by establishing a framework within which the ORF and UNHCR can collaborate to use sport as a tool for inclusion and social cohesion, physical and mental health and well-being, protection, solutions, and resilience- and peace-building.

“In these difficult times, we need the mission of sport to promote peace and solidarity more than ever, said IOC President and Chair of the ORF Thomas Bach. “UNHCR has been an unfailing partner in fulfilling this mission. I am immensely grateful to the UN High Commissioner, Filippo Grandi, who immediately provided his support for the IOC Refugee Olympic Team when it was created in 2015 and who accepted to be Vice-Chair of the ORF. The MoU signed today further cements our joint commitment to supporting refugees through sport.

“Our UNHCR partners have told us many times that whenever they ask refugees what they need most after food and shelter, the answer is almost always sport,” Bach continued. “That is because sport is about so much more than physical activity. Sport is empowerment. Sport is inclusion. Sport is respect. Sport is health. Sport is building confidence. Sport is a positive mindset. This is what the mission of the ORF is all about – giving hope through sport to those uprooted by conflict, persecution or disaster,” he concluded.

“At this difficult moment, when for the first time more than one hundred million people have been forced to flee their homes and where responses to crises in the Global North and Global South are quite uneven, it is clearer than ever that sport has a very important role to play in refugee response,” said Filippo Grandi, UN High Commissioner for Refugees and Vice Chair of the ORF. Mr Grandi continued: “sport doesn’t just bring people together, but can provide hope and opportunity and rally people behind the refugee cause. This is certainly a key role that the IOC has played and that the ORF can play moving forward.”

Meeting in Madrid, the Foundation Board members also had the opportunity to hear updates on the implementation of the ORF’s new strategic plan and activities that were rolled out in 2021.

Measuring progress towards one million

The Foundation’s strategic four-year plan was approved in March 2021, and allows the ORF to continue and expand its activities to effect change across three pillars: Access, Adoption and Collective Action. During the meeting in Madrid, the Foundation Board members assessed the progress made in each of these areas and in the context of the Foundation’s aim for one million young people affected by displacement to have access to safe sport by 2024.

To date, the ORF has supported programmes across 10 countries, benefiting up to 85,000 young people affected by displacement and upskilling more than 800 coaches. This year has already seen the launch of the “Terrains d’Avenir” programme in France, a three-year Sport for Protection programme co-created by the ORF and the French Ministry of Sport, and the SPIRIT (Sport for Protection, Resilience, and Transformation) programme in Bangladesh. Further initiatives are set to be rolled out later in the year in Jordan, Burkina Faso and Ukraine.

Find out more about how three of the ORF’s programmes are making an impact on refugees’ lives in France, Bangladesh and Uganda.

A growing network of partners

The Foundation Board discussed the importance of the ORF’s partnership-based approach in creating sustained change, and its growing number of stakeholders through the Sport for Refugees Coalition. Launched during the first Global Refugee Forum in December 2019 by the IOC, the ORF and UNHCR, the Coalition now involves more than 80 members from over 30 countries and is co-convened by the ORF, UNHCR and the SCORT Foundation.

The ORF also established a Think Tank in 2020 made up of independent experts from leading academic institutions, NGOs, UN agencies, the private and public sector, and lived experience youth advocates. The ORF Think Tank published a preliminary position paper in Forced Migration Review in 2021 addressing physical activity, mental health and psychosocial support, and in April 2022 published an editorial in the British Medical Journal on the cross-cutting potential of sport in situations of forced displacement.

The Foundation Board also discussed the leading role the ORF will take in managing the IOC Refugee Olympic Team Paris 2024 and working in partnership with Olympic Solidarity to implement the Refugee Athlete Scholarship programme.

The ORF will continue to assist the refugee athletes, whether or not they are selected to participate in the Olympic Games. The Foundation Board agreed that the support will include, but is not limited to:

The choice of Madrid to host the Foundation Board meeting was fitting, as in 2021 the Spanish Olympic Committee opened the Alejandro Blanco Sports Centre for Refugees, in the suburb of Getafe. Almost a year on from its inauguration, around 200 refugees are already using the facility.

At the end of the meeting, an MoU was signed between the ORF, the Spanish Olympic Committee, and the Spanish Ministry of Inclusion, Welfare and Immigration, pledging to work together to support the centre and maximise its impact.

“Our ceremony today goes beyond the formal signing of a MoU,” said President Bach. “It puts the spotlight on the overarching mission of the Olympic Movement: building a better and more peaceful world through sport. Our Olympic mission is not a political mission, it is a humanitarian mission.”

“Here we can build on a strong foundation, in particular through the work of the Alejandro Blanco Sports Centre, the first centre of its kind where refugees can not only practise sports, but also find ways to integrate into their communities. It is a great example of how we can address the refugee crisis through the power of sport,” Bach continued. “For all these reasons, we are delighted that the Spanish government is joining hands with us. This cooperation agreement is a milestone and a real demonstration of our Olympic mission in action.”

The MoU signing was followed by a visit to the centre during which Board members had the opportunity to observe how it is serving as an integration tool for the athletes based there. The centre is part-funded by Olympic Solidarity and the IOC, while it has also received support from other members of the Olympic Movement, including the International Judo Federation, which has provided a tatami for judo athletes.

About the Olympic Refuge Foundation

The IOC has been helping refugees through sport since 1994 in partnership with UNHCR. In 2016, the first-ever IOC Refugee Olympic Team competed in Rio de Janeiro, and in 2021 the second Refugee Olympic Team competed at Tokyo 2020. The ORF is the latest chapter in the IOC’s commitment to providing assistance to refugees and displaced young people, ensuring support 365 days a year across the globe.