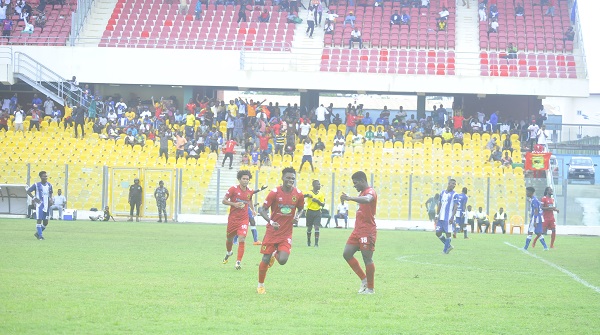 Fabio Gama became the toast of fans of Premier League champions Kumasi Asante Kotoko when he came on as a substitute to raise the game for his side which helped forward Franck Mbella Etouga to score the winning goal in a narrow 1-0 win over Great Olympics at the Accra Stadium yesterday.

Cameroonian star Etouga netted his 21st league goal of the campaign after finishing off a low drive from a through ball in the 69th minute to cement the Porcupine Warriors 25th title with two matches to spare. The goal put the Cameroun star back on top of the goal-king chart ahead of his closest rival, Yaw Annor of AshantiGold who has scored 20 goals in the competition.

Gama was introduced into the game by coach Prosper Narteh Ogum in the 57th minute for George Mfegue, and the substitution paid off when he changed the game in favour of the Porcupine Warriors. The Brazilian midfielder’s partnership with Etouga proved to be the catalyst needed by Kotoko to cement their 25th league title away from home.

It was a half of even chances for both sides but Kotoko looked dangerous going forward.
The Porcupine Warriors were first to make an attempt at goal when leading scorer Franck Etouga’s free-kick in the 11th minute went inches above the crossbar.

It was the turn of Olympics in the 17th minute when Ibrahim Sulley found a way through the Kotoko defence to lay a pass to striker Maxwell Abbey but his effort was parried by goalie Kwame Baah.

Etouga came close to netting the opener for Kotoko after 24 minutes, having connected a powerful shot from an Imoro Ibrahim corner kick but it deflected off Bokai for a throw-in.

Baah was called to action again ten minutes later when he made a fantastic mid-air save to ensure his side avoided conceding.

In the 40th minute, Samuel Quaye nearly scored a solo goal when he beat three Kotoko defenders but his left-footed shot hit the side-netting.

Just before halftime, Etouga and Samuel Boateng combined looking to cause havoc to The Wonder Club but Olympics’ goalie Seidu Ismaila saved the situation for his side.

Olympics returned from recess in high spirits and went straight at their opponents in the 52nd minute. Samuel Quaye opted to take a free-kick for his side but his effort was dealt with by Baah.

Kotoko came into the game four minutes later when Imoro Ibrahim picked Richmond Lamptey but his low drive was cleared by Solomon Adomako.

The coach’s decision paid off 12 minutes after his introduction when he helped Kotoko to open the scoring 12 minutes later. Left-back Imoro Ibrahim laid down a through ball for Camerounian Etouga to score his 21st goal of the league season via a powerful low drive.

Olympics tried to fight back when Abdul Bashiru skipped past Christopher Nettey after 72 minutes the defender, Andrew Appau, intercepted to avert any danger.

It was all an Olympics affair in the dying minutes of the game as they looked for the equaliser but Baah was always alert to deny the home side an equalising goal.

In the 81st minute, substitute Richmond Kwesi Nathan nearly scored for Olympics but his lob was parried by Baah.

Kotoko were resolute at the back to ensure they returned to Kumasi with a vital win to cement their league triumph.