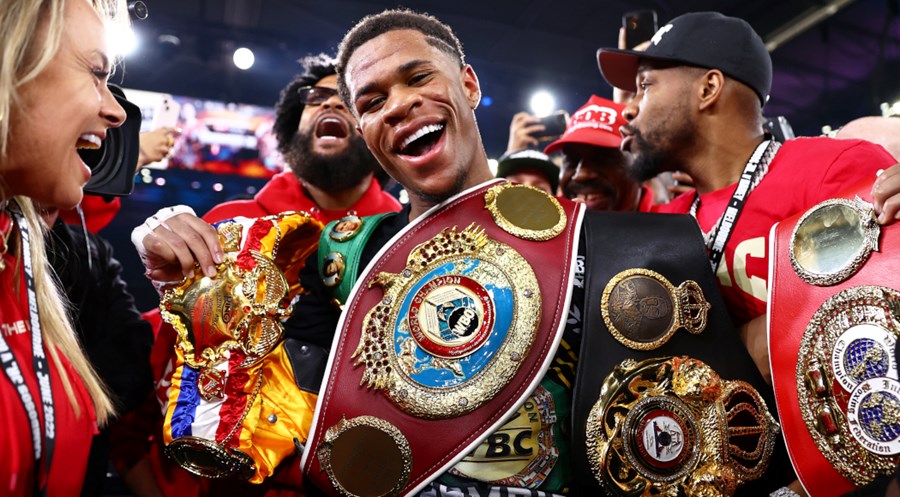 Highly-rated WBC title holder Haney, a clear favourite, successfully defended his belt for a fifth time and in the process took the WBA, IBF and WBO straps off Kambosos with a unanimous verdict in Melbourne.

Victory made him the first undisputed lightweight champion since Pernell Whitaker in 1992 and the first in the four-belt era, which began in 2004.

Kambosos was undone by Haney’s sensational speed, instinct and relentless left jab that frustrated the Australian who struggled to land enough big blows.

It was a defensive masterclass by the American, whose slick skills and tactical nous won the day in front of a 41 000-strong pro-Kambosos crowd at an electric Marvel Stadium.

“This is a dream come true,” said Haney, who got a big boost on the eve of the fight when his father and lead trainer Bill was granted an 11th-hour visa after initially being denied entry to Australia over a three-decades-old drugs conviction.

“I knew this was a big moment, it would have hurt me to win this without my dad so I’m glad he was here in my corner.

“I was comfortable,” added the 23-year-old. “I was sticking to the game plan to hit and not get hit. I fought a smart fight. I handicapped him of his best things.”

Victory in the 135-pound limit fight stretched his phenomenal record to 28-0 with 15 KOs while Kambosos, 28, suffered his first professional defeat in 21 bouts since making his professional debut in 2013.

The win elevates Haney to an exclusive club of fighters.

He is only the eighth boxer to hold all four belts from the major sanctioning bodies – WBC, WBA, IBF and WBO –- at the same time.

There was a rematch clause in the fight contract and Haney vowed: “I will be back”.

Kambosos, who stunned Teofimo Lopez at Madison Square Garden in November to claim the WBA, IBF and WBO titles, was originally in talks to fight Vasiliy Lomachenko in his first title defence.

But the plans fell through when the Ukrainian opted to stay in his homeland after Russia invaded which opened the door to Haney.

“I have to change a few things and I will get him back later this year,” said Kambosos.

“I landed a few shots, but he had a smart game plan and did what he had to do to win. He got the decision and respect to him.”

Haney’s dangerous left jab troubled Kambosos from round one as they sized each other up.

Kambosos landed a huge right in the second round, similar to the one that dropped Lopez, but Haney looked unbothered and continued jabbing to good effect.

Looking for a way inside, Kambosos was in constant motion but couldn’t produce any telling blows.

He finally found the target with a vicious left hook to the head at the death in round four, but Haney kept jabbing with Kambosos’s face showing wear with his left eye swollen and red.

With the crowd roaring Kambosos on, the fight sprung to life in round nine with both men swinging, but it was a desperate final act by the Australian who knew he was facing defeat.

On a stacked undercard, Australian Jason Moloney knocked-out Filipino Aston Palicte in round three with a to claim the vacant WBO international bantamweight crown.