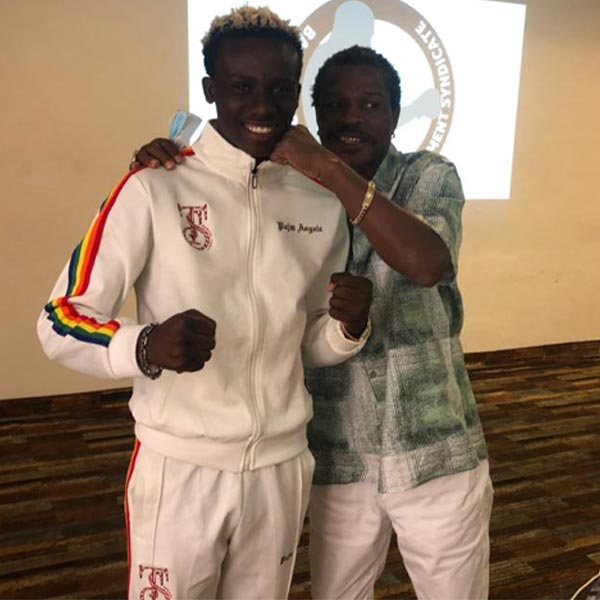 Takyi is getting ready to make his professional debut with new trainer, the great Ike 'Bazooka' Quartey in Accra on April 15

Olympic bronze medalist, Samuel Takyi, has signed an undertaking to pay two per cent out of his purse from out-of-Ghana bouts to the Ghana Boxing Authority (GBA).

The super featherweight contender finally reached an agreement with the Ghana Boxing Authority (GBA) to enable him to honour a June 11 bout in South Africa.

The 21-year-old boxer’s scheduled super featherweight contest against Mandlenkosi Sibuso (4-1, 1 KO) is now expected to go ahead at the Emperors Palace in Johannesburg on a Golden Gloves Limited card.

“I can confirm to you that we have solved our issues amicably,” said Abraham Kotei Neequaye, president of the GBA.

“Samuel Takyi and his manager came to the secretariat to sign the undertaking and I issued them a release letter for the fight,” he revealed.

The sudden U-turn by Bazooka Management and Promotions, handlers of Takyi, came as a big surprise after the syndicate’s owner, Ike Quartey, had threatened a legal action against the GBA for denying his boxer the right to work and earn a living.

Takyi’s bout with the South African came under threat after the GBA refused to issue the Ghanaian, a release letter to facilitate his visa application.

That followed the boxer’s refusal to sign a permanent undertaking to compel him to pay two to five per cent of his purse from any out-of-Ghana bout throughout his career.

A clause in the GBA Statutes states that a boxer licensed by the GBA shall not be allowed to travel outside the country to engage in any professional boxing unless he has obtained a release letter from the authority.

The rule further indicated that boxers licensed by the GBA who fight under the flag of Ghana or not are expected to remit a percentage sum to the authority, such percentage amount will be determined from time to time by the GBA.

However, there is no clause in the statutes which compels boxers to sign an undertaking before being issued release letters for fights abroad.

In a recent chat with the Graphic Sports, Mr Neequaye explained the need to compel boxers to sign an undertaking before being released to fight outside Ghana due to past experiences where fighters refused to pay their dues after fighting abroad.

Attempts to contact Takyi and members of the Bazooka Management and Promotions for their reaction proved futile.