Adebayor had a huge influence on my career- Joseph Attamah Larweh 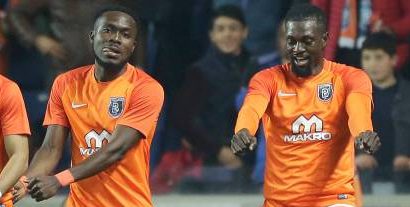 Ghana defender, Joseph Larweh Attamah says former teammate Emmanuel Adebayor had a good influence on his career whilst playing for Turkish side Basaksehir.

The 28-year-old played three seasons for Basaksehir before leaving the club to join Rizespor in the 2019/20 season.

The Black Stars defender revealed Adebayor had a huge influence on his career whilst playing with the former Arsenal and Manchester City forward.

Sharing his time with Adebayor at the Turkish club, he said, “Adebayor pushed me to the limit. He made an impact in my career. When he joined the team he pushed me to my limit, like after training we have to stay and work at the pitch or the gym.

“On the pitch he talks and advises me. What really helped me is Clichy had joined the team and the two of them trained together. So I always joined them after the training sessions. I really learned a lot from them. We speak always.

“Adebayor always trains and I don’t believe in that assertion that big players turn to lead young players astray”.

The former Tema Youth player currently plays for Kayserispor in the Turkish League.

He made 30 appearances and scored two goals in thejust-endedd season.