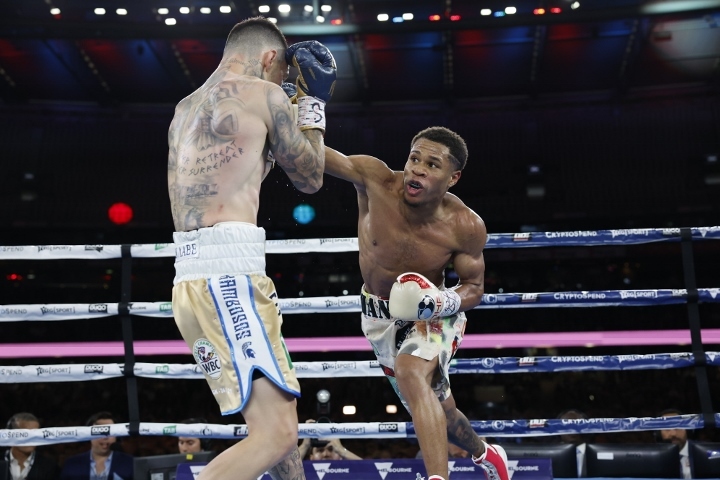 Nielsen Media Research revealed Tuesday that their 12-round main event attracted an average audience of 1,322,000 and a peak audience of 1,351,000. Haney, who won a unanimous decision, and Kambosos boxed on Sunday afternoon at Marvel Stadium in Melbourne, Australia, but their bout aired live Saturday night in the United States.

Nielsen’s numbers include only viewers who watched Haney-Kambosos on ESPN’s English-language linear channel, not those who saw it on ESPN Deportes or ESPN+, the network’s streaming service. Viewership of Haney-Kambosos was lower but comparable to the audience that watched the Shakur Stevenson-Oscar Valdez junior lightweight championship match April 30 on ESPN.

Haney retained his WBC 135-pound championship and won the IBF, WBA and WBO belts from Kambosos.

Neither Haney nor Kambosos had headlined a boxing telecast on ESPN before Saturday night.

Haney’s six previous fights were streamed by DAZN, which isn’t monitored by Nielsen and doesn’t release its own viewership totals. Kambosos’ upset of Teofimo Lopez (16-1, 12 KOs) in their lightweight title fight also was streamed by DAZN on November 27 from Madison Square Garden’s Hulu Theater in New York.

ESPN’s telecast of Haney-Kambosos began during the 11th round of the main event Showtime televised live Saturday night, Stephen Fulton’s terrific performance in a 12-round, unanimous-decision victory over Daniel Roman. The start of Haney-Kambosos impacted Showtime’s viewership of the final two rounds of Fulton-Roman, according to Nielsen.

In all, the 122-pound championship bout between Philadelphia’s Fulton (21-0, 8 KOs), the WBC and WBO champ, and Los Angeles’ Roman (29-4-1, 10 KOs), a former IBF and WBA champ, drew an average of 199,000 viewers. Fulton-Roman, which headlined a Premier Boxing Champions card at The Armory in Minneapolis, attracted a peak audience of 251,000 in its early rounds.