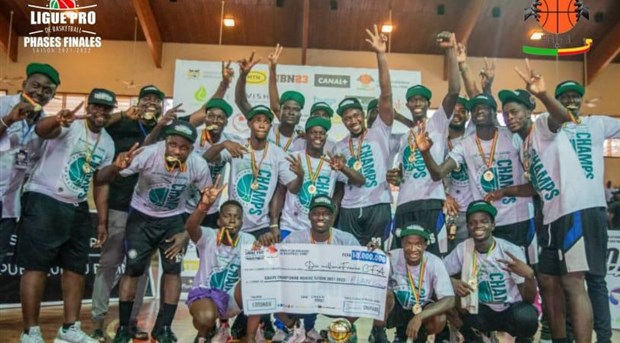 The atmosphere in the historic town of Ouidah over the weekend was simply electric and players, coaches and administrators were in a frenzy for the final of the 2021-2022 Benin Professional League season.

Romaric Quenum, captain of Elan Coton describes it as a new dawn for Benin basketball.

The 2.00m (6ft 7in) forward had a man-of-the-man performance in the 64-59 win over ASPAL BBC that crowned Etan Coton as the new champions.

The final took place at the gymnasium of the Regional Institute of Public Health (IRSP) in Ouidah.

Talking to FIBA.basketball, Quenum noted that he and other players are already looking forward to the next season.

Quenum told FIBA.basketball after the encounter that the 2021-2022 season has proven to be just what basketball needs in the West African nation.

“The success of the Benin Professional League has taken basketball to a new height. The Benin government’s insistency on clubs transforming into companies has brought great improvement. Now, players no longer have to struggle with different jobs to earn a living because the pay is good with indications of getting even better.”

According to Romaric, who has featured in the Nigeria Premier Basketball League with Dodan Warriors, the Benin Professional Basketball League is introducing more foreign players into the league with room for all five to be on the court at the same time.

“Bringing in more foreign players will further boost the league and make players from here work harder thereby improving nationally. It is my firm belief that what the Benin Basketball Federation leadership has brought deserves commendation.”

ASPAL BBC from the northern part of Benin Republic got to their second final in a row but the new owner of the team, Taofick Ahmed says he is unperturbed and hopeful of better times ahead.

“I must commend the leadership of Ismahinl Onifade for the great changes he and his management team have brought to basketball. What I love most about all of this is the role of the Benin government in providing an enabling environment.”

With more foreign players billed to come into the league, players will earn more and see the national teams of Benin grow from what it is now, he offered.

“My duty here is to help give the desired competition and contribute to the general development of Beninese players so that when the kids that are in America, Italy, France and other parts of Europe join, they would be able to compete effectively.”

The excited President of Benin Basketball Federation, Ismahinl Onifade is of the view that the second edition of the Benin Professional Basketball League will only get better.