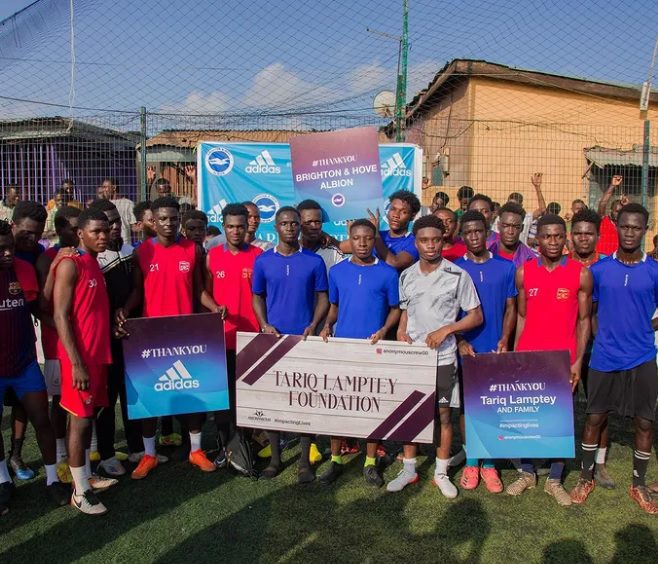 Tariq Lamptey, a right-back for Premier League’s Brighton & Hove Albion, is making the most of his vacation in Ghana. While playing football with the locals, Lamptey made some donations through his organization, the Tariq Lamptey Foundation.

The youngster, who has represented England’s youth teams, is also said to have made up his mind to represent Ghana at international level.

Tariq Lamptey, a Ghanaian defender born in England and a Chelsea youth product was spotted at the Cape Coast Stadium when the Black Stars routed Madagascar on match day one of the 2023 AFCON qualifiers. Lamptey, who has been contemplating a shift to Ghana for international call-ups for a while, recently declined a call-up to the England U21 team while he considers his options.

Other sources say that a defender for Brighton & Hove Albion has reportedly already completed formalities of his nationality transition and will make his Ghana debut before the 2022 FIFA World Cup in Qatar. Lamptey had requested to England U-21 coach Lee Carsley to be left out of the squad for the European U-21 Championship qualifying games as he considers his future in the national team.

The right-back is expected be named in coach Otto Addo’s next side for the double-header against Angola in September in the 2023 AFCON qualifiers following the encouraging talks the Ghana Football Association (GFA) have held with the player and his family. The governing body of Ghanaian football is pursuing a slew of Ghanaians born in the diaspora to bolster the national team ahead of the 2022 FIFA World Cup.

Bobby Zamora, a former striker of Brighton & Hove Albion has advised Tariq Lamptey about the consequences of switching allegiances so early in his international career. Zamora has confessed that he had the choice of playing for Trinidad and Tobago during his playing days, but he chose to play for England instead, which he describes as one of the best experiences of his life.

Lamptey, Arsenal’s Eddie Nketiah, and Chelsea’s Callum Hudson-Odoi, according to Zamora, should think twice about leaving the ‘Three Lions’. And the forward, who has also performed for the ‘Spurs’ and later for QPR and Fulham, reckons that all three players are capable of representing England in the future on a very high level.

He described the guys named as so close and so young. Zamora believes it is too early for them to leave, stating that all of those players have the ability to make a real difference and have a significant effect on England.

Will Lamptey Be a Starter in the Ghana National Team?

The 21-year-old is without a doubt a quality full-back, having established himself as one of the greatest right-backs in the English Premier League over the past two seasons. Despite the buzz surrounding him, he will not be able to saunter into the Black Stars’ right-back position without having to fight for it.

Currently, Dennis Odoi is the team’s first choice for the position. With only three games under his belt, he has taken control of the position. The 31-year-old made his Ghana debut in the World Cup playoff against Nigeria. He is a big part of why Ghana got the qualification.