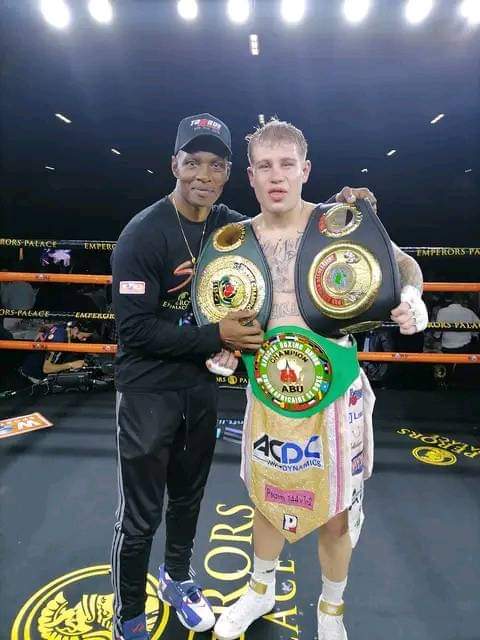 In an epic toe-to-toe encounter, Roarke Knapp beat Brandon Thysse on a 12-round split decision, in a rematch at Emperors Palace, near Kempton Park, on Saturday night, to win the vacant African Boxing Union junior middleweight title.

On same night, 21 year old Ghanaian prodigy, Samuel ‘Ring Warrior’ Tagoe made mince of his opponent, dominating, flooring Mandlenkosi Sibuso in both rounds before stopping the South African in front of his own people in round 2.

Knapp (14-1-1; 11), who was stopped in the seventh round to suffer his only defeat against Thysse (14-3-1; 12) in their first fight was much sharper as he weathered an early storm in the opening round to punch out a deserved decision.

The slugfest continued through round two with Thysse (69.55kg) possibly shading it.

However, Knapp (69.80kg) came back well in rounds three and four, with both fighters throwing bombs.

In the fifth round the toe-to-toe action continued and Thysse landed a big uppercut just before the bell, that sent Knapp’s head jolting back.

Knapp all ecstatic after his split decision victory

With his faster hand speed Knapp continued to beat Thysse to the punch in rounds six and seven but the gutsy Thysse came back in the later rounds to close the gap, but this was not enough on two of the judge’s scorecards, as Knapp emerged a winner.

In a poor fight that never rose to any heights, a well-conditioned Chris Thompson (104.85kg) outscored Joshua Pretorius (106.45kg) over 12 one-sided rounds to win the South African and African Boxing Union heavyweight titles.

Pretorius, who was making the first defence of his title, never got into the fight and past the southpaw jab of Thompson.

The shorter Pretorius only threw a few tentative punches throughout the 12 rounds and did not know how to handle a southpaw.