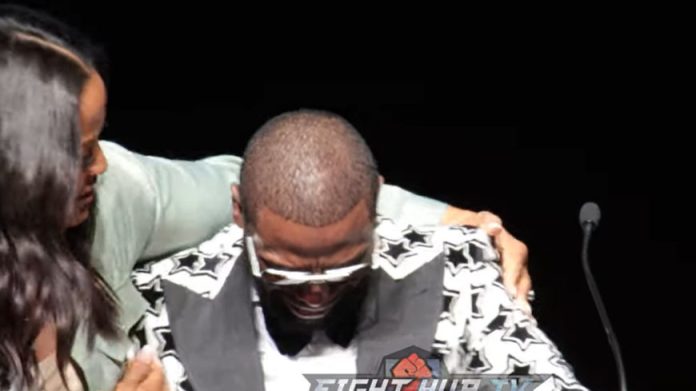 Floyd Mayweather vowed he wouldn’t get overly emotional, but the moment got the better of him.

The greatest fighter of his generation was among a three-class group of stars inducted into the International Boxing Hall of Fame on Sunday afternoon in Verona, New York, which, like so many others before him, brought him to tears.

He cried for two full minutes at the induction ceremony at Turning Stone Resort and Casino, where Roy Jones Jr., Bernard Hopkins, Shane Mosley, Andre Ward and others joined him.

“I don’t really know what to say,” he finally uttered, as seen in the FightHub TV video above. “I told myself I wouldn’t cry, but this is something beautiful. This is one of the best days of my life.”

Mayweather finished his career with a perfect record of 50-0 (27 KOs) and as the richest boxer ever, with reported career earnings of more than $800 million. No one in the sport could touch him in the ring or in the wallet.

He made sure to acknowledge the man most responsible for his success, father/trainer Floyd Mayweather Sr., who introduced him to boxing when he was a child. His late uncle, Roger Mayweather, also served as his trainer.

“I love my dad because without him, this wouldn’t be possible,” Mayweather said. “He’s the best trainer ever. There will never be another trainer that’s better than my dad.”

Mayweather added that he was grateful for wise advice his father gave him early in his career: Don’t take unnecessary punishment.

“I said, ‘You know what? I’m going to take less punishment,’” the younger Mayweather said. “I want to retire on my own terms, and I want to make smart investments so I’m able to live a comfortable life once my career is over.”

Three classes were inducted on Sunday because two induction weekends were canceled, the result of the coronavirus pandemic.

Klitschko wasn’t able to attend to the event because of the war in his home country of Ukraine.