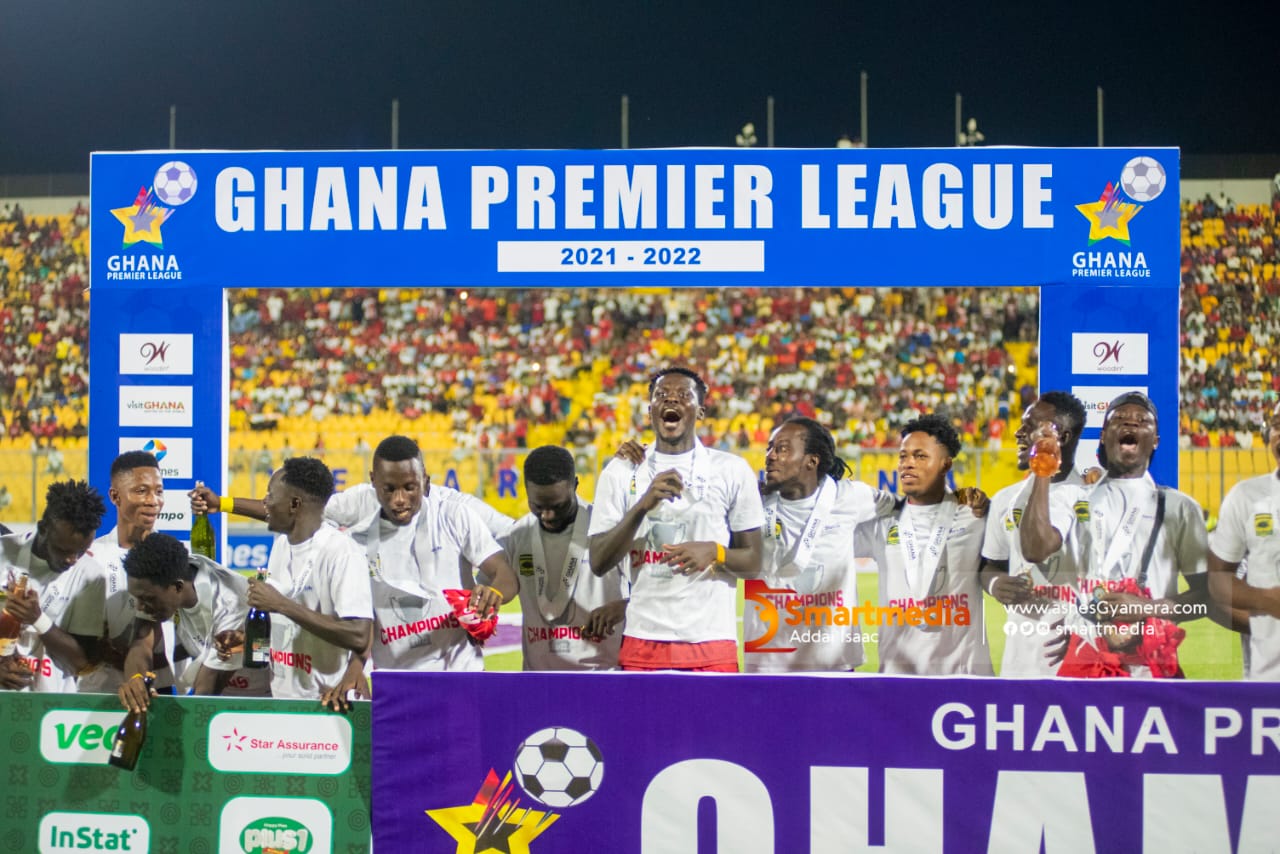 I watched quite a large number of Asante Kotoko’s league matches this season and I am convinced they deserve to be champions.

It was easily noticeable that coach Prosper Ogum had his stamp on the team. Pattern of play was fluent with beautiful passing and attacking flair. Even though the defence could not be described as that really solid, goalkeeping was quite satisfactory as well as the midfield.
The attacking machine spearheaded by Cameroonians Mfegue and Etouga Mbella ably supported by Brazilian artist, Fabio Gama was deadly in the box. No wonder they fetched an average of two goals per match in 33 outings so far.

The club has been able to assemble quite a promising team for the future and I suggest they should find the money and invest in at least three or four experienced utility players to strengthen the squad for Africa.

Nobody should entertain the childish notion that the current squad have toiled to win the league and must therefore be rewarded for Africa Cup participation.
This is the kind of talk on social media about the Black Stars squad for the Qatar World Cup.

Certain football fanatics think the Qatar World Cup is for sight-seeing. They argue there is no need to beef up the team with players who, no matter circumstances did not feature in the qualifying series. Some of the puerile reasons are that those players were not keen to play in the qualifiers. They are opportunists only trying to gain fame by playing in the World Cup.

This to my mind is unfounded and it is noteworthy that the Black Stars handlers are treating this with the contempt it deserves. Let’s get it straight that the World Cup in not a tea party, all efforts should therefore be made to assemble the best materials to raise the national flag.

The same advice should go to the management of Kotoko. I emphasise my suggestion the team should be strengthened and I am sure the coach knows too well the weak points to be tackled.

It is admirable the determination of CEO Nana Yaw Amponsah to get some physical structures for the club, specifically a club stadium. I beg to differ a bit.

My suggestion is that at the moment more emphasis should be put on players’ welfare. If possible salaries could be doubled. I believe if the present moral in camp is sustained with attractive incentives to motivate the players, they will put up their best. This will attract fans to fill the stands. The fabulous team could eventually return to the glorious days of the early 80s.

Yes oo, those were the days when Kotoko fans could fill the Baba Yara Stadium to the maximum even overflowing to the floodlight panels.

Those were the days of Opoku Afriyie, Papa Arko, Opoku Nti, Robert Bannerman, Ebo Mends, Yayha Kassum, Joe Carr, Kyenkyenhene, Karimu Zito and co who played with such passion yielding such amazing results that made Kotoko fans feel on top of the world.

And Yaw Bawuah with a team of dedicated football addicts like Assad Mallah, Charles Gyimah, Antwi Gyamfi, Agyeman Berko, Yaw Larson, Captain Pattington and co running the club with such efficiency that they were accused by some people who perhaps had no sense of humour as “monopolising the beloved fabulous club.”

And in the current dispensation of professionalism I recall with nostalgia the great efforts of stalwart philanthropists like B.K. Edusei and S.K. Mainoo who spent a lot of their time and resources to make Kotoko one the best teams in Africa.

B. K. Edusei especially was one person who indirectly introduced professionalism into our football. Operating from his Ringway Estate mansion in Accra, he single-handedly recruited top players from other clubs to Kotoko with huge monetary incentives and cars. The team naturally became impregnable and by the time other clubs saw the light, Kotoko were Africa champs as early as 1971.

Those were the days of Robert Mensah, Oliver Acquah, Malik Jabir, Abukari, Sunday Ibrahim and co.

It’s a shame that BK and SK are not alive to be part of our modern day professional regime. I am sure they would have used their immense business acumen to lead the crusade to make Kotoko a true professional venture.

There is no doubt that the Porcupine Warriors are pace setters in Ghana football being the first to employ a full time expatriate coach (Joseph Ember) in the 60s.

I am not a student of economics but with the array of talented financial gurus in the Kotoko family, led by Kojo Addae Mensah, who needs no introduction, I trust Kotoko can make it big as a viable football industry.

The gap between Kotoko’s old classmates from Egypt and Congo Kinshasa is widening at an alarming rate and it is time to stop the rot.

On the local scene, Kotoko had been runaway league champions 18 times as at 2003 with close rivals Accra Hearts 11 cups.

This huge gap was astonishingly closed from 1996-97 season when Hearts won an unprecedented six trophies back to back.
It is a proud record worth a place in the Guinness Book of records and which Kotoko fans are eager to emulate.

Some analysts believe the pair of coach Prosper Ogum and CEO Nana Yaw Amponsah with the proper support, can make Kotoko once more the team to beat not only in Ghana but Africa as a whole.

It’s exactly 40 years ago when Kotoko met Egyptian giants El Ahly in the first of their back to back Africa Cup finals at the Baba Yara Stadium. Ahly won the cup in the 1982 encounter but Kotoko snatched the cup the following year at the same venue.
Since then Ahly has won the cup again a number of times leaving Kotoko completely stranded.

Kotoko’s spiritual owner, Otumfuo, the Asantehene has not hidden his wish to see Kotoko triumph again in Africa. This is the challenge facing Nana Yaw and Ogum. All hands must therefore be on deck to ensure the presence of the Porcupine is felt in Africa.

Incidentally Kotoko’s participation will coincide with Ghana’s hosting of the Africa Games and this should be an added incentive to make the occasion even grander.