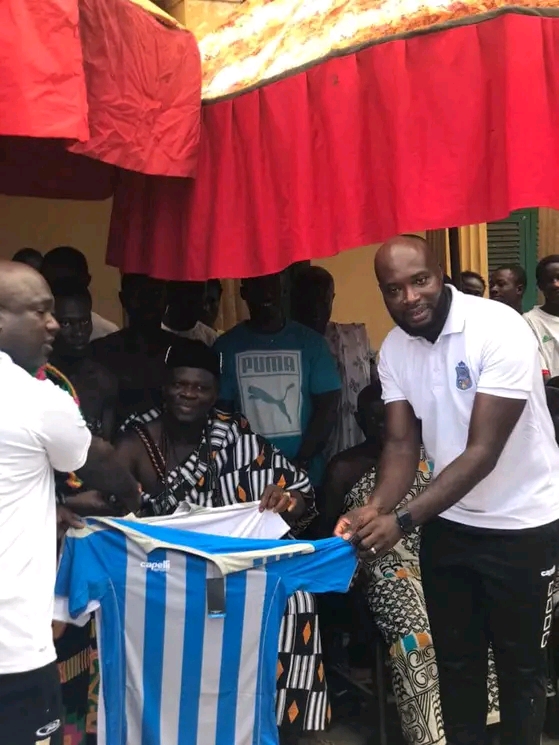 Newly promoted Ghana Premier League side, Kotoku Royals based in Akyem Oda in the Eastern Region have paid a courtesy call on the chief of area, Oseadiayo Dr. Frimpong Manso IV, who doubles as the Paramount Chief of the Akyem Kotoku Traditional Council.

Kotoku Royals F.C. (previously known as Kotoku Royals Academy), founded in 2003 have metamophorsed through the various tiers of Ghana football before gaining promotion to the elite division, the Premier League after winning the 2021/22 Zone 3 of the Division One League.

The Management and players of Kotoku Royals went to officially announce their promotion which is historical to the traditional leader.

Oseadiayo Dr. Frimpong Manso IV, speaking to the team, expressed his heartfelt gratitude to the players for lifting the name of Akyem Kotoku and Eastern Region as a whole very high.

Oseadiayo Dr Frimpong Manso IV noted that the spirit of Akyem Kotoku is always with the team so he admonished the players to always remember that and believe that they are never alone.

He said Kotoku Royals FC’s qualification to the Premier League will bring more economic benefits to the people direct and indirectly and encouraged them to work hard so that they can stay in the top flight league forever.

He pleaded with the people in the Eastern Region to support the team financially and spiritually so that they can survive in the top league.

The Chairman of Kotoku Royals FC, Linford Boadu Asamoah who doubles as the Eastern Regional Football Association Chairman, speaking on behalf of the team, reiterated and thanked the chief and his elders for how supportive they have been to the team. He plead with them to continue supporting the team so that they can maintain their Ghana Premier League status forever.

Kotoku Royals were promoted from Division One Zone 3 to the Premier League ahead of Liberty Professionals after a goalless draw away to Tema Youth on the final match day last Sunday.