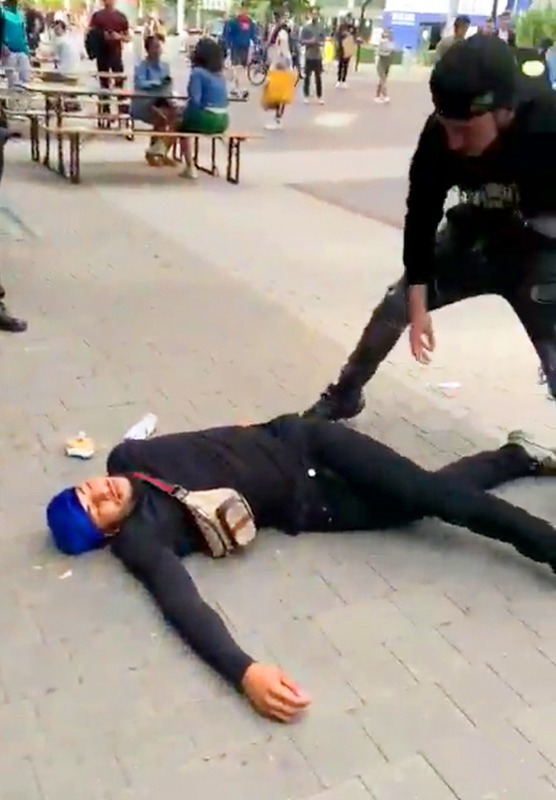 An unknowing punter acted aggressively towards the wrong bouncer this week and found himself floored by former heavyweight champion Julius Francis.

The 57-year-old Londoner, who once shared the ring with Mike Tyson, is the subject of a clip that has gone viral on social media in which he showed he still possesses a very dangerous right hand.

In the video, an altercation is being filmed outside BOXPARK Wembley – where the retired ex boxer now works as part of the security team.

Francis is initially not keen to get involved as other members of his security team work to keep the arguing men apart and escort them out of the venue.

However, one of the men is particularly aggressive and swings at another, prompting Francis to take a more active role.

Disrespectful words continue to be exchanged during this period as their argument becomes seriously heated.

Then, as Francis continues trying to peacefully escort the more aggressive punter out, the man walks towards him and raises his hand – seemingly to point in his face.

Francis responds with a lightning fast right hook which lays him out cold.

However, the Metropolitan Police say they will not be pursuing the matter.

A Met statement read: “We are aware of footage circulating on social media showing an incident involving security staff and a member of the public outside Boxpark in Wembley.

“The incident took place shortly after 17.00hrs on Saturday 11 June. Officers were called and attended the venue.

“A group had been ejected and one male customer had become involved in a confrontation with security staff.

“Officers have spoken to all parties involved and have reviewed relevant CCTV. No further action will be taken in relation to the incident involving the security guard and male customer.”

This will come as a relief to the founder of BOXPARK Robert Wade, who defended Francis in a statement on Linkedin where he was keen to point out the sort of man he is.

It is of course no surprise that Francis is capable of looking after himself, even at the age of 57.

Back in the late 1990s, he was the British and Commonwealth heavyweight champion.

His two most famous fights were both defeats though.

First, in 1998, Francis faced a young Vitali Klitschko and was stopped in two rounds.

Klitschko then went on to become world heavyweight king.

Then, in 2000, Francis was utilised an an opponent for an older Mike Tyson on his UK tour.

“I only remember the first knockdown,” recalled Francis to talkSPORT.com about fighting ‘The Baddest man on the Planet’ during an event to commemorate the bout’s 20th anniversary back in 2020.

From the bell, Tyson let loose with some strong punches and Francis explained the American’s intelligence as a boxer meant he was drawn in and ultimately didn’t box his fight and utilise his jab.

A life spent fighting meant he wasn’t ready to take a step back.

“If I had boxed and run around the ring I do not think I would have got any respect from him.”

Francis was full of praise for Tyson’s head and foot movement, which made trying to return his punches extremely difficult.

The fight was then stopped during the second round.

“I’ve got no regrets,” Francis added.

“I’ve lived a relatively good life and been able to say I became a professional boxer and fought one of the baddest guys who ever boxed.

“It opened the door to me to for so many different things and not just commercially.

“I try to inspire young kids, whom I work a lot with. I tell them, ‘If I can do it, you certainly can do it.’”