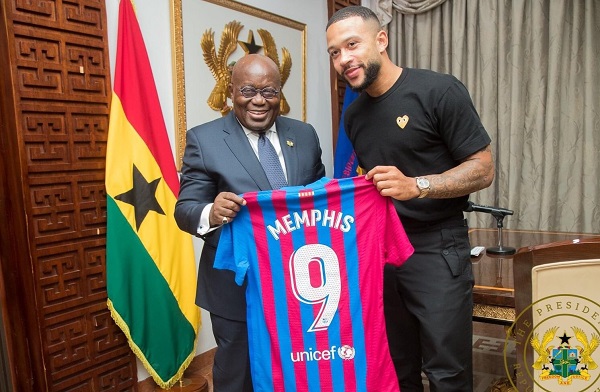 President Nana Addo Dankwa Akufo-Addo says that it has now become part of Ghana’s national policy to open the country up to all the people in the diaspora.

He said it was an important decision and that the synergy that could be created between people in the diaspora and those in the country, and for that matter Africa, was something that could benefit black people all over the world.

President Akufo-Addo said this when a Dutch international star of Ghanaian descent, Memphis Depay, paid a courtesy call on him at the Jubilee House in Accra on Thursday.

The President said government was doing everything possible to engage with all Ghanaians people from all over the world, including those who relocated a long time ago as a result of unpleasant events. When that was done, he said, the African continent and black people all over the world will be strong.

“Once Africa is strong, black people all over the world will be strong. I think it is important we collaborate and work together and see what we can do to make it happen,” President Akufo-Addo said.

Depay, 28, said he intended to hold street football games while in Ghana, among other initiatives, aimed at empowering less privileged kids and giving them hope and education.

“I feel like coming home and we appreciate what you doing for the country. I come in here to empower the kids that does not seem to have a chance, think God brought me to be there for them because they also have talents.”

He later gave President Akufo-Addo his replica Barcelona jersey to commemorate his visit.

The football star, who was born in the Netherlands to a Dutch mother and a Ghanaian father, was accompanied to the Jubilee House by some members of his family, Dutch football legend, Edgar Davids and Quincy Promise, another Dutch footballer who are all in the country to carry out some charity works in less privileged communities.