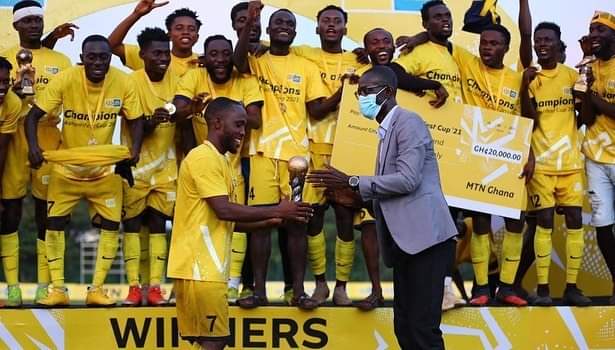 The now annual MTN Ashantifest Community Soccer tournament returns this week with 12 sides billed to vie for lucrative prizes aside the glory, honour and bragging rights at stake in the competition taking place alongside the yearly traditional festival of the Ashanti people as well as the 2022 MTN FA final, the community football gala tournament’s grand finale serving as a curtain raiser to the cup decider between record winners, Hearts of Oak and Bechem United at the Baba Yara Stadium in Kumasi this Sunday, June 26.

The winners of each of the four preliminary groups will then be drawn to face each other in two semi final ties to be played next morning, Thursday 23 June at same Bantama State Girls.

The losing semi finalists will later in the afternoon of same day, settle the bronze medal spot in the third place match at the very same Bantama State Girls in Kumasi, setting the stage for the final match of the 2022 Ashantifest Cup, scheduled as curtain raiser to the 2021/22 MTN FA cup final, of course featuring Hearts against Bechem at the Baba Yara Stadium.

“The event is aimed at rewarding customers in the region for their loyalty and support to MTN over the years,” stated an MTN press release.

“This competition forms part of the Ashantifest 2022 activities and it is our way of rewarding and engaging with our valued customers within and around the Ashanti Region for their continuous support to the MTN brand,” the organisbers added.

Aside the resounding one thousand Ghana Cedis (Gh¢1,000) appearance fee and a set of jerseys to all 12 competing teams, the winners of the amateur competition are assured a cash prize of twenty Ghana Cedis (Gh¢20,000), a trophy, medals and massive MTN airtime.

Also cashing in will be the runners-up who will take home ten thousand Ghana Cedis (Gh¢10,000) cash prize and medals as well as MTN airtime.

3rd place and 4th spots are not left out, cashing out five thousand (Gh¢5,000) and two thousand (Gh¢2,000) Ghana Cedis respectively along with medals and MTN airtime.

In addition, MTN will also give out juicy awards to the tournament’s best player, goal king, best goalkeeper and fair play team.

“We are in a digital era and knowledge about using technology to enhance productivity and service delivery is critical. As a result, an SME fair sponsored by MTN Business will be organized to showcase a range of products and services as the easiest and fastest way for businesses to gain solutions,” affirmed an MTN statement.

“It would also seek to educate businesses on the use of modern tools and bring them at par with the changing business world around them.

“In addition to these we will hold a Media Editors forum, community forum, and courtesy calls on the Ashanti Regional Minister and the Mayor of Kumasi. Our staff volunteering program, Y’ello Care will also take place this June after some three years of break following the COVID outbreak.”