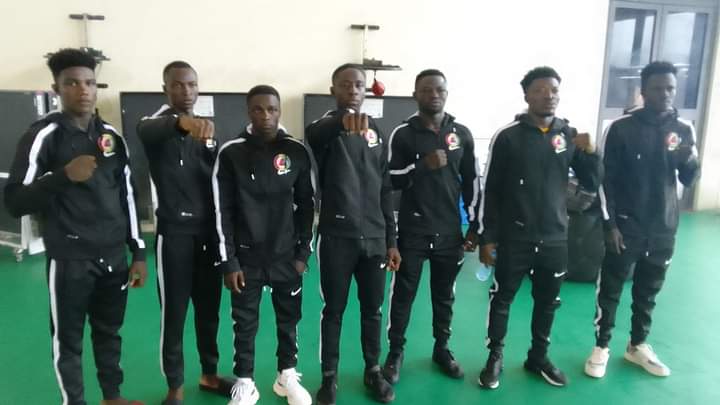 The national amateur amateur boxing team, Black Bombers, will present nine boxers for the Commonwealth Games which is scheduled for July 28 – August 8 in Birmingham.

Coach Kwasi Ofori Asare is expected to name eight male boxers and a female fighter for the competition which is aimed at fostering unity among Commonwealth nations.

As revealed by the Graphic Sports in its previous edition, the Ghana Boxing Federation (GBF), a body mandated for the development of boxing at the amateur ranks have presented the list of participants to the Ghana Olympic Committee (GOC) for the games.

The list which was chanced upon by the paper revealed known faces in the Bombers such as United States (US)-based Dr Ornella Sathoud, Olympian Shakul Samed (light heavyweight), Abdul Wahid Omar (light-welterweight) and Jessie Lartey (light-middleweight).

Ahead of the games next month, the Graphic Sports wants to profile the fighters that are expected to compete and win medals for the country in Birmingham.

The light heavyweight boxer was part of Ghana’s team that participated at the Olympic Games in Tokyo last July but failed to make any significant impact.

Shakul Samed failed to qualify from the preliminary stage of the Olympics. The 23-year-old light heavyweight fighter will be making his second appearance at the Commonwealth Games having participated at the Gold Coast Games in 2018.

Samed, who trains out of the Wisdom Boxing Gym in Accra, remains one of Team Ghana’s medal hopefuls after garnering experience in the games four years ago and competing at the Olympics.

Another medal hopeful, Omar will make his third attempt at the Commonwealth Games and holds a medal from the tournament in the 2014 edition in Glasgow, Scotland.

Abdul Wahid Omar won bronze in the flyweight division but failed to replicate that feat four years later when he took part in the 2018 edition in Australia.

Being the most experienced fighter in Ghana’s team for the Commonwealth Games, Omar, who trains at Accra’s Wisdom Boxing Gym, will be looking to stake a claim after his abysmal showing in the previous edition.

At age 28, the light welterweight boxer is in his prime and must deliver a medal for the nation after missing out on the Olympics in Tokyo.

Jessie Lartey, son of renowned boxing trainer, Lartekwei Lartey, was one of Team Ghana’s two medalists at the 2018 edition of the Commonwealth Games.

He won bronze in Australia and is being tipped to return from Birmingham with another medal.
The Fit Square Boxing Club fighter will hope to make himself and the entire nation proud when he enters the ring to compete next month.

Born to a Congolese father and a Ghanaian mother, Ornella Sathoud despite climbing the educational ladder with a PHD in Analytical Chemistry from the University of Delaware decided to follow her dreams of becoming a boxer.

Sathoud achieved that dream when she represented Ghana at the 2018 Commonwealth Games in Australia as Ghana’s sole female boxer.

The US-based boxer came close to qualifying for the Tokyo Olympics but missed out on a direct qualification when she lost 0-5 to Gramane Rady Adosinda of Mozambique in the middleweight division.

Sathoud will once again represent Ghana at the Commonwealth Games as the sole female boxer but with a lot of experience on her hands this time around.

Ghana’s Abubakar Quartey will have another opportunity at the Commonwealth Games after failing to make an impact in Australia in 2018.

Quartey, another Wisdom Boxing Club product has been with the Black Bombers for long but is yet to make a name for himself having missed out on the Tokyo Olympics.

Coming from one of Ghana’s finest gyms, Akotoku Academy’s Alfred Kotey is a surprise inclusion in the Commonwealth Games team after failing to take part in the Individual Championship that qualified boxers into the national team.

Kotey is making his debut appearance at the international stage and has a lot of expectations at the competition.

Joseph Commey is one of three debutants that will be representing Team Ghana at the games but is hopeful of making a significant impact for himself.

The Black Panthers boxer has been training well with the Black Bombers and has been given the chance to prove his worth at the international stage.

The talented bantamweight boxer has bid his time to reach where he is today after winning a national championship in 2018.

Abraham Mensah was overlooked in 2018 despite winning gold at the championship due to his age but has been given the nod in Birmingham.
The debutant is one of the team’s surest bets to win a medal and will hope to make the expectation a reality.

Yaw Addo will make his second appearance at the games after reaching the quarter finals of the last edition in Australia.

The flyweight boxer was preferred ahead of Theophilus Allotey who won gold at the Individual Championship last March.

Sources say the GBF opted for Addo following his rich experience at the international stage as compared to Allotey who would have made his debut.