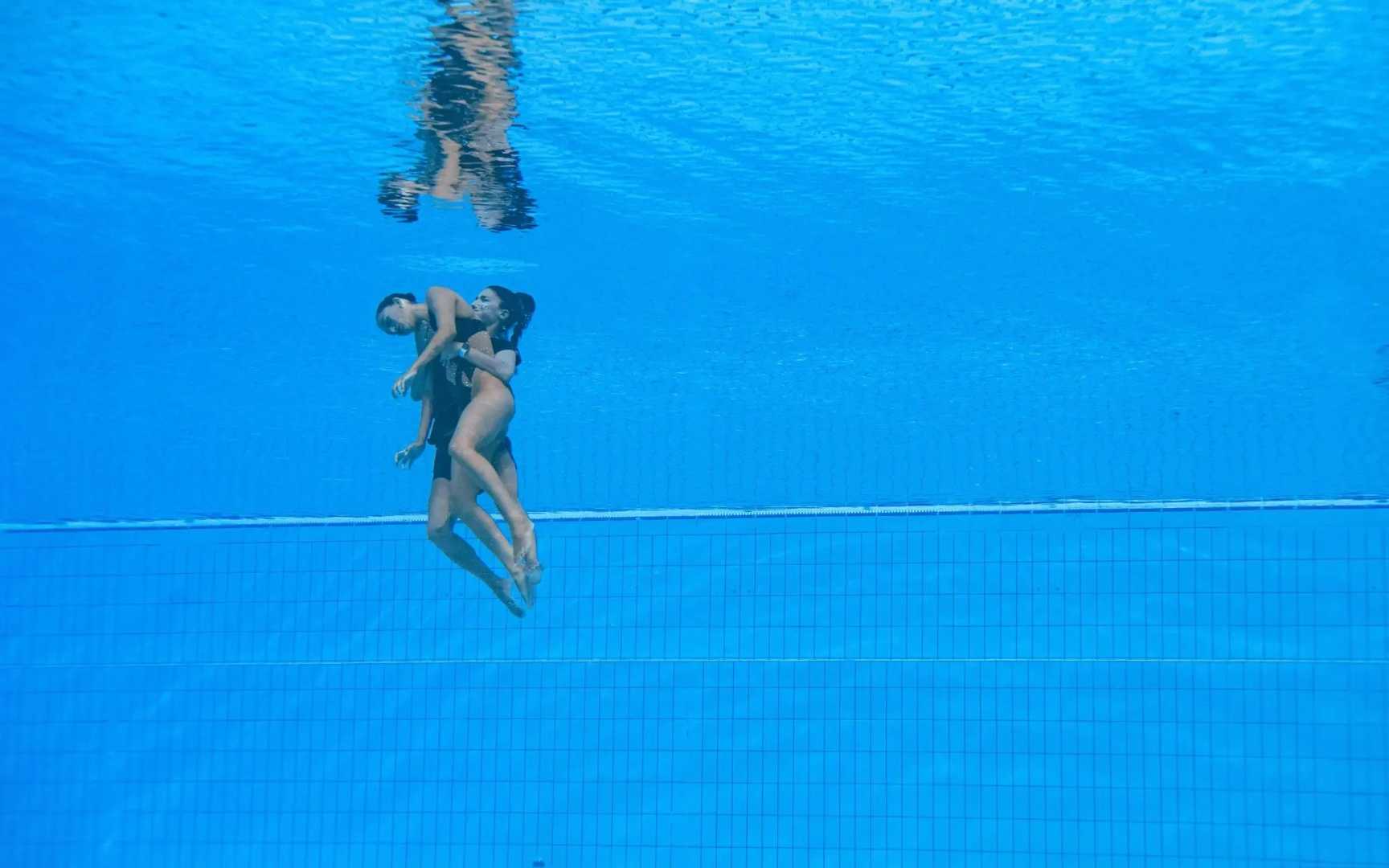 Words have almost failed me to express my emotion when I first saw the photos of USA’s artistic swimmer Anita Alvarez sinking underwater as her coach Andrea Fuentes (former Olympian) pulls her unconscious body up to surface, the kind of coach-athlete connection everybody dreams of. Coach Andrea quickly scanned the pool deck and made a split-second decision to dive into the pool, dressed in shorts and a T-shirt, she managed to pull Anita to be treated by medical staff after nearly 2 minutes of water filling her lungs today during FINA World Swimming Championship’s Artistic Solo free final held in Budapest, Hungry.

Alvarez, a 25-year-old Olympian from upstate New York, had lost consciousness at the end of her solo routine at the event, creating a potentially life-threatening situation as her motionless body drifted below the surface.  “Anita is Ok,” Fuentes said.

TREATED BY MEDICAL STAFF, VITALS ARE NORMAL Fuentes said Alvarez, who was treated by medical staff, had gone about two minutes without breathing as water filled her lungs. Doctors had “checked all vitals and everything is normal: heart rate, oxygen, sugar levels, blood pressure, etc… all is Ok,” Fuentes said in an update posted to the Instagram account of the USA Artistic Swimming, the sport’s American governing body.

COACH FUENTES TO THE RESCUE Anita’s coach, who is a four-time Olympic medalist, dived in and carried Anita to water surface, This was the second occasion Alvarez had fainted during strenuous training sessions for an Olympic qualifier in Barcelona, Spain, returning to the pool only hours after fainting to perform her next routine, but not in a competition.  last year when Fuentes again came to the rescue. Alvarez told WIVB-TV, a local television station in Buffalo, that she thought the demanding schedule and emotional toll of the events had caused her to faint.

PUSHING TO THE LIMIT IN A DEMANDING SPORT Fuentes added: “We sometimes forget that this happens in other high-endurance sports like marathons, cycling, cross country. We all have seen images, where some athletes don’t make it to the finish line and others, help them to get there. Our sport is no different than others, just in a pool, we push through limits and sometimes we find them. Anita feels good now and tomorrow she will rest all day and will decide with the doctor if she can swim free team finals or not.”

NO ONE WAS QUICK ENOUGH TO SAVE HER “I jumped into the water again because I saw that no one, no lifeguard, was jumping in,” Fuentes, a former Olympic medalist from Spain, told the Spanish newspaper Marca. “I got a little scared because she wasn’t breathing.” this validates the kind of attention and connection the experienced swimming coach has to her athletes saving Anita’s life not only once, but twice.