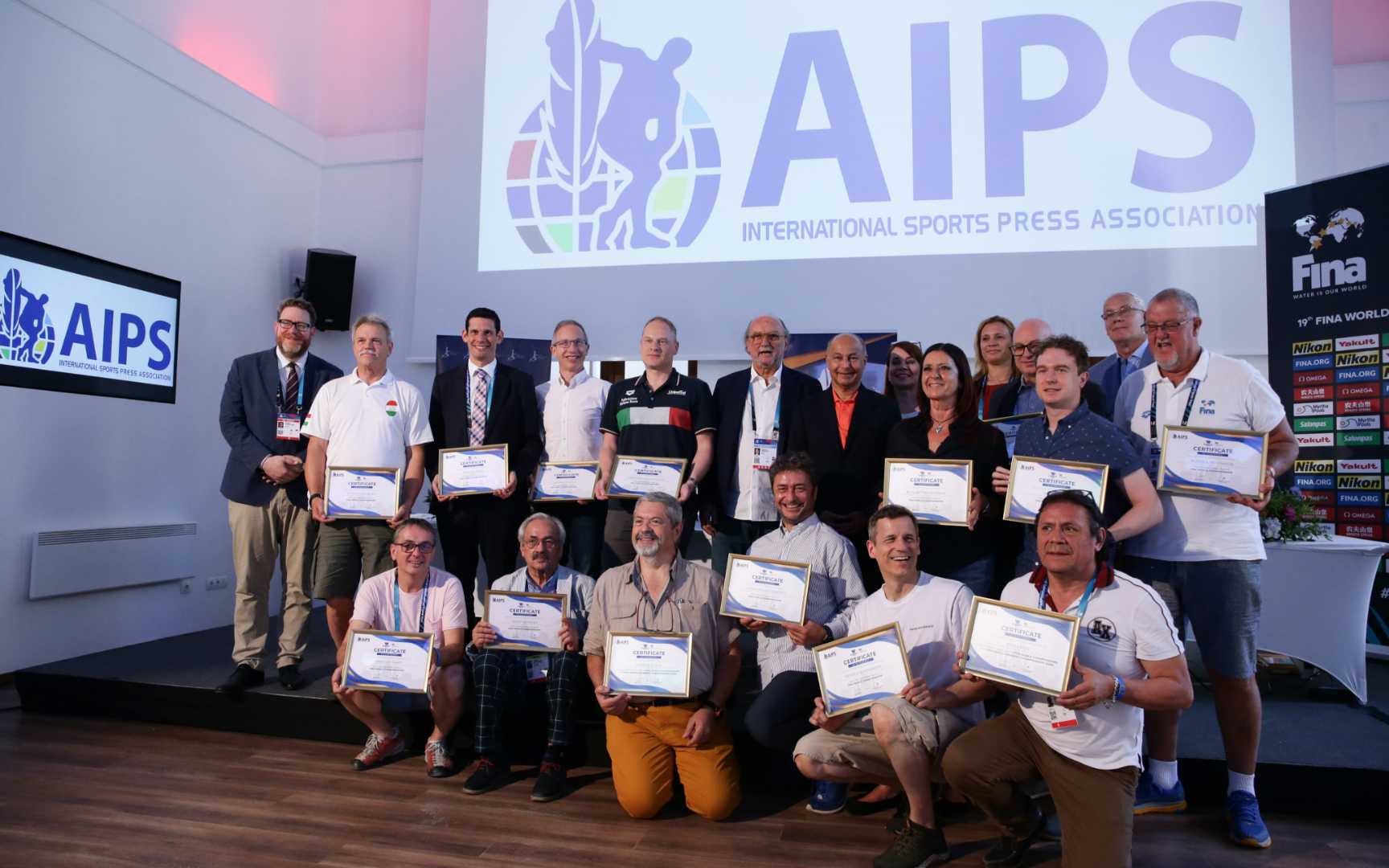 Today, AIPS in collaboration with the Hungarian Sport Journalists Association, on the sidelines of the 19th edition of the FINA World Championships in Budapest, celebrated the “Journalists on the Podium”, a unique event that recognises the values of our profession. On the occasion 16 journalists and photographers, who have covered 10 or more World Championships received a special recognition.

FINA President Husain Al-Musallam was present at the event together with Sándor Wladár, the president of the Hungarian Swimming Association and the chairman of the Local Organising Committee of the Budapest 2022 World Championships, Olympic champion Ágnes Kovács and György Szöllösi, president of HSJA. The ceremony was conducted by Zsuzsa Csisztu, AIPS EC member.

A CELEBRATION OF JOURNALISM

HSJA President György Szöllosi talked about the importance of the event, underlining the significance of the tradition behind it: “I would like to extend my thanks to AIPS President Gianni Merlo for the opportunity for Hungary to be a co-host of this fantastic tradition, a celebration of journalism, I would like to congratulate our colleagues who have covered more than 10 world championships.”

WHAT WE ACCOMPLISHED IS TRULY UNBELIEVABLE

FINA President Hussain Al-Musallam then took the stage, highlighting the efforts put behind the organisation of the championships: “I would like to thank AIPS for organising this event “Journalists on the Podium” and also I would like to thank the Hungarian Swimming Association and the LOC for organising in a very short time the FINA World Championships Budapest 2022 in just 4 months, at the beginning I could not believe that we would have World Championships here in Budapest, and even when I spoke with my colleagues in the FINA Bureau they were in doubt we would have such wonderful championships as we all experienced here, I am happy to be joining this honouring ceremony for the media, they are doing very well and they are very important to us.”

“I think in order for aquatic sports to be visible; media and athletes should be together in one team to stay present. And without the help of the media, it is really hard especially nowadays. Although online portals and social media gives freedom of access to everything, still without the media, it’s meaningless, your role is very important,” as stated Hungarian Olympic champion Agnes Kovacs.

Gianni Merlo explained to the colleagues all the initiatives that AIPS has created in the last two years and stressed the importance of our independence and commitment to helping the new generations of journalists grow in the right direction, in a world populated by the fake news. He pointed out that yesterday a group of Moroccan journalists were not allowed to enter Oran, in Algeria, to cover the Mediterranean Games. “The fight to defend our rights and our profession is getting every day more difficult, because the politicians want to put their hands in our profession,” he said.

THE LIST Below is the full list of journalists recognised during the “Journalists on the Podium” in Budapest, put in alphabetical order of country:

ABOUT JOURNALISTS ON THE PODIUM

“Journalists on the Podium” was born in August 2012, when Honav’s exact replica of the 2012 London Olympic torch was presented to more than 100 veteran journalists, each of whom had covered 10 Olympic Games or more.

Edwin Moses – winning gold medals in the race at the 1976 and 1984 Olympic Games – during the first edition of the event itself stated that “Many times we don’t think enough about how the story and the pictures and the news are passed on. It is great to be here to honor the journalists, many of whom have become friends with the athletes” underlining the importance of the ceremony.

In the years the international Sports Press Association, firmly believing in the significance of the recurrence, continued the tradition. In fact, after the editions in 2014 Sochi Winter Olympic Games, 2015 Toronto Pan American Games, 2016 Rio Summer Olympic Games, 2017 London World Athletics, 2018 Pyeongchang Winter Olympic Games, 2018 Glasgow European Championships, 2019 Giro d’ Italia and 2019 Africa Cup of Nations, Journalists on the Podium reached this year its 11th edition after three years of stop due to the pandemic situation.