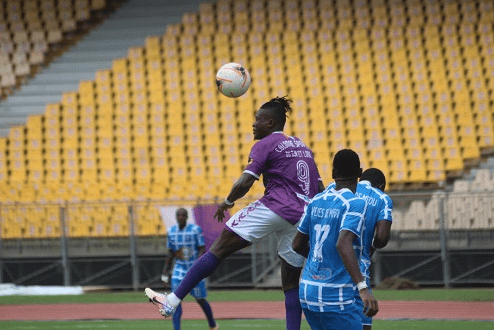 AS Fortuna du Mfou forward, Adolf Ekembe Enow, is not joining Asante Kotoko in the transfer window, according to the player’s agent Amadou Fontem Tigana.

On Friday, reports in Kumasi went rife the prolific striker is set to join the Porcupine Warriors following the exploits of compatriot Franck Mbella Etouga.

However, the representative of the player has denied such reports indicating the striker could be heading to North Africa or the gulf.

“This is fake news, I have never negotiated any contract with the club over Enow Ekembe. It’s not true,” he said.

Ekembe Enow has been in fine form in the Cameroonian topflight league and currently leads the goal king race.

The towering forward has netted 16 goals and provided nine assists in the league, earning him interests from clubs abroad.

His compatriot Frank Mbella Etouga lighted the Ghana Premier League with some blistering performances, helping Asante Kotoko win the league with his 21 goals.