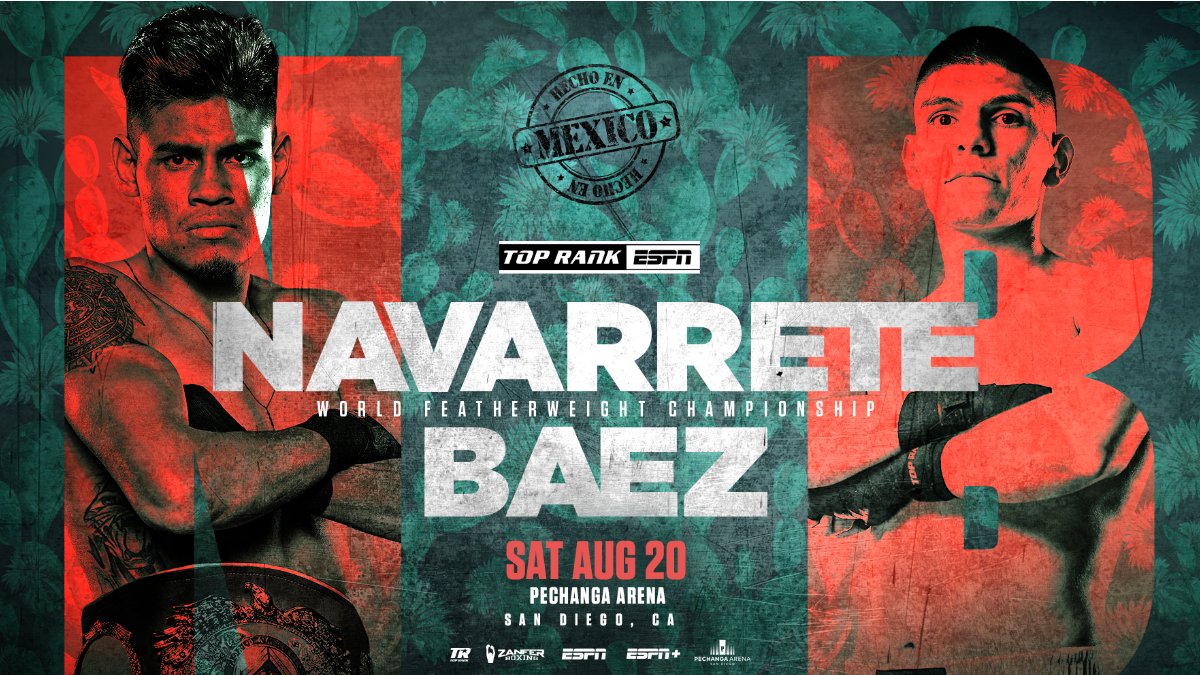 A fighting cowboy, a hometown hero, and the grandson of “The Greatest” are set for a summer night to remember in San Diego.

Mexican star Emanuel “Vaquero” Navarrete will defend his WBO featherweight world title in the main event against countryman Eduardo “El Gemelo” Baez on Saturday, Aug. 20 at Pechanga Arena San Diego. Navarrete also signed a new multi-year promotional agreement with Top Rank that will see him fight on the ESPN family of networks in events promoted in association with Zanfer Promotions.

In a four-round special feature, undefeated middleweight prospect Nico Ali Walsh, grandson of Muhammad Ali, will fight Reyes Sanchez in a rematch of their December 2021 bout that Ali Walsh edged by majority decision. Ali Walsh will fight in the historic venue that hosted one of his grandfather’s most memorable bouts. In March 1973, Ali and Ken Norton battled for 12 rounds at what was then known as San Diego Sports Arena. Ali suffered a broken jaw and lost a split decision in a major upset.

Ticket information for this event that will be promoted by Top Rank, in association with Zanfer Promotions, will be announced soon.

“San Diego is a great fight town, and this is an incredible card from top to bottom,” said Top Rank chairman Bob Arum. “Emanuel Navarrete is always in tremendous action fights, and Eduardo Baez is the type of opponent who will stand in the center of the ring. Santillan is a fantastic young man who drew plenty of support from the local fans last time he fought here. Nico Ali Walsh has improved leaps and bounds since turning pro last year, and I expect him to leave no doubt against Sanchez this time.”

Navarrete (35-1, 29 KOs), winner of 30 consecutive bouts, is a two-weight world champion entering his 10th world title bout. A native of San Juan Zitlaltepec, Mexico, he emerged on the world scene with a pair of title fight victories over Isaac Dogboe, which started his run as one of boxing’s most fan-friendly world champions. Following five junior featherweight title defenses in nine months, Navarrete moved up to featherweight and won the WBO title in October 2020 with a decision over Ruben Villa. He defended his title twice in 2021, including last October’s 12-round barnburner over Joet Gonzalez at Pechanga Arena.

“I am very excited to finally be back in the ring on August 20. The inactivity of these last eight months has served to give my body the rest it needed and to reflect on many things,” Navarrete said. “Now I’m coming back stronger physically and mentally. I’m going to show that I’m ready to fight any champion at 126 or 130 pounds. There will be a lot of ‘Vaquero’ for a long time.”

Santillan (29-0, 16 KOs) is a 10-year pro who has seen his career momentum take off since linking up with noted trainer Robert Garcia in 2020. Last October, he made his Pechanga Arena debut, bringing a raucous cheering section that watched him outfight Angel Ruiz over 10 action-packed rounds. He returned in April in Costa Mesa, California, and knocked out Jeovanis Barraza in seven rounds.

“I didn’t know when I’d be back fighting in San Diego, so when I heard the news, I was ecstatic. This shows we can continue having big cards in San Diego, and I can’t wait for all my fans to pack Pechanga Arena,” Santillan said. “I want a world title opportunity soon. That’s the dream. I’d love to fight for a world title, and defend my belt, in my hometown.”

Ali Walsh (5-0, 4 KOs) had no ring struggles until meeting Sanchez under the Madison Square Garden lights. After a dominant first two rounds, Sanchez rallied in the third and fourth to nearly pull even. In January, Ali Walsh got back on the knockout track with a second-round stoppage over Jeremiah Yeager. Three months later, on the Oscar Valdez-Shakur Stevenson undercard in Las Vegas, he sparked out Alejandro Ibarra in the opening round with a left-right combination. He enters the Sanchez fight with a new head trainer, Kay Koroma, who works with (among others) Stevenson, rising middleweight prospect Troy Isley, and female pound-for-pound star Mikaela Mayer. Sanchez (7-2, 3 KOs), from Topeka, Kansas, entered the first Ali Walsh fight with an unbeaten record built primarily in his home state. He is coming off a decision loss to unbeaten prospect Sharif Rahman, son of former heavyweight champion Hasim Rahman.

“Despite winning our last fight, I feel like I must set the record straight with Reyes Sanchez. He’s the only opponent I haven’t knocked out, and I don’t see the rematch going the distance,” Ali Walsh said. “Kay Koroma has already added so much to my arsenal, and I can’t wait to perform in front of the great San Diego fans and everyone watching on ESPN.”