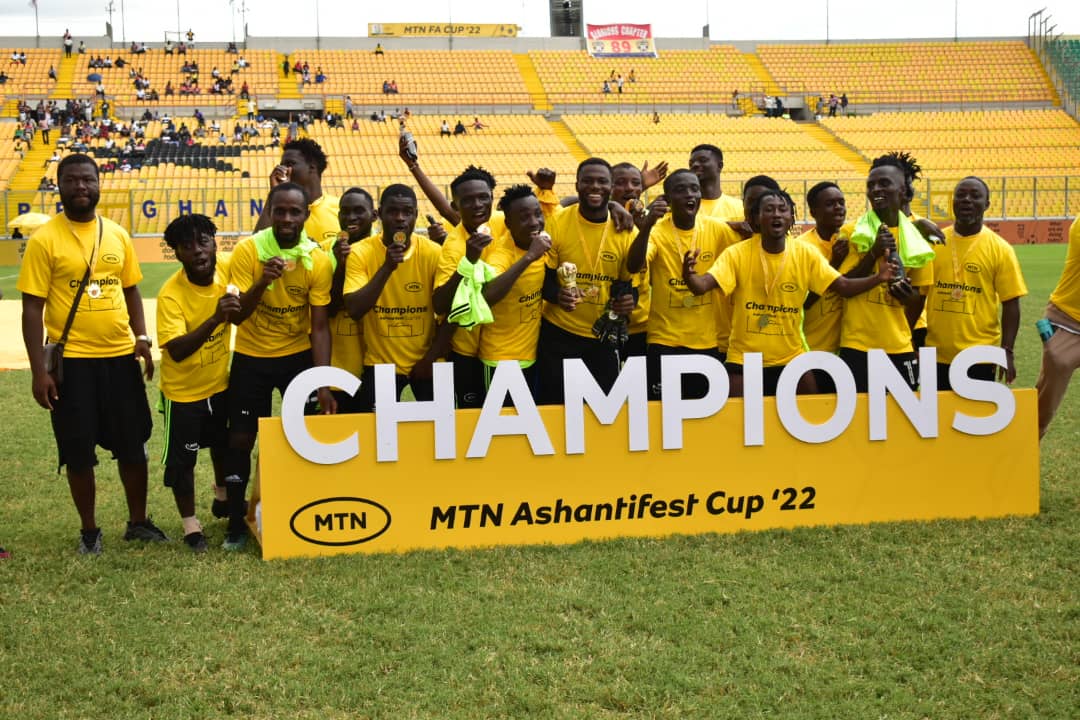 Tournament goalking, Ibrahim Wadudu struck a hat-trick in the final to inspire a dominant Old Tafo to a resounding 4-1 win over Asokwa to be crowned new recipients of the MTN Ashantifest Community Soccer trophy Sunday afternoon at the Baba Yara Sports Stadium in Kumasi.

Featured as a curtain raiser to the Ghana FA Cup final, also sponsored by MTN of course, Old Tafo sold sizzling football artistry that had the fans who came in early purring with excitement long before Accra Hearts of Oak and Bechem United took to the field for the cup decider, which the capital giants did knick 2-1 of course.

In the end, Asokwa were soundly beaten on the goals of treble hero, Wadudu of course and another from Richard Addai, reducing Evans Sarfo’s reply a mere consolation for the losing finalists.

Both sides had earned through to the decider of this year’s tournament by winning preliminary groups and semi finals of a competition which began on Wednesday at Bantama and Atonsu astro turfs and is MTN’s way of not only showing appreciation to their huge subscriber base during the annual traditional festival of the Ashanti people, but also serve as breeding grounds to unearth and nurture very good talents.

“The tournament was very successful and competition was top notch. We saw a major improvement as compared to last year with more enthusiasm displayed by the teams,” said Nii Adotey Mingle, General Manager of MTN Northern Business District.

“We look forward to involving more communities and make the event more popular to help unearth talents for the national teams and the Ghana Premier League,” he added.

Won by Abrepo last year after beating Kotei Deduako 5-4 on penalties in the final, this year’s event expanded from 8 communities in 2021 to 12 this term. Old Tafo of course, Tech, Abrepo, Asokore, Mampong, Aboabo, Fante New Town, Dichemso, Bantama, Asafo, Suame and Asokwa as well who all received one thousand Ghana Cedis (Gh¢1,000) appearance fee and a set of jerseys even before the first kick-off, also had the chance to win the grand cash prize of of twenty Ghana Cedis (Gh¢20,000), a trophy, gold medals and massive MTN airtime.

Asokwa captain, Issaka Konda was named the most valuable player of the week-long tournament

3rd place was taken by Tech after they defeated Dichemso 2-1 in the game of losing semi-finalists to also cash out, five thousand Ghana Cedis (Gh¢5,000) along with medals and MTN airtime as their reward.

In conclusion, Mr. Adotey Mingle pledged MTN’s determination to return with a bigger and better Ashantifest next year and make it more popular to attract more Ghanaians home and abroad, revealing a goal to make it as popular as the famous Kwahu Easter festival.

“This will boost tourism in the region and help serve a huge economic value to the people in the Ashanti Region, the MTN Northern Business District General Manager affirmed.