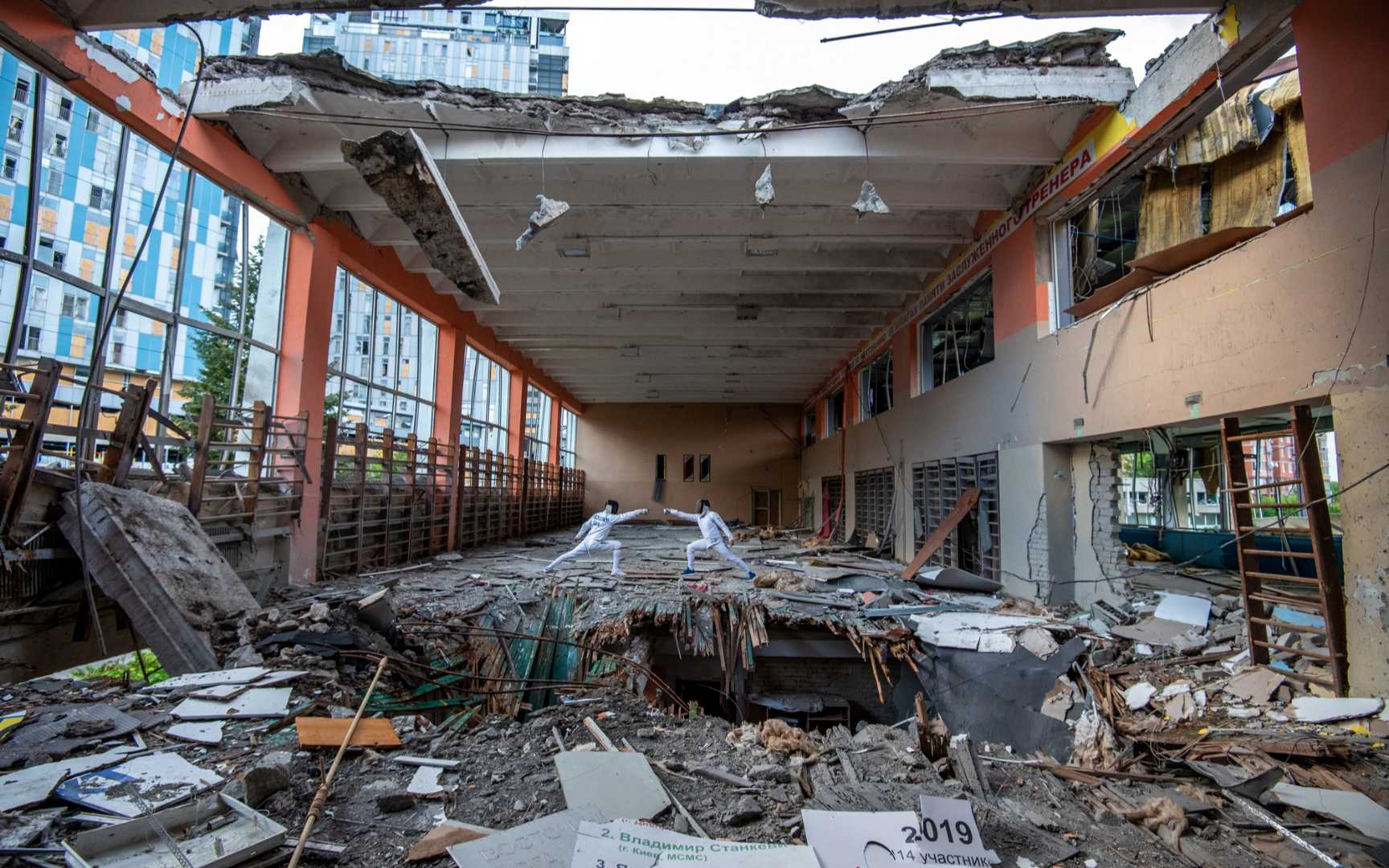 KYIV, July 1, 2022 – As a result of the ongoing war, hundreds of sports facilities in Ukraine have been damaged. But athletes do not only continue to train in the conditions of war, they also maintain an informational front.

“It hurts us to look at the destroyed sports halls, stadiums and our houses. We call on the whole world to support the boycott of the performances of Russian athletes and teams in any status at any competitions as long as the war continues in Ukraine. We appeal to all athletes, all countries – support our demands, convey the scale of the tragedy to the presidents of your sports federations. We just need your help right now to fight for our freedom, life and peace,” Ukrainian Athletes have stated.

Destroyed at the very beginning of the war. Instead of calls for breaks, a siren sounds here, warning local residents of the threat of an airstrike. Miraculously, the basketball court, located behind the school, survived. Children who stayed and live in Kharkiv can now train on it.

In recent years, this stadium has hosted games of the Ukrainian rugby league, as well as athletics training for athletes. In March, several air bombs were dropped on the stadium, which partially destroyed the stands and the covering of the athletics tracks.

Track and field athletes continue their running training on the undamaged surface, running past the site of the airstrike.

Near the pool, the roof was breached, the projectile went through the women’s locker room and broke the glass facade of the room where the pool is located.

On March 5, 2022, the aviation of the Russian troops bombed the “Unifecht” sports club of Kharkiv National Univercity. As the athletes themselves say, the plane with the bombs flew very low and pilot could not help but understand that it was blowing up an educational institution and residential buildings, not a military facility.

One of the bombs blew through all the floors of the fencing building, leaving the sport in the country without a major training center.

The youth basketball and gymnastics center experienced all the horrors of war when rockets bombarded the TV tower next to the complex. Broken windows, twisted parquet and a ceiling that collapsed in places.

In March, one of the rockets hit a residential building in the Obolon district of Kyiv. Surprisingly, the football field near the house remained intact and even now children’s football teams practice and play on it.

The hall is located on Prospect named after Valery Lobanovskyi was fired upon in February and suffered significant damage, of which only the roof has been partially restored. Bodybuilders and fitness bikinis of the Ukrainian IFBB national team train here, now they are training for the international competitions “Arnold Classic Europe”. Athletes of the FBBU say that they are boycotting all tournaments in which representatives of Russia and Belarus will be admitted.

An exhibition of Russian equipment that burned down on Mykhailivska Square.

At the entrance to the suburbs of Kyiv, a huge pile of burnt cars can be seen. They were collected in the form of a wall so as not to obstruct the passage of the road. But there is enough space nearby on the court to play basketball.

Center of the Tennis Federation of Ukraine

The new tennis courts were supposed to host a children’s tournament after February 24, but were shelled and bombed for a month. The tension dome of the covered part of the courts was completely destroyed, and other courts were left with peeled and burnt marks from the coating and bomb pits.

All photos were taken in Kyiv, Kharkiv and the city of Irpin in June 2022 by photographer and USPA Member Mykola Synelnikov.