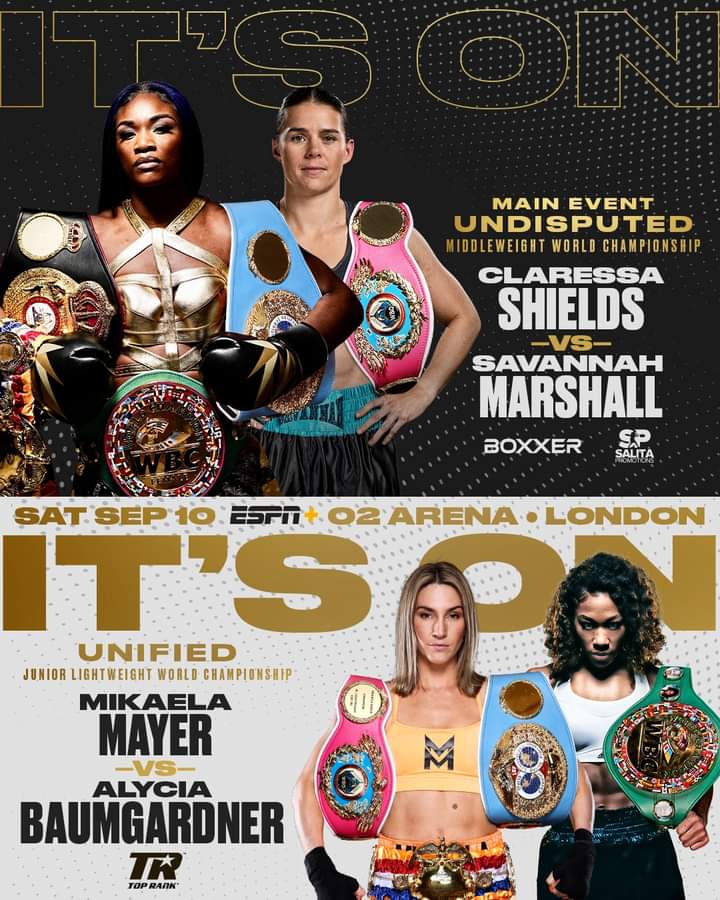 Two heated rivalries will come to a head Saturday, Sept. 10 in a historic championship doubleheader at the O2 Arena in London.

Shields and Marshall faced off as amateurs, with Marshall edging Shields by decision at the 2012 AIBA Women’s World Championships in Qinhuangdao, China. Shields went 77-1 as an amateur and is the only female boxer to win undisputed titles in two weight classes.

In the co-feature, Mikaela Mayer will look to get one step closer to becoming the first undisputed champ in her division by putting her WBO/IBF/Ring Magazine junior lightweight titles on the line against WBC champion Alycia Baumgardner.

A total of seven world titles and two Ring Magazine belts will be on the line.

Promoted by Salita Promotions and Boxxer, in association with Top Rank, Shields-Marshall, Mayer-Baumgardner, and undercard bouts will stream live and exclusively in the U.S. on ESPN+

Mayer (17-0, 5 KOs) is a Los Angeles native who achieved international recognition when she represented the U.S. at the 2016 Rio Olympics. The following year, she signed with Top Rank and unleashed an impressive run of victories, including a one-sided decision over Ewa Brodnicka in October 2020 to capture the WBO 130-pound title. In 2021, she unified the WBO and IBF titles in an action-packed slugfest against Maiva Hamadouche, which also earned her the Ring Magazine belt. In her last outing, she retained her titles with a decisive win over former champion Jennifer Han. Mayer is confident that she will take a positive step forward toward becoming undisputed champion.

Mayer said, “I’m here to make the biggest fights possible, so I salute my team for making her an offer she couldn’t refuse. Huge thanks to Boxxer, Top Rank, Salita Promotions, ESPN and Sky Sports for working together to co-promote such an iconic event! I am ecstatic to finally be making my UK debut and to share the stage once again with my Olympic sis, Claressa Shields. I LOVE this era of women’s boxing because we are re-writing the narrative and working to give our supporters the fights they DESERVE. To date, I’ve accomplished all I said I was going to do, and this next fight will be no different. I have all the tools and experience I need. There are levels to this sport, and she’s nowhere near mine. You can bet on it.”

Baumgardner (12-1, 7 KOs) is a five-year pro who burst onto the scene by traveling to Sheffield, England, to challenge WBC champion Terri Harper. Though fighting on enemy turf in front of thousands of British fans, the native of Fremont, Ohio landed a perfectly timed counter right hand that knocked Harper out on her feet. Baumgardner then made the first defense of her crown in April with a shutout decision over former unified world champion Edith Soledad Matthysse. After months of exchanges on social media, Baumgardner did not mince her words about Mayer.

Baumgardner said, “When we are both gray and old, Mayer is still going to be having Alycia Baumgardner flashbacks. When she is lying horizontally in the ring, Mayer will think back to the first time my name left her mouth and she’s going to wish it hadn’t. I guess we’re going to find out if Regina George has a chin. Not only will Mayer feel my power, but her descendants are also going to feel what I do to her. Not only will I take Mayer’s belts, but I’ll take everything from her. She’ll be lucky if I let her keep her name. If I’m not haunting her dreams before the fight, I will be after it. If you come at the queen, you best not miss. On the bright side for Mayer, a loss to me will be the best result on her resumé.”