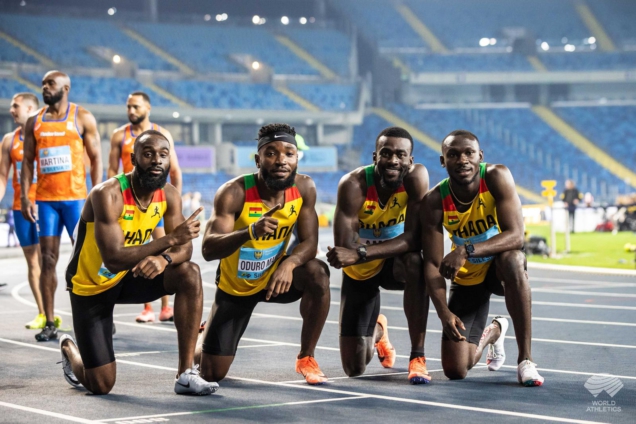 Ghana goes in search of a medal at the World Athletics Championships for the first time in 16years. Vida Anim was the last athlete to win a medal for the country. She achieved the feat in 2006 at IAAF World cup in Athens Greece.

Winning another medal has eluded Ghana for close to two decades. Still, there is palpable confidence that Ghana‘s current athletes will show at the World’s Athletics Championships which will take place from 15th July to July 24 in Oregon, USA.

Final entry lists for the World Athletics Championships Oregon22 confirm that more than 1900 athletes from 192 teams will be in action at Eugene’s Hayward Field between 15-24 July. Of the 43 individual winners from the 2019 edition, 37 will defend their titles in Oregon. 42 individual gold medallists from last year’s Olympic Games in Tokyo will also be in action.

Here is a profile of the seven athletes who carry the hopes of many Ghanaians who will be watching the all through:

Sprinter and National record-holder, Benjamin Azamati, will participate in the 100m and 4x100m events at the world athletics championships in Oregon. The ASICS Athlete who recently won the 100m race at the Diamond League meeting in Paris turned pro a few weeks ago and is joint ninth alongside America’s Elijah Hall by the World Athletics world rankings for 2022. Azar made history by breaking a 22-year national record held by Leo Myles Mills on 26 March 2021 in Texas by clocking 9.97 seconds to qualify him for the Tokyo Summer Olympics.

Azamati set a new national 100m record in March after he run a sizzling 9.90s at the Texas Relays and went on a record-breaking rampage during his time as a member of the West Texas A&M University Track and Field team in the United States. In 2021 he won the 100-200m sprint double at the NCAA division two outdoor championship in Michigan. His national 100m marks in 2021 and 2022 were also NCAA division two records, while his 9.90s is the fifth-fastest time in NCAA history regardless of division. He made a promising Diamond League debut finishing in fourth at the Bislett Games in Oslo with a time of 10.15s. Canada’s Olympic 200m champion Andre De Grasse crossed the line in first place with 10.05s.

Deborah Acquah will feature in the Long Jump in Eugene after setting a new national record of 6.89m (+0.07) at the LSU meeting earlier this year, In August 2019, she competed at the 2019 African Games in Rabat and won a silver medal for Ghana with a jump of 6.37m in the Women’s Long Jump. She also competed in the NCAA Division 1 Championships in Austin, Texas and won a bronze in the women’s long jump In January 2020, her 21-foot six-inch-long jump broke a 22-year school record by four inches at the Ted Nelson Invitational In February 2020, she broke the Texas A&M triple jump record to win first place at the Charlie Thomas Invitational.

In April this year, Acquah jumped 6.89 m in the long jump event during the Texas Dual meet to set a new Ghanaian national record. With that jump, she ranked at number two in Texas A&M history. Based on that time, she qualified for the 2022 World Athletics Championships and will be hoping to impress on the World stage.

National Record Holder Joseph Paul Amoah will participate in the 100m, 200m and 4×100 m relays events as well. At the 2019 Mid-Eastern Athletic Conference Championships in May, Amoah became the first Ghanaian in any sport to qualify for the 2020 Summer Olympics by running 200 meters in a personal best time in 20.20 seconds. It was the fastest performance from a Ghanaian since 1995 and also qualified him for the 2019 World Athletics Championships.

Later in June of that season at the NCAA Division I Championships, he improved his personal best times in the 100 meters and 200 metres to 10.01 seconds and 20.08 seconds respectively. He broke three-time Olympian Emmanuel Tuffour’s 24-year-old Ghanaian record in the 200 metres (20.15 seconds, set at altitude), and qualified for the 2020 Summer Olympics in the 100 metres.

This year after a long Lay of Amankwah has put in the work and has been consistent with his performances- Amankwah qualified for the Championships after running a time of 1:44.97 in the 800m at the Maryland Qualifier at Prince George’s Sports & Learning Complex, Landover, MD. Amankwah also made a time of 1:15:88 in 600m at the Penn relays a month ago and is Ghana’s national record holder in the 800m event with a time of 1:44.80 which he set in 2017.

Manu was selected to represent Ghana at the 2021 World Relays on 1–2 May in Poland, which served as a qualifier for the 2021 Olympic Games and the 2022 World Championships for Ghana. Manu run a season’s best of 10.01s at the Billy Hayes T& F Complex, Bloomington, Usa and will be looking to help team Ghana on the tracks in Oregon.

Emmanuel Yeboah is the final member of Ghana’s 4x100m relay team. He currently competes at Texas A&M University. Yeboah was selected to represent Ghana at the 2020 Summer Olympics in the Men’s 4 × 100 m relay. Emmanuel run a season’s best of 10.20s at the John McDonnell Field, Fayetteville, in May.