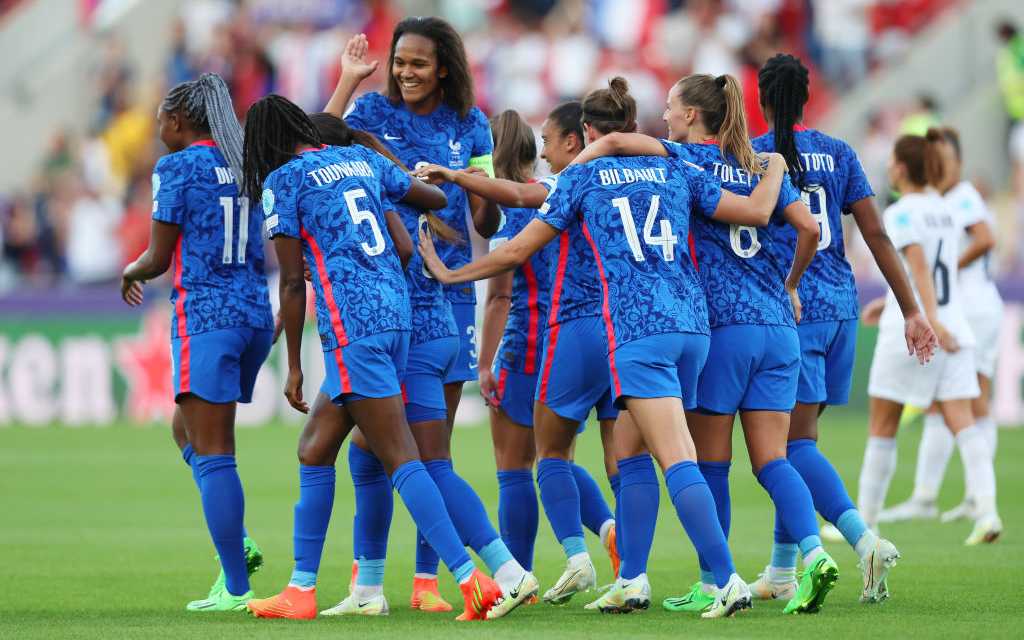 Grace Geyoro of France celebrates with team mates after scoring their team’s fifth goal during the UEFA Women’s Euro 2022 group D match between France and Italy at The New York Stadium on July 10, 2022 in Rotherham. (Photo by Naomi Baker/Getty Images)

Many emotions and goals were shown in the first weekend of the UEFA Women’s EURO 2022 campaign. After the first four matches of the group stage from Group A and Group B, the very first verdicts were made on a Saturday and Sunday of great football, which once again showed not only the quality of the game but also the excitement and the heat by the fans gathered from all over Europe to take part into a true celebration of football.

Three draws (Portugal-Switzerland 2-2, The Netherlands-Sweden 1-1 and Belgium-Iceland 1-1) and five goals marked by France against Italy completed Day 1 of the group stage campaign.

The first draw in this Euro 2022 campaign came in the fifth game of the women’s European Championship group stage. In the first match of Group C, at Leigh Sports Village in Leigh, the clash between Portugal and Switzerland ended up with a 2-2 as the final score. Nils Nielsen’s team perfectly approached the first half of the match: after only five minutes of playing they already doubled the score thanks to Paris FC midfielder Coumba Sow and Zurich star Rahel Kiwic, who perfectly led the defensive department in the first 45 minutes, not giving to the Portugal team many chances for a comeback.

In the second half, however, Cláudia Neto and her mates made a dramatic comeback after an eager and quality reaction. At minute 58 Diana Gomes shortened the distance in score on the development of a corner kick, after a header saved by Betis goalkeeper Gaëlle Thalmann. Eight minutes later the score was eventually tied by Benfica striker Jéssica Silva. During the second half, Portugal’s organisation and attitude made them lead the game, balancing the game in comparison with the first 45 minutes. Both teams could have won the game, considering all 90 minutes; the teams shared one point per part.

On the other side The Netherlands started this Euro 2022 campaign with a draw against Sweden. 1-1 was the final score registered at Bramall Lane Stadium in Sheffield. The defending champions had some difficulties in the first half: the Swedish team put organization and enthusiasm into their game, unlocking the score after 35 minutes of playing. Chelsea defender Jonna Andersson marked the first goal in the Sweden campaign with a chance born from AC Milan forward Kosovare Asllani’s football inspiration.

In the second half, at minute 52, the equal of Jill Roord from Wolfsburg, on an action from the left by Arsenal striker Vivianne Miedema. Final substitutions – Blackstenius, Kaneyrd and Bennison in place of Hurtig, Andersson and Angeldal respectively for Sweden and Pelova and Beerensteyn in place of Van de Donk and Roord for The Netherlands – did not change the score, which ended with a draw and one point shared per part. Four teams with one point then in Group C after Day 1.

BELGIUM-ICELAND, ONE POINT PER PART

Belgium and Iceland shared the stakes in the first match of group D, the same group as Italy and France. The clash at Manchester City Academy Stadium showed the respective qualities of both teams: more manoeuvres and organization by Belgium, more physical and run by Iceland. Everything happened in the second half, after the first 45 minutes of balance shown on the field: Brann striker Berglind Björg Thorvaldsdottir – after having missed a penalty in the first half after the VAR decision to concede the kick for a handball by Philtjens – unlocked the score at minute 50.

17 minutes later Reading forward Justine Vanhaevermaet found the equalizer shot from the penalty kick, after another handball, this time from Brynjarsdottir. A general balance between the two teams made the final score unchanged until the end of the confrontation. Therefore a third draw came out from the first weekend of this Euro 2022 campaign.

Grace Geyoro of France celebrates with team mates after scoring their team’s fifth goal during the UEFA Women’s Euro 2022 group D match between France and Italy at The New York Stadium on July 10, 2022 in Rotherham. (Photo by Naomi Baker/Getty Images)

The French national team made a brilliant debut in their Euro 2022 campaign by overcoming Italy on Day 1 with a flashy 5-1 at New York Stadium, Rotherham. Corinne Diacre’s team maintained control of the match from the very first beginning, scoring all their five marks in the first half: PSG midfielder Grace Geyoro unlocked the score after nine minutes, marking the goal two more times in the match (at minutes 40 and 45). Italy could not resist France’s enthusiasm, conceding two more marks in the first half scored by Paris Saint Germain striker Marie-Antoinette Katoto (12’) and by OL attacker Delphine Cascarino (minute 38).

The so-called flag goal was marked for Italy during the second half when France decreased the rhythm of the match by deciding to control the score: AC Milan striker Martina Piemonte scored the first goal in the Italian campaign at Euro 2022, making their loss less bitter. Italy, which had lost only one of their last 18 games (against Switzerland, 2-1 in the world qualifiers in Palermo) will have to react immediately, counting on the fact that the draw between Iceland and Belgium made their loss at the debut less bad. On the other hand, France leads alone Group D with 3 points, having given their opponents a clear signal for the outcome of the tournament.

Find below the standings of the 16 teams that are competing in the final stage of the UEFA Euro 2022, at the end of Day 1: