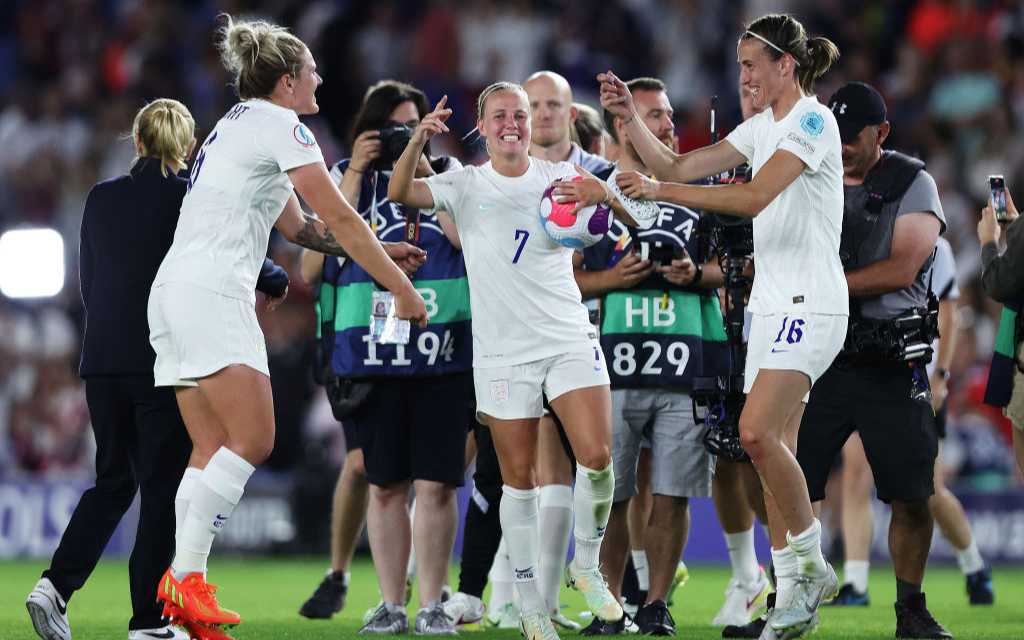 The twists, emotions and goals have continued to flow in the UEFA Women’s EURO 2022, with England enjoying a record-breaking 8-0 victory over Norway on Matchday 2 to make sure of a place in the quarter-finals.

Since 6 July, teams that represent the excellence of European football have been going head to head with the aim of claiming the continental crown, and the overwhelming interest in the tournament marked by record attendances is proof to the development of women’s football in Europe and beyond.

England made this edition of the Women’s EURO even more memorable with their ruthless and record-breaking performance against Norway, in front of more than 28,000 fans. No team in the history of the European Championships (both men and women) had ever scored more than six goals in a match.

A very strong signal for competition has been sent from AMEX Arena in Brighton: the team coached by Sarina Wiegman can count on not only the support of their fans but also on a talented, passionate squad that truly wants to achieve victory in the tournament for the first time in their history.

LIKE NONE BEFORE As mentioned earlier, the Lionesses’ achievement against Norway is a first in the history of the competition – scoring eight goals in a single game. This number had been reached only two times before yesterday and only by combining goals from both teams on the field: The 2005 clash between Norway and Italy in Preston in the group stage of that year’s edition (5-3 was the final score in favour of Norway) and the 2009 dramatic clash between England and Germany in Helsinki (6-2 was the final score in favour of Germany).

THE MATCH Leah Williamson and her teammates approached the match in Brighton with the right attitude from the very beginning, after their hard-fought 1-0 over Austria on Matchday 1 at Old Trafford in front of more than 68,000 fans. Enthusiasm and organization were key factors in the tactics of Sarina Wiegman’s team, putting Norway in trouble from the start.

In the 12th minute, Bayern Munich forward Georgia Stanway opened the scoring from the spot after Ellen White was fouled Manchester United defender Maria Thorisdottir. It took only three minutes for England to double the score: although Manchester City striker Lauren Hemp was initially flagged offside, the decision was overturned by VAR, with both Hemp and White onside. In the 29th minute another duel between White and Thorisdottir was won by the Manchester City player, who stole the ball to give England a 3-0 lead.

Bethany Mead’s hat trick (in minutes 34, 38 and 81) – which makes the Arsenal striker the current top scorer of the tournament with four goals – Ellen White’s second goal and a final strike by Manchester United forward Alessia Russo totally overcame Norway, as England gave a clear signal to all rivals.

SARINA WIEGMAN’S FACTOR A key element not to be underestimated is also the experience and achievement of coach Sarina Wiegman. She holds a peculiar record when it comes to European Championships: in the two editions she has attended so far as coach she holds a 100% win record. In 2017 her leadership and technical knowledge helped The Netherlands to victory with 6 wins from six matched. Now she wants to repeat that achievement with England and from this first stage of the competition, there are promising signs for England fans who want to celebrate the title for the first time in their history.

With this record-breaking result, England ensured a spot for themselves in the next stage of the tournament as the first to qualify from Group A. In the other clash of the group, Austria overcame Northern Ireland 2-0, making Kenny Shiels’ team mathematically the first to be knocked out of the competition. Katharina Schiechtl scored the opener with a fancy free kick from a distance in the 19th minute. The second goal came in the final minutes of the match through Hoffenheim defender Katharina Naschenweng. On the final day of the group stage, Norway and Austria will fight for second place in Group A which will ensure a spot in the quarter-finals.

CURRENT STANDINGS Find below the group standings updated after matches occurred on July 11: