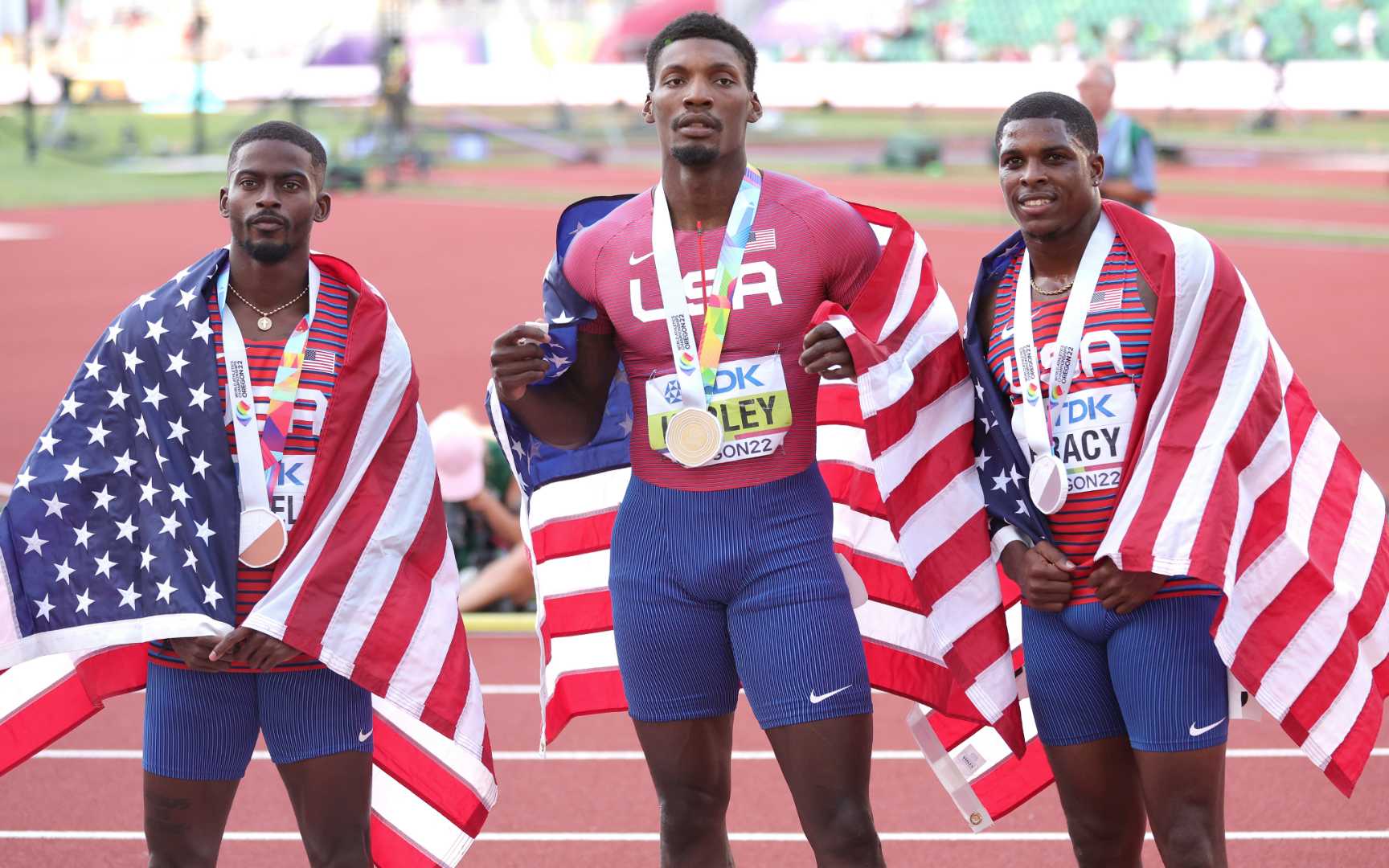 The job is done: Fred Kerley has won the gold medal after a thriller of a run in the 100m final at the World Championships at Hayward Field. But the mission is not over, as he said.

There were a few seconds of silence before the start, as the pressure was building, then at the sound of the starting pistol Hayward Field erupted. The 27-year-old sprinter from Texas had all eyes on him.

The pressure he built by himself in the last months. “The Legend”, as the devout christian calls himself, wanted the title badly after taking home silver at last year’s Olympics. “Silver is not enough – I wanted gold,” he said at the time. Now he achieved that by winning the final in Eugene in 9.86s and enjoying the cheers and admiration from the audience, with many standing for minutes after his run. “I ran around the whole crowd. It is a blessing to have the gold medal on my neck,” he said to AIPS Media and added: “The job is only done for today. We got some work for the next week.” Kerley is in the starting list for the 200m event.

The word “blessed” is also one of his 12 tatoos. “It is a blessing to be in my position in life, coming from I come from. I am thankful for the opportunity to get the gold medal.” For him tattoos are messages to himself every day to just keep on going and not take anything for granted. It’s like a stamp, a passport, a way to remind him of where he is going, in track and in life.

Having switched his concentration to short sprint distances since 2021, this was Kerley’s first World Championships as a main performer on the big 100m stage. In 2017 and 2019, he was still competing in the 400m, finishing seventh and third respectively and claiming gold in the 4x400m in 2019. After an injury, the 27-year-old decided to concentrate on the 100m and 200m.

This is a life story that could have turned out differently. As a toddler, Kerley and his four siblings were adopted by his aunt Virginia. She raised 13 children with them, not all of them were always fed. As a teenager, Kerley almost ended up in jail. He then made it to college through sports.

It is a story every American loved to watch. Asking people around the stadium before the race, many wished for that happy end. But most likely they wanted any US athlete to win the most popular event at the World Championships. And they got three of them. With Marvin Bracey (+0.02) and Trayvon Bromell (+0.02), two more US sprinters turning up the heat at Hayward Field.

“It was a great experience, a great moment for the whole team,” Bromell said to AIPS.

“It is something we talked about, it is something we dreamed about and now we did it. It is nice that dreams finally come true.” Silver medallist Marvin Bracey added to that. But for him it felt more like a lost gold medal, than a winning silver medal.

It is the third American sweep of the 100m medals and the first since 1991, when Carl Lewis, Leroy Burrell and Dennis Mitchell went 1-2-3 at the World Championships in Tokyo. This time, it was on home soil, at the first World Championships being held in the United States, in front of a proud and loud crowd who cheered their hearts out.

Can this success have an impact in the general meaning of track and field in the US outside Hayward Field?

“Not really,” says Ken Goe, US journalist for Oregonian. He covers Track and Field since 1988 and does not believe, that American people will rank track and field higher than other popular US sports like American Football or Basketball after this world championships.

Nevertheless they will honour the performances, the US athletes give, Goe is sure about that. Bracey does not agree with Goe. “It will definitly have an impact on the whole nation. I think that it is now an expectation to keep, expecting us to do these things.”