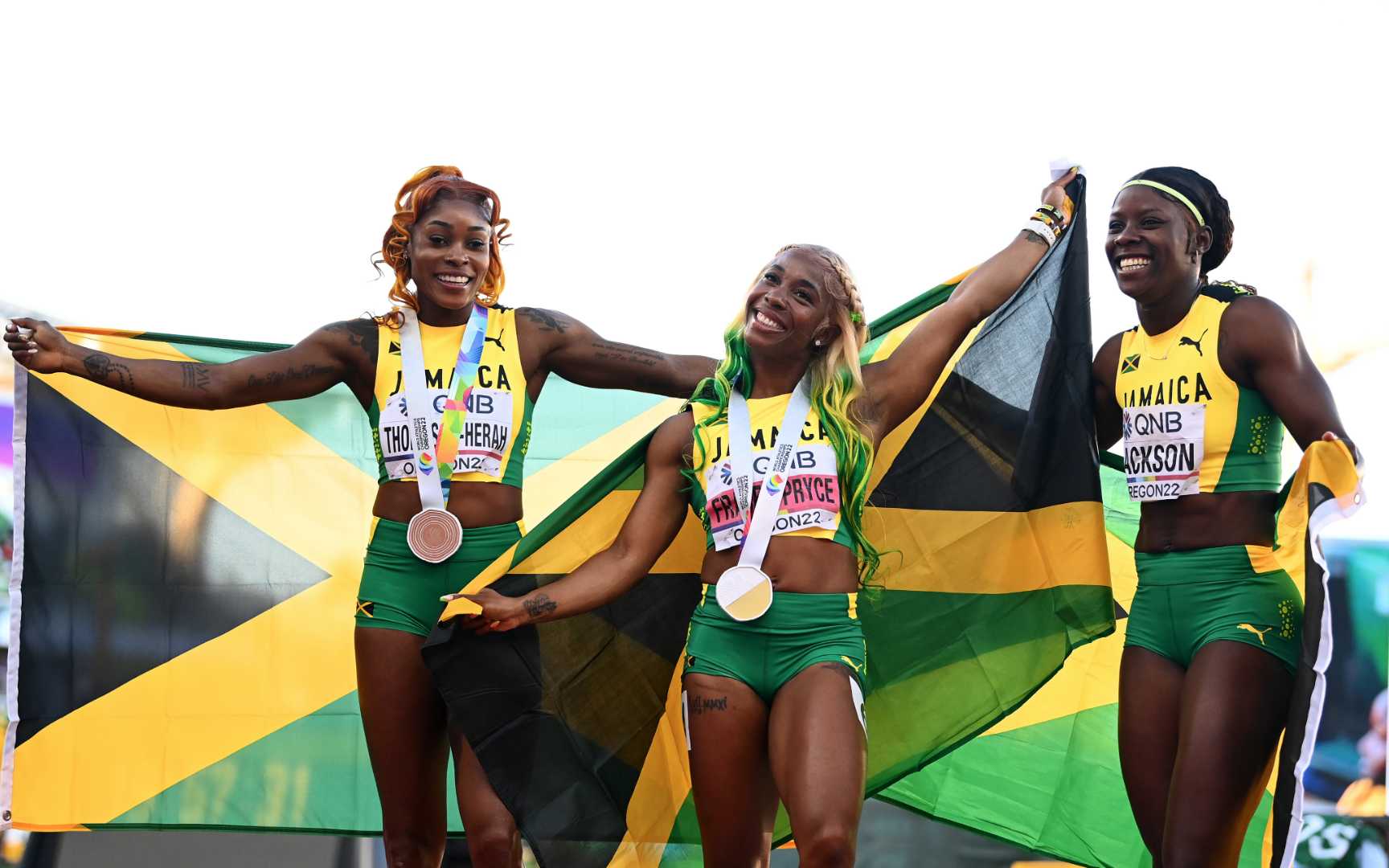 There were three Jamaicans in the women’s 100m final of the World Athletics Championships at Hayward Field, in Eugene, Oregon on Sunday and they collected all the medals on offer, as largely expected. They were led by Shelly-Ann Fraser-Pryce aka “Pocket Rocket” who was quickest out of the blocks and fastest to the finish, running a championship record of 10.67 seconds to win her fifth world title.

“It is special and I am doing this at 35, yes I said 35. So I am grateful for that,” said the Jamaician with the green and yellow hair – different from the colours she wore during the heat. In reality she has long black hair. However, she chooses to wear coloured wigs. Her 10.67s betters the mark of 10.70 set by Marion Jones (USA) in 1999. Fraser-Pryce became the first person to win five world titles in an individual running event and broke Justin Gatlin’s record as the oldest world champion in an individual event on the track. “I am a competitor. I have to compete and I believe that God has given me a gift, and I somehow feel special,” the gold medalist said with a smile.

One of the highlights of the last championships in Doha was Fraser-Pryse claiming the gold medal in the women’s 100m 13 months after giving birth to her son, Zyon. That win meant a lot to her and she did a lap of honour with Zyon in her arms. Fraser-Pryce has now won five of the last seven world titles, in 2009, 2013, 2015, 2019, and 2022.

She wasn’t the only Jamaican athlete who had reasons to smile. Shericka Jackson (10,73) won the silver medal and Olympic Champion Elaine Thompson-Herah (10.81) completed the green-black-yellow podium at Hayward Field. That sweep was something special, because it is the first at the women’s 100m women’s at world championsships at all. “It is good to be part in history and be part of that book,” Thompson-Herah said in an exclusive Interview after the race and Fraser-Pryce added: “It was definitly on the card, and I am glad that I was the one finished first in that sweep.“

Elaine Thompson-Herah has never won an individual gold medal. in world championship, except for gold at 4×100 relay in 2015. “I wanted to win, but Iam not in the shape of my life and I struggled earlier this season, but I still managed to get a medal tonight,” the 30 year old sprinter added.

PROUD BUT THE JOB IS NOT FINISHED

The first to enter the mixed zone after the final was Shericka Jackson. As fast as she could she managed to past through the waiting journalists. In an AIPS Interview the silver medallist admited: “I am feeling tired, just want to go home and get some rest. I run in 200 tomorrow so I definitly go home and get some rest.” Asked about her feeling on being part of the golden generation she smiled and said: “Yes, we change our eircode to 1,2,3.” The Jamaican sprinter has been in a new phase of her career. Since winning the 100m bronze in Tokyo Olympics, she set a buzz ahead of the World Athletics Championships in Oregon. Incidentally, when she started athletics, Shericka was not a child prodigy. She did not win anything during her formative years. She considered herself a ‘slow runner’ for 100m and 200m dashes. Now the 28 years old is a world championships silver medallist in the 100m and a favourite to win another medal in the 200m.

“IT IS IN OUR BLOOD”

Paul Reid, journalist of the Jamaica Observer was speaking about a golden generation and is sure: the people of jamaica will celebrate the whole night. “Track and Field is in our DNA, it is in our blood. We have competition for the under 10 children. Since Usain Bolt we had a gap in quality, but this is our golden generation”. The party already started in the stadium. Visitors in the staidum – with hundreds of Jamaicans – celebrated these three women and they spent time with the fans  took their time with the fans by taking pictures.

“I could not count, because there were lots of selfies and I enjoyed it.”

An atmosphere, nearly comparable to the US clean sweep in the men’s 100m a day ago. Eugene seems to be enjoying these first world championships in the USA. In Addition to that, US athlete Grant Fischer, 4th in the 10,000m, said regarding the crowd at Hayward, “It felt like we’re a real sport, like the NBA or NFL.”