The tattoos of Marcell Jacobs and Fred Kerley, the fastest men - Kerley wins 12 to 7 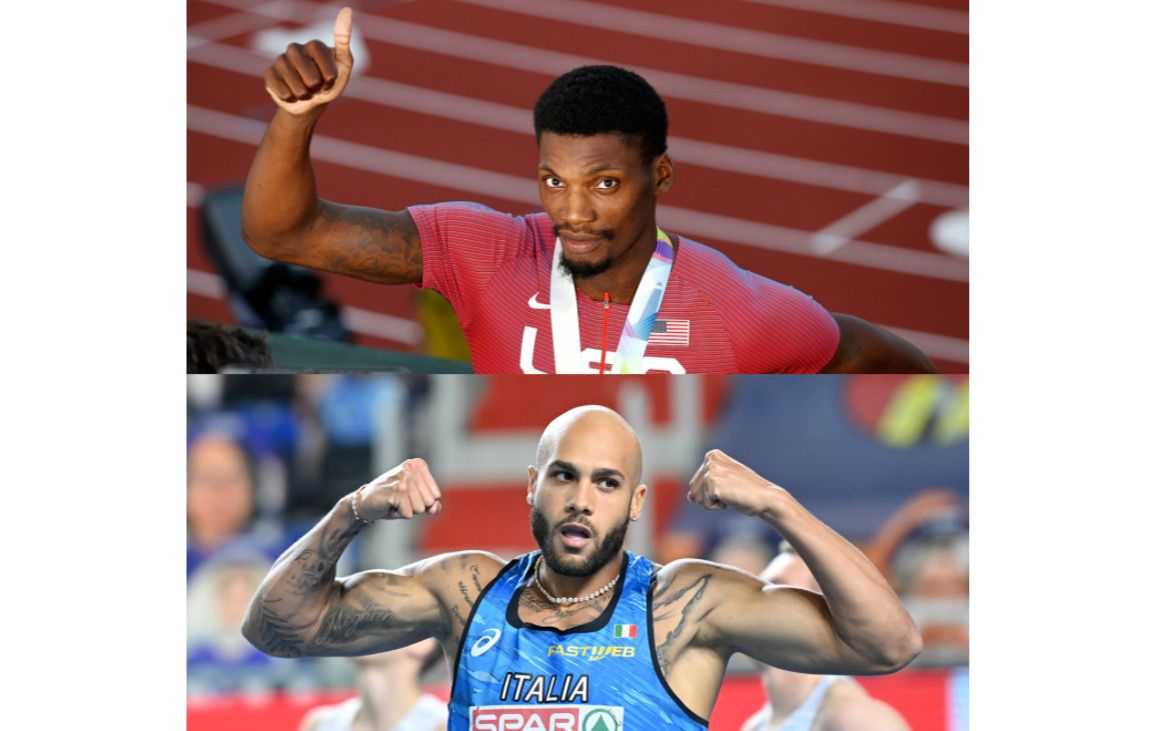 Marcell Jacobs was forced to give up the challenge against Kerley in the 100 meters of the Eugene World Championships, who was looking for a rematch after being beaten at the Tokyo Olympics, but the two champions will undoubtedly be the protagonists of the sprint for the next few years. But we found a detail that unites them, in addition to the fact that they were both born in Texas and the passion for sprinting: the tattoos with which they express themselves. Even the Canadian De Grasse, Olympic champion of the 200 and third in the 100 in Tokyo behind Jacobs and Kerley, loves to have his skin drawn, but he has only 5 tattoos against Jacobs’s 7 and Kerley’s 12 … Here are the studies that are made in Italy by Valeria Paglionico for the Fanpage. its site and in the United States by Bodyartgutu.com

Marcell Jacobs, all the tattoos by Fanpage.it

The tattoo with the dedication to the family
On his left shoulder, Marcell Jacobs has a phrase tattooed with which he paid homage to the concept of family to which he is very attached. With indelible ink it is written: “Family. Where life is born and love never ends”, proving that he could not live far from his partner Nicole and their children.

The compass rose tattooed on the abdomen
On the upper part of the abdomen, just above the navel to be precise, Marcell Jacobs has the rose of the times tattooed. The reason he explained in several interviews: it represents his compass, the symbol that helps him to never lose orientation and to give the right weight to the events of life.

The quote tattooed on the chest
Among Marcell’s, most eye-catching tattoos is the one he left behind on his left breastplate. What does he represent? It is a long writing in italics that reads: “It is really nice to fight with persuasion, embrace life and live with passion. Losing with class and winning by daring because the world belongs to those who dare”. Movie buffs will surely know that this is a Charlie Chaplin quote.

Tattoos that pay homage to children
For Marcell Jacobs, family is everything and that is why he has his children imprinted on his skin. He allowed their names to be tattooed on different parts of his body: the name of Jeremy, the eldest son he had when he was only 19, is on his left breastplate, Anthony is instead on his stomach, while the latest arrival Megan has been reserved for the right bicep.

The nickname tattooed around the neck
Marcell Jacobs also has a tattooed neck: just below his throat, he left the words “CrazyLongJumper” imprinted with indelible ink, a reference to his talent in the long jump. Unsurprisingly, he also used this nickname on Instagram (his account is called just that).

The tiger tattooed on his back
Marcell Jacobs called the tiger the animal that best represents him and that’s why he got it tattooed behind his back. What is its symbolic meaning? It is a synonym for power, strength, sensuality, passion, ferocity and beauty.

The cross on the arm
Marcell Jacobs has his right arm completely tattooed but there is one design in particular that cannot go unnoticed, the one on his shoulder that depicts a cross planted on a ground covered with skulls. It is decorated with the words “Believe” and with a king’s crown. What is its significance? The athlete has never talked about it but it could be a symbol that helps him to always believe in himself when everything seems to be lost. Marcell Jacobs has a cross tattooed on his right shoulder

FRED KERLEY: here are his tattoos by Bodyart

“To me, the tattoos are messages to myself every day to just keep on going and don’t take anything for granted. It’s like a stamp, a passport, about a place I’ve been or a thing I’ve experienced, a way to remind me of where I’m going, in track, and in life.”

‘Aunt Meme’ Bicep Tattoo
On the inner side of his biceps, Fred has got the name of his aunt inked as ‘Aunt Meme’. Meaning: Fred claims that this is the closest one to his heart. It reminds him that Aunty Virginia was always there for him and he could have never reached the point in his life where he is today without her support. He got this tattoo to stay in touch with her every day and everywhere he goes till he is alive.

“Without her, I don’t know what my life would be like right now. I don’t know where I would be at, if I would be with my parents or else getting into trouble. She’s the woman who changed my life, who made my life. She will always be my strength.”

‘Virgin Mary’ Tattoo
On his right upper arm, Fred has got the portrait of the Virgin Mary tattooed. Meaning: Virgin Mary represents unconditional love, care, hope, and affection. She is symbolic of motherly love, a restorer of faith, happiness, and comfort, and is a tattoo choice for those who seem to seek help from the heavens for such motherly love and care. We can totally understand Fred’s choice for Virgin Mary’s tattoo because he loved his Aunt Meme too much who always took care of him. Virgin Mary’s tattoo shows how Fred wishes to have a mother like her. Also, pointing toward his religious beliefs and faith i.e. Christianity.

‘Blessed’ Tattoo
On his right forearm, Fred has got the word, ‘Blessed’ tattooed. Meaning: He got this tattoo to represent all that God has poured upon him from above and the success that he has always achieved. The tattoo represents his reliance and faith in God.

“‘blessed’ because the way my life has turned out, I know I’ve got all kinds of blessings coming my way from above”.

‘Cross with Angel Wings’ Tattoo
On the top side of his left shoulder, Fred has got a cross with angel wings inked. Meaning: Cross is the Holy Symbol of Christians. When combined with wings, it represents the guardian angel. Some people also get it inked for someone close who is no more alive. The tattoo shows Fred’s faith in God and his blessings.

Flying Sparrow on Shoulder Tattoo
On the top of his cross and angel wings tattoo, Fred has got another flying sparrow inked. Meaning: Sparrow tattoo is the symbol of positivity. It is a symbol of friendship, care, power, and empowerment. Some people also believe it to be symbolic of simplicity in life.

‘Angel Wings and Praying Hands’ Tattoo
On the top side of his left shoulder, Fred has got a cross with angel wings inked. Meaning: Cross is the Holy Symbol of Christians. When combined with wings, it represents the guardian angel. Some people also get it inked for someone close who is no more alive. The tattoo shows Fred’s faith in God and his blessings.

Bird on Chest
There is a flying sparrow tattooed across the top of Fred’s chest area. Meaning: Flying bird is the symbol of freshness, freedom, optimism, love for family, and independence.

‘Roses’  Tattoo
There are roses tattooed on Fred’s right upper arm. Meaning: Roses are the symbol of love, affection, and hope. The five petals of the rose represent the five wounds that Jesus Christ suffered on the crucifixion. The red rose is the symbol of Jesus’ bloodshed during the time whereas the white one represents his sacrifice which he did for the sake of humanity.

‘Scripture Verse-Psalm 104’ Tattoo
On the right side of his stomach, Fred has got the tattoo of the Scripture Verse, Psalm 104. It is actually the longest Psalms and is divided into 35 verses.  It says, “Bless the Lord, O my soul. O Lord my God, thou art very great; thou art clothed with honour and majesty.” Meaning: Fred got this tattoo when he was just 12 years old. It was his first body tattoo and he had to hide it from his Aunt Virginia for a long time. This tattoo was a gift from himself to himself and he got it done from a street tattoo set.

“Where I come from, everybody gets tattoos. I had my first when I was 12, which I didn’t tell my aunt about until much later. It was a scripture verse, Psalm 104, and I got it as a birthday gift. It was a street tattoo, which you could get for about $200 compared to $1000 at a tattoo shop.”

Rosary Beads Tattoo
Alongside his praying hands and angel wings tattoo, Fred has got the rosary beads inked too. Meaning: Rosary beads are the symbol of protection and safety, and are believed to be used to keep away demons and evil spirits from oneself. The rosary itself represents the Virgin Mary and people get this tattoo to feel safe and remain under the guidance and protection of Jesus Christ and Mary.